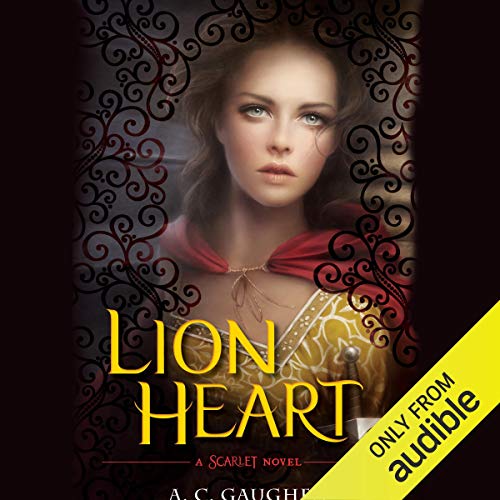 Only the greatest loves can survive great danger.... Imprisoned by Prince John for months, Scarlet finds herself a long way from Nottinghamshire. After a daring escape, she learns that King Richard's life is in jeopardy, and Eleanor of Aquitaine needs Scarlet's help to free him. For a lifelong thief, this newfound allegiance to the crown - her family - is a strange feeling. Scarlet knows that helping Eleanor will put her and those she loves back in Prince John's sights. Desperate not to risk anyone's life but her own, Scarlet formulates a plan to help save the king on her own. But fate - and her heart - won't allow her to stay away from Nottinghamshire for long. Even if Scarlet and Rob can together stop Prince John from going through with his dark plans for England, will their love be enough to save them once and for all?

What listeners say about Lion Heart

Great way to end the series

I LOVED IT.... this is my favorite series and I love how this last book ended. I would definitely recommend this series to everyone.

I love this book. I have read the actual book version so I thought I would "reread" via Audible. I still love the book and the series, but it was real hard for me to get over the readers style of reading. It was hard because the way she read it was not how I read it in my head. She was very lack luster and seemed to lack a lot of emotion.

I truly loved this story. It had plenty of adventure and the writing was very clever and intriguing. I removed one star due to the sappiness between the heroine and hero, it was a little too much for me. My favorite character actually turned out to be Alan A Dale, he was quite witty and had many turns of phrases that made me chuckle to myself. the narrator/reader did a fantastic job of the 1st and 3rd book (not sure why the 2nd wasn't available on Audible ). If you are going to read this book, invest a little more money into the read version, it is well worth the extra.

The narrator is amazing. I love the different voices and the accents, its the best part. I don't think the story was that exciting, the first one was the best, and i followed it through to the end, but i don't think i got enough out of this one. It's a decent story, but if you're wanting something like the first book, this isn't it.

The first two books in this series were mildly amusing, but I found the narration to be so terrible in this last book that I was uninterested in even finishing it. All the female characters, including the narrator, have deep voices that sound like men. I don't know why the narrator chose to make this stylistic change in the last book in the series, but it was a bad decision and caused me to ask Audible for a refund. The story was not engaging enough for me to care how it ended. I would not waste time or credits on this book.

enjoyed the pulling together of mini storylines from first 2 books but did get a little repetitive and drug out. seems as if author was using a bit extra filler to finish this series. enjoyed the story being told from female Marion perspective

Narrator voice is deeper than book 1 and 2

I loved these books, but I found it difficult to get into when Helen spoke deeper in this last one. Even quite a few men sounded higher than her main female character's voice.

The story was good. I enjoyed the flow. It wasn't as gloomy as the 2nd book.