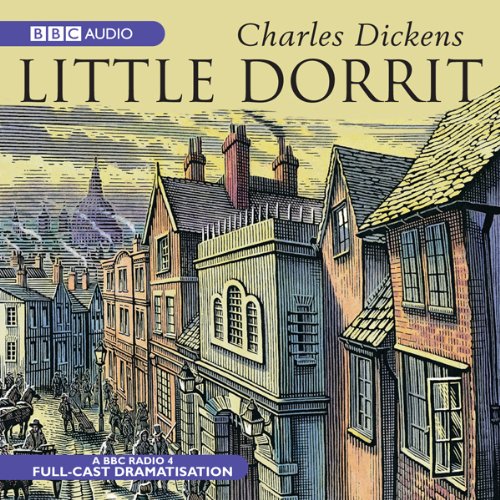 Hailed by George Bernard Shaw as Dicken's "masterpiece among masterpieces" for its social indictment and sense of humanity, Little Dorrit is both an examination of Victorian England and a surprising love story.

This BBC Radio 4 dramatisation recreates the author's mid-19th Century London, in particular the East London area of Marshalsea. Drawing upon his own father's imprisonment in Marshalsea Debtors' Prison, Dickens placed the institution firmly in the heart of the novel when telling the story of Amy Dorrit.

The youngest child of debtor William Dorrit, Amy is born in Marshalsea prison. She and her father are befriended by Arthur Clennam, whose mother employs "little Dorrit" as a seamstress. The fortunes of the Dorrits undergo an extreme change when William inherits a fortune, and the family moves to Italy.

Back in England, Arthur Clennam finds himself the victim of a massive fraud and ends up in Marshalsea. There he is found by Little Dorrit, whose fortune has had no effect on her generosity and humility. Arthur realises that she loves him, but it is not until the Dorrit fortune is lost that the two of them can be united at last.

Peopled with Dickens' usual host of memorable characters, the author's mix of satire and genuine sentiment has made this one of his best-loved works.

BBC full-cast dramatizations are usually a treat, and this one is no exception. If you are interested in experiencing Dickens in a manageable form --- some unabridged readings are in excess of 30 hours long --- this might be a good choice. I enjoyed it very much.

i thoroughly enjoyed this dramatisation. i have already listened to it twice. it captures the essence of the book without getting too wordy or tedious. i am also currently listening ro the unabridged reading of the book.

must have in your library! great book for all ..

To all of Charlie's Dickson fans or who is just starting a collection of great books. what a great audio the characters are great for each dickson's fans you won't be disappointed... a great book for all who like dramatized books.

I love this book, this story. The cart is so wonderful. The acting, the narration, the direction, the music, all are brilliant. A great work of art. Every time I listen to it, I fall in love with it. Kudos! Great production!

Very nice story by great awesome, Charles Dickens
If you are interested in literature please consider Reading this

I enjoyed listening to this dramatised version of Little Dorit, made it easy to visualise the story and the setting. Easy Listening

A very good job was done in terms of script, music and cast! As good as a film!

Little Dorrit is one of those little treasure's a pure piece of professional theatre at the press of a button. Four hours forty mins of pure delight.

We are given Victorian theatre by a full cast who live up to Dickens characters with aplomb. You can feel each one. The story moves along nicely & all is excellent. Narrator to over speak the story as characters
live their roles.

I have all of these Dickens productions in my Collection & each one is a credit in themselves. I doubt we shall have such a wonderful set for a long while. Classic actors in classic Dickens.

This dramatisation is good and it made a change to listen to a abridged drama rather than the full on unabridged version. The sound effects bring the story to life.

This is an abridged dramatisation, with certain characters left out, but still extremely enjoyable.

Not much to say really, I’m sure everyone knows the story. Whoever played Dorrit has a very nice voice and the performance of Mrs Clennam was brilliant!

old fashioned and pedestrian adaptation of a class