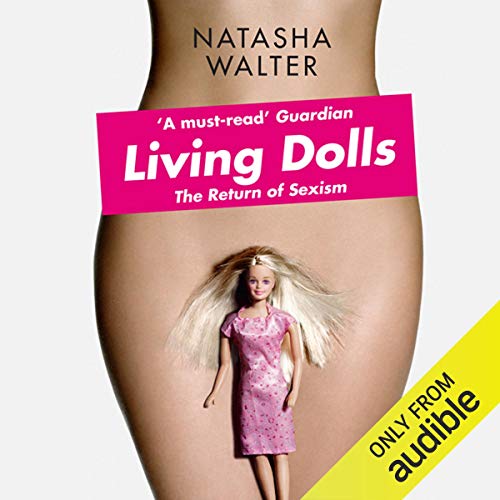 OR
Buy Now for ₹569.00
“This is an important book... Walter has started a discussion that needs to take place not just between women, but between all of us,” Sarah Vine, The Times

Listen to the Guardian’s review of Living Dolls in the Guardian Audio Edition podcast, 7th January 2013

"I once believed that we only had to put in place the conditions for equality for the remnants of old-fashioned sexism in our culture to wither away. I am ready to admit that I was wrong."

Empowerment, liberation, choice. Once the watchwords of feminism, these terms have now been co-opted by a society that sells women an airbrushed, highly sexualised and increasingly narrow vision of femininity. Drawing on a wealth of research and personal interviews, Living Dolls is a straight-talking, passionate, and important book that makes us look afresh at women and girls, at sexism and femininity - today.

Natasha Walter was born in London in 1967. She read English at St John's College, Cambridge University, and then went to Harvard as a graduate student on a Frank Knox Fellowship. Her first job was at Vogue magazine, she subsequently worked as a reviewer, columnist and feature writer at the Independent, the Observer and the Guardian and became a regular broadcaster particularly on BBC2's Newsnight Review and BBC Radio 4's Front Row.She is a passionate advocate for the rights of women and children who seek asylum in the UK , and in 2006 she founded the charity Women for Refugee Women.

What listeners say about Living Dolls

If you're a woman, you need this book. I'm much aware there's misconception growing about what beauty should be. Shamely most of the concepts are installed by advertisements or movies or any kind of digital ntertainment in 21 century. I long this kind of book so I could have reliable source when I come to discussion with my daughter.

Well thought out and researched

the interviews, mixed with data make foe a very compelling 'read' (listen). I learned sooo much from this.

Great composition on many modern issues of real feminism, and it effectively points out the many misconceptions of feminism that men and women hold. It highlights a lot of the age-old negative stereotypes that women and "feminist" women not only believe but actually perpetuate (such as being empowered by pole dancing) - and astoundingly explains their origins and harmful impact on both men and women today. Fantastic, full of sources and scientific studies, and well-written. A must read for any true feminist.

Narrator does nothing for the image of feminism

That towards the end there was a particukar focus on the negative impact of gender stereotypes on men as well as women.

Narrator sounds haughty and puts on 'silly, girly' voices for the women in the book who are glamour girls, strippers, or just not helping themselves in the case for true freedom. A bit disrepectful I felt although possibly accurate.

A male narrator would have been brilliant. Brilliant evidence presented but part of me wonders if it isn't twisted a bit just like those she is criticising - 'we find what we expect'.

This book made me squeal with excitement!

If ever I could write a book of my thoughts and have them read out beautifully, it would be this. I now feel excited and optimistic and not alone about the future of feminism. Brilliant!

Walter’s main thesis is that sexism is a self-fulfilling prophecy and stereotypical gender roles, with all the associated inequality, stem from learnt and reinforced behaviour. She spends most of the book labouring that point from various angles whilst criticising those who favour a more fatalistic or genetic reasoning for gender roles and behaviours. The comes across as a sob story and lacks enough attack to get the revolutionary juices flowing. Dull.

What’s with the accents?

I got 40 minutes in and could listen no longer!
I’m sure that the content of the book has an intelligent argument but why, when the narrator was quoting women in shorts/small tops, was she putting on a girly/cockney voice.
When she was quoting other authors or ‘herself’ (though not read by the author), she was using an intelligent and authorities tone.