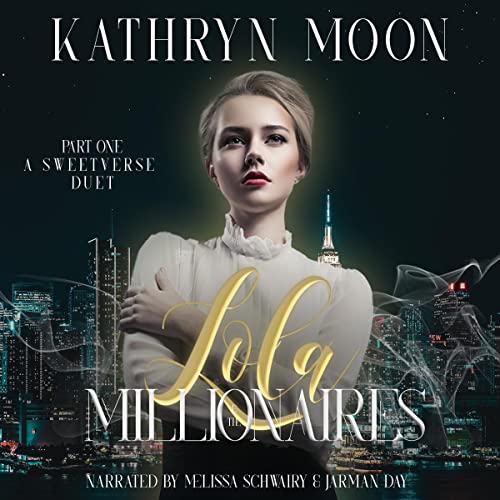 Lola Barnes only wants one thing: to get her life under control. No more chasing alphas who abuse and toss away betas like her. No more hiding in her cousin’s apartment licking wounds that won’t heal. Armed with her dream job and her less than dreamy apartment, Lola is ready to start a new chapter of her life without alphas. But that’s easier said than done when one stumbling incident after another leads Lola closer to an alluring pack of captivating men.

These alphas are everything Lola dreamed of, but they already have an omega - a playful male model who won’t stop flirting with her. And Lola is only a beta, one who comes with deep scars and an unshakeable aversion to alphas and their powerful presences. If only she could resist their perfect beta, Leo, whose patience and determination to see her heal breaks down one wall after another.

When the alpha who all but destroyed Lola tries to start a game of cat and mouse that’s all claws, the safest place for Lola may be the one she’s most terrified of, in the arms of an alpha pack.

What listeners say about Lola & the Millionaires

Holy hot Batman! Aside from some of the best spice I've ever read, the story and character development are superb. The only reason I removed a star is due to the story being two separate books. It doesn't end as a cliffhanger, more like the end of a chapter.

Love Lola and her men

Another great reverse harem book. The characters are amazing and the voice actors did a beautiful job bringing the characters to life. Highly recommend!

This story really threw me for a loop lol. I really enjoyed it and the sexy time scenes were awesome!!

Hours upon hours of sexy goodness. . . . .
Jarman Day, and Melissa Schwairy did a wonderful job.

I enjoyed this book much more than the first. I feel like Lola's story should be 1 book though. Great narrators

One of my favorite omegaverses!

I loved this audiobook version of Lola and the Millionaires! If you have already read the book, this is a great way to revisit a favorite story. If you haven’t yet met Lola and her men, it’s a great introduction to the broken beta who was put back together by a mixed pack of understanding men.

I LOVEd baby & the late night howlers! After hearing about Lola in that book I was so excited. However, I just could not get into it!! Ugh, I think I’m just going to read the second book on kindle unlimited, bc the audiobook was too long and too slow for me ☹️

My Thoughts on Lola & the Millionaires: Part One

I was so excited to start this book after reading Baby and the Howlers. I wanted to check in on Lola. I honestly wanted her to heal and find happiness after everything she’d been through. This story so far did not disappoint. I loved all the differences presented in this book versus the other. How the packs were structured differently. And how Lola fit in and slowly opened up was great to experience. I am so invested in this story from the great writing to the amazing narration. I immediately downloaded part two and am ready to dive in.

Love Lola so much!!

I loved listening to this story, it brought back so many good memories and reminded me again why this author is in my top 10 of all-time. I loved Baby but 100% still agree with my review years ago of the ebook that Lola and her men take the cake. I love their dynamics, how they let Lola get back to herself, they are there for her, they let her grow and recover and show her not all men and alphas are bad. Its amazing to read and now listen. I think for me the only part of the audiobook that I didnt like were the accents both narrators tried to do for Matthieu. He is one of my favorites from the books and the narrators definitely don't do his French accent justice. I just tried to ignore that part. I also thought sometimes they were even off with Caleb's British accent. Besides those (reason I dropped it from a 5 to a 4 stars for the performance) it was done really well. I could imagine these characters in my minds eye and loved every second of it. So glad I grabbed the audiobooks during the big end of summer Audible sale ❤️

Holy moly, I thought Baby was my favorite....Lola takes the cake!

I am not sure how I am going to convey how amazing this 2 part story is. I honestly lost so much sleep, cheated and read some during my work day, and overall didn't want to do anything else but read about Lola and her amazing men and their story. I know I won't do this review justice and I don't want to ruin how magical it is so I will try to keep this brief.

Lola has so many layers, with what she has had to go through, her upbringing, the society they live in, she hasn't recovered mentally and emotionally from her torture that is alluded to in Baby's standalone. She gets a job at her dream company, with the help of her cousin, and she meets some of the guys who will change her life. Funnily enough she already met one of their pack earlier in the book (so much steam in the first like couple chapters, really drew me in!). I loved seeing how fragile Lola was, but how she got stronger with the help of others and really allowing herself to trust in people again. More about that in my review for book 2!

I will say that my ranking of guys tended to switch a lot, like in terms of who was my favorite. I love the small differences in each of the guys. I know I gravitated towards almost all of them throughout the whole series. I think in book 1, Rake, Matt, and Leo stole the show for me in terms of the guys. I mean I was super intrigued by Caleb and Wes and not so much Cyrus, but I think that was just because of his air time so to speak haha.

I loved the alone time she got with the guys but then the group interaction. The pack was adorable with how they are a family. I love the protectiveness and joking around, and how open they are with each other. I thought the storyline was on a great pace, nothing was too quick or drawn out. I mean I have absolutely nothing bad or any critiques to give. I loved every second of book 1 and couldn't wait to get into book 2.

Highly recommend, top 10 favorite RH stories of all time. I already have started a reread because it for some reason grounds me. I don't know how to describe it. Ok, now to write my review for book 2 which somehow is better than book 1! I don't know how Kathryn did it ❤️

Ok, let me start by saying I absolutely adore the story, and I’m glad I walked into it, knowing that it would be a cliffhanger. The characters were compelling, and I do agree that some of the voices at time felt off, especially for Matthew, who didn’t sound quite as french as I would’ve liked. The story follows our main girl Lola, who is dealing with the aftermath of a great trauma. I do want to put a heavy trigger warning for mentions of negative sexual situations, and just generally having PTSDsque flashbacks. Also trigger warning for a lot of negative self talk.

I did enjoy Baby’s story slightly more, but it was more condensed and had a bit more drama. However, this story was a welcome addition to the series. It does read as a bit larger than life as we have a bit of a rags to riches/Cinderella theme going on here. yeah they did a pretty good job of making Lola a compelling character but I feel like she could’ve use a bit more attitude and depth, but to be fair, she is coming off of a great trauma, and it makes sense for her to be a bit more subdued. I am looking forward to seeing Lola grow more as a character and how the relationships in the pack develop. I also have to give a 10 out of 10 for the portrayal of healthy polyamory and queer platonic relationships with some of the other members of the pack. The spice was pretty good, but I really enjoyed the soft moments a lot more than the spice. I thought this book would’ve been enjoying to just read, but audiobooks tend to be more of my style, do you keep in mind that the accents or pronunciations may change occasionally but it’s not so distracting that it made the listen unenjoyable. Overall, I give this book 5 stars just do to the amount of care that was clearly poured into it. I hope that the second book is able to live up to the first one.

I enjoyed this book. It had a good amount of both plot and relationship development which is unusual for a harem-type story. I’ll get more by this author.

Hot, funny and so much love

Really loved this book, main character is witty, smart, interesting and has a dark past. Supporting characters are just as good. How they interact and slowly fall in love made my heart squeeze. And the story is super hot, explicit and steamy in the best of ways.

This one is even better than the first. We got a small glimpse of Lola’s story during Baby’s ordeal and now we get a full picture. Her trauma and all that came after. I love the pack, the different personalities and how all of them support and complement Lola.
Great performances too. On to book 2 now

I have to admit that I knew going into this audiobook that I would love it. I first discovered Lola & the Millionaires, and the rest of the Kathryn Moon and Lana Kole’s Sweet Omegaverse earlier this year, but have re-read the entire series so far at least three times.

Lola & The Millionaires is sweet, a bit steamy, and just so comforting. The heroine is battling her own issues, and has to learn to let the heroes help her along the way. The narration is perfect, and I couldn’t love the story more. I can’t wait for part two to be released in audio! In the mean time, I’ll just re-listen to this over and over again, and fall more and more in love with Lola and her pack. Ultimate comfort book!

Pretty sure I could hear the clothes dryer on in the background in the early chapters.

I liked baby and the howlers but Lola and her millionaires are better. I love them. The men are very very sweet.
Lola has big self hate.
She needs to work on herself, in this book Lola gets three of the six of her men. Hoping she gets the other three in book two.

We hear from baby quite a bit and I love that.
The audio was great and I’m going to listen to book two right now.