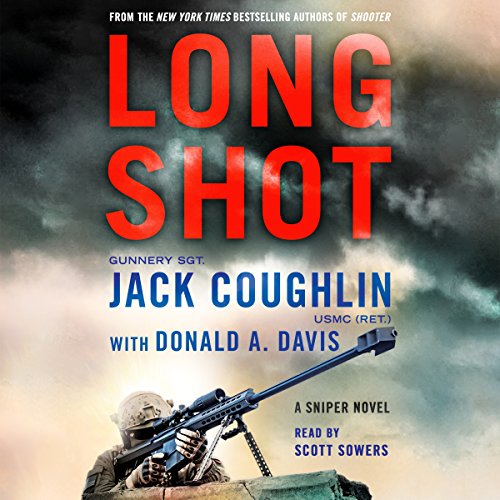 A top Russian intelligence agent has defected to the West, and the only man with whom he will speak is Kyle Swanson, who busted him out of the US Marine Corps Scout/Sniper School years ago. The defector proves to be an Edward Snowden-type gold mine of amazing secrets about the when, where, and how of President Vladimir Pushkin's next grab for lost Soviet territory.

But Swanson, now a special contractor with the CIA, soon begins to believe that it is all fool's gold being sprinkled by Moscow to ignite an open military fight with NATO and the United States. Using his own deadly methods, the sniper sets out to find the truth, but to slow him down the Russians kidnap Swanson's beautiful friend, Calico, the CIA station chief in Estonia.

From Italy to the Arctic Circle, Kyle Swanson is on the hunt, convinced that the defector actually is running a complex plot to hand Russia a kingdom in the north. But Swanson seems always to be a step behind, because there is a traitor within his own chain of command. To stop the madness, Swanson must deliver a kill shot 100 miles away from a border bridge in Estonia, where a Russian army waits on the far shore as a government official crosses over with an invitation to invade.

What listeners say about Long Shot

Narrator killed it for me.

I don't understand why they would switch the narrator. If Daniels was busy doing another book they should have waited. Sowers who was great in The Confession by Grisham, but Kyle Swanson he is not. The story is still great but the narrator switch took away what I had come to love about the series. I don't think I'll suffer through another book if Daniels isn't back. Seems like a totally different series.

Please re-record this with Luke Daniels the proper voice of Kyle Swansonand this series and don't stray from him again.

After 8 novels in this wonderful series with Luke Daniels great narration someone decided to change narrators. What a stupid move! Long Shot is a solid 5 star novel like the others in the Sniper series, but narration, although okay, disappoints. If you like military/espionage thrillers set in current times, this novel and this series are for you.

the narrator ruined this book for me . why did they switch them ?

Should have been a new character

This novel didn’t feel like a Kyle Swanson story to me. Not just because of the new narrator (where was Luke Daniels?), but the character just didn’t seem to me to behave like Kyle Swanson would have. The few characters from previous novels in the series seemed to have been crammed in just to keep the series going. I think the author would have been better served by making this a new series with a new character for this novel.

I would not recommend this book to a friend. I would recommend highly, Book One. After eight books of Luke Daniels bringing Kyle Swanson to life you can tolerate Book Nine and the different narrator. Book Nine narrator sounded like a nerd not a lethal Marine Gunnery Sgt. What happened to Kyle's New England accent? He killed the "Brits". I honestly can't remember much about the Book Nine. The best part was it ended and now I can go to Book Ten with Luke Daniels back.

Did Long Shot inspire you to do anything?

Hope for Luke Daniels to be back in Book Ten or change to a different series.

As many others have said, the narrator is not Kyle Swanson. Storyline was good but narrator missed the mark which detracts from the overall entertainment.

I would recommend this entire series to anyone who enjoys military thrillers. Unlike most other thriller-genre series, you can actually get away with listening to the "Sniper" series out of order: Coughlin and Davis do a good job of filling us in on all the characters and back-story that we need to know. In fact, I would recommend starting with "Long Shot", so you will not experience the narrator-change-in-the-middle-of-the-series shock that everyone is complaining about. Fear not: Scott Sowers does a fine job of narrating "Long Shot". I dare say that, had he been narrating this series from the beginning, few of us would have given him a bad rating. Only, we are comparing him with an impossibly high standard. Sowers does not have quite as nice a voice as Luke Daniels, and he uses a different style and timing than Daniels does, but he still has a wide range of voices and accents at his disposal, and does an excellent job distinguishing all the characters. If other reviewers’ bad ratings are giving you pause, I would suggest that you listen to the five-minute sample that Audible provides here, and see if Sowers’ performance really bothers you. I have no hesitation giving him five stars, while still looking forward to getting Luke Daniels back.

By the way: If the Publisher’s Summary above leads you to believe that our Sniper hero makes a 100-mile shot in "Long Shot", and you are going, "Yeah, sure" … Don’t worry — It is even better than that! Check it out.

Really enjoyed the first several of this series. But this is a bust....hard to adjust to different types...all the fillers...different voices Hard to finish

An ok story but the new narrator kinda ruined it after having Luke Danials read the other 8.

great book, gripping story, could not put it down,now have to follow the rest of the series

After such enjoyable and enthralling previous books in this series, this was a very disappointing finish. The story was boring and the narration by Scott Sowers was absolutely woeful. His portrayal of Kyle Swanson and all characters was atrocious to say the least and it was all I could do to continue listening.
I hope Jack Coughlin's next work is better and I will not be listening to another of Scott Sowers narrations.