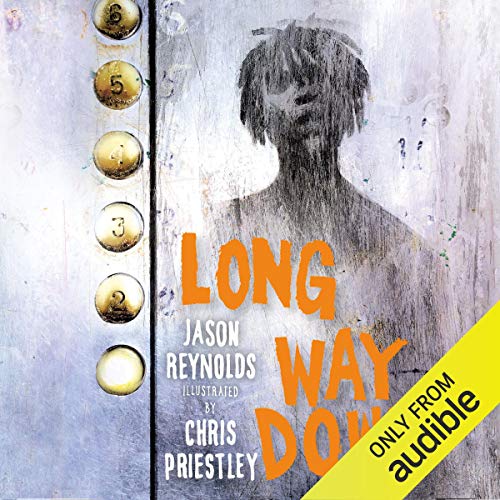 Shortlisted for the CILIP Carnegie Medal 2019

And then there were shots....

Everybody ran, ducked, hid, tucked themselves tight. Pressed our lips to the pavement and prayed the boom, followed by the buzz of a bullet, didn't meet us.

After Will's brother is shot in a gang crime, he knows the next steps. Don't cry. Don't snitch. Get revenge. So he gets in the lift with Shawn's gun, determined to follow The Rules. Only when the lift door opens, Buck walks in, Will's friend who died years ago. And Dani, who was shot years before that.

As more people from his past arrive, Will has to ask himself if he really knows what he's doing. This haunting, lyrical, powerful verse novel will blow you away.

What listeners say about Long Way Down

Such a wonderful read.

The story was so moving, I recommend everyone read this amazing book by Jason Reynolds.

A return to the Top

I didn’t want to get off the elevator but ride it over and over again. I wanted to smell the the stifling smoke and learn more about the trauma the trauma filling the elevator. There was so much thought, so much insight in such a compact amount of time. Every anagram shifted the heart toward a new emotion. To the floor I will return and let the story become gravity.

The Narration Adds So Much

I've already read the paperback, but Reynolds' voice created so much more depth and atmosphere. He became the characters, it was almost like uncovering an entire new layer to the story and especially to the protagonist Will. As he said in the interview, any other interpretation couldn't have possibly captured the intended tone as well.

This should be required reading for every high school reader. For myself, it was a reminder of the white privilege I enjoy everyday.

I do not know any of the authors other works, but this book is from someone who really wants you to believe that the content of the book, really happened, even at the expense of immersion, literally breaking fourth wall several times, swearing that what's happening in the book, really happened, making immersion impossible, cause he literally pushes me out of it, by stating: "This truly happened", and "bear with me on this", instead of just letting the book flow and let it tell its story on its own, without questioning whether the audience believes it or not. The book is told in a manner where it, to me, is unclear whether stuff is just happening in the protagonists mind, and is hallucinating vividly, or that stuff has manifested itself into the physical world. The book builds up a lot of questions for what happens, but it ends before answering any of them, leaving me unfulfilled and to make my own ending to the story. The book builds up for its climax, and literally fails to deliver it. I suppose the book does have a climax, but calling it a climax, is really an offense to the word: "climax." It's like calling a small hill, a mountain. As for the overall performance and general enjoyment of the book, it's not worth much, it could be worse, but should have been far better. The climax of the story, isn't even in the story, it's the untold story that you make up for yourself, cool, right? Stuff that hinders enjoyment for me: One thing is the word: "like" tossed in at random places a couple of times, Along with repeating certain sentences a couple of times in a row, it made it awful to listen to. Yes, I heard you the first two times, literally saying: "I know, I know, I know." Well I'm happy that you yourself, know that you know it, that's really comforting. It's just really strange, and to me, off putting to listen to something like that in a book, unless you are actually quoting someone who talks in such a manner. This was not the case, and in my opinion, should have been filtered out in editing. This is a personal thing and a struggle in general, even if it sort of makes sense in a racist way, for this particular book. The whole "hood" and "gangster" thing, really made it tough to finish, when it's, presumably, written in such a manner. A sentence such as: "I ain't said nothing." To me is saying: "I did not say nothing." e.i. "I said something." However, that's not what is actually meant. What is meant is that he said nothing. Except he used a double negative, which makes it positive, which at least to me, caused unnecessary confusion, since what he is saying is not what is meant. There are a handful or two of these throughout the book. Also had countless issues with pronunciation, and therefor had to read out of context, further forcing me to snap out of the immersion, due to having to actually think of what he is actually saying, rather than outright hearing what is said. E.g.: "war" and "wall", from this particular author, literally sounds the same and having dozen of these type of pronunciation issues, some worse than others (but that's one I can actually remember), throughout the book, didn't help the overall performance and enjoyment of the book. Bottom line: Can't recommend the book. Not even for what it is. The story is too short for its own good, and is not well enough written to enjoy it. Save the credit. In case your credit is worth more than the cost of outright purchasing the book, like it was for me: go out and get a cup of coffee, tea, hot cocoa or something else to your liking, instead of getting this book. Money is better spent. Or getting a treat for your pet, if you should have one, your pet will love you for it! Thank you for reading my wall of text.

This is such a powerful and important story told in an accessible poem performed brilliantly by the author. He freezes a point in time to explore the monumental decision faced by a grieving young boy and does so with humour, pace and lack of judgement. The result is both entertaining and hard-hitting…… as Jason himself describes it, it’s Boyz in the Hood meets A Christmas Carol.

Jason Reynold's words hit like bullets. For a novel in verse, I prefer to hear rather than read, especially if it's the author doing the narration. In a quick hour-and-half, Reynolds has managed to tell the story of a family eaten by violence, believing at each step, that the answer was more violence. I have laughed and cried in the same line. Everyone needs to hear this. Truly, truly great.

Just a brilliant brilliant short novel in verse. It’s full of such pain and sorrow, but also so much love and beauty. Narration perfect. I couldn’t stop listening. Such urgency, such claustrophobic clarity of it, and the shattered fragments of narration. Wow, what a discovery.