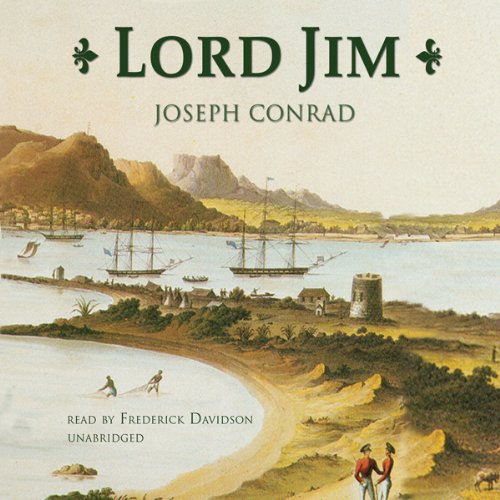 This work set the style for a whole class of literature, a work that the critic Morton Dauwen Zabel calls an example of Conrad's "central theme...the grip of circumstances that enforce self-discovery and its cognate, the discovery of reality and truth...." It is a novel about a man's lifelong efforts to atone for an act of instinctive cowardice. The young Jim, chief mate of the Patna, dreams of being a hero. When the Patna threatens to sink and the cowardly officers decide to save their own skins and escape in the few lifeboats, Jim despises them. But at the last moment, dazed by horror and confusion, he joins them, deserting the passengers - 800 Muslim pilgrims - to apparent death. Tormented by this act of cowardice and desertion, Jim flees to the West. Living among the natives in Patusan, a remote trading post in the jungle, he is able to cease sacrificing himself on the altar of conscience. When he defends Patusan against the evil "Gentleman Brown," his efforts create order and well-being, thereby winning the respect and affection of the people for whom he becomes Tuan - or Lord Jim.
(P)1993 by Blackstone Audiobooks

This is one of my favorite novels of all time; but this narrator is absolutely terrible. The passages in which Conrad's Marlow is clearly supposed to be speaking with a quiet, growling intensity are read by this narrator as if Marlow were a very bored and effete snob. He reads the entire novel this way. I bought this audiobook and couldn't possibly listen to more that ten minutes of it; so I got the Kandinsky reading instead (also available on audible.com), which is infinitely superior.

A book about the sea?

This has been on my book list for some time based on reviews. So finally I listened and read it (that's my system audio and read - a bit compulsive on my part). So the beginning was a little too much hot air, I believe it was because this was originally a series in a magazine, at that time they were getting paid by the word. The symbolism, if there were to be some, was lost on me. So the story continues and it gets better ( you want to keep listening and reading (ha). I did not see the end coming.

Takes an effort to read

Conrad’s books are full of symbolism and, for me at least, are hard to follow. This one is not written in chronological order, and has to be pieced together. It took me a little work to be able to figure this book out, but in the end it was worth the effort. It is beautifully written and I can see why it is ranked among the best literature of the early 20th century (even though it was written in 1899). Jim is the consummate tragic hero. I can’t read too many books like this in close proximity because it leaves me sad and a little depressed.

Frederick Davidson, as alway, is a fabulous narrator. I know some people don’t care for him, but I think he is phenomenal. His characterizations are just great, and the depth of feeling he puts into his reading is really what hooked me on him.

get the other version

I agree with the previous reviewer...although I unfortunately listened to more that ten minutes of the narration. Tried on several occasions over the course of the year and after making it a grueling 9 hrs into the book gave up in despair. For your own psychological well being, do not download this program under any circumstance. Pink toads!...Piiiiiiiink toooooads!...ahhhhh!!!

My father gave me the complete works of Joseph Conrad for my 21st birthday, and over the 30 odd years since then, I must have read Lord Jim 4-5 times as well as listened to it on audio twice. Each time I have got something different from the book. When I was young, I was tremendously attracted to the strange mixture of Lord Jim's intensely romantic and mysterious nature; this last time, I could not help musing about the clash that always seems to occur between a person's inner world and the world we all live in, and the ultimate futility of acts of honour.

All that said, I can well understand that the book would not be everyone's cup of tea - my wife tried reading it a couple of times but gave up! But if you enjoy psychologically intense, analytical novels, you might give this a try - the prose flows so well and Conrad wraps you up in his intensely drawn world with such skill. I am always amazed that english is not his native language.

Lord Jim is particularly suited as an audiobook as much of it consists of Marlowe's own narration of Lord Jim's tale. Frederick Davidson does a superb job; his natural ironic and acerbic style is perfectly suited to to book; his delivery and his judgment of pace, character and mood are perfect.

I loved it and I am sure I will be listening to it again.