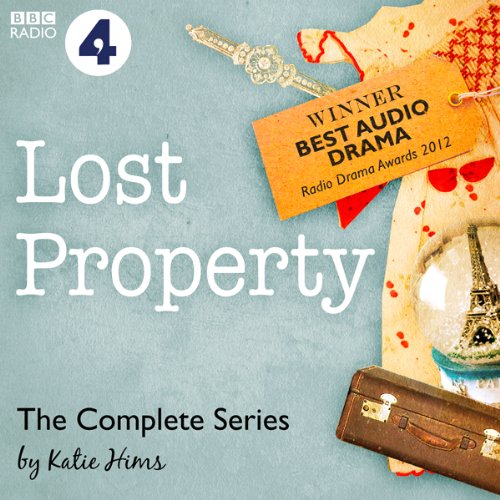 BBC Radio 4's bittersweet trilogy set in 1941, 1979 and 2011. This history of relatives lost and found was originally broadcast on 3, 10 and 17 May 2011 in the 'Afternoon Play' slot. The first play, 'The Wrong Label', is set in London in 1941. Alice knows that to stop your children from being evacuated is tantamount to siding with Hitler. In 'The Year My Mother Went Missing', it's 1979 and not the first time that Ruthie's mother Queenie has gone missing - but usually she leaves a note. The final play, 'A Telegram from the Queen', is set in 2011 and, as Alice's 100th birthday present, Ruthie sets out to put her family back together again. The 'Lost Property' plays star Rosie Cavaliero as the narrator (and later as Ruthie), Shannon Flynn as the younger Ruthie, Alex Tregear, Jane Whittenshaw and Edna Doré as Alice and Gary Beadle as Ted.

What listeners say about Lost Property: The Complete Series

This is a compelling set of three connected stories that span 70 years in the life of a family. The sound effects and performances are really good. I am new to radio dramas and gradually understanding why people enjoy them so much. A fascinating listening experience. So much information is conveyed to the listener in a short amount of time because of careful word choice and really good writing. I can see why it won an award. Recommended if you would like to try something completely different from the BBC.

The best thing I have ever heard on Radio 4

This was the deserved winner of the best radio audio drama in 2012 and it is definitely the best radio drama I have ever heard. Katie Hims is an amazing writer and Rosie Cavaliero voices this perfectly. It is an incredibly moving listen that made me laugh and cry and long for more drama of this quality.

I discovered this series and was hooked instantly. You become embroiled with the characters and they make you smile, sigh and I found myself crying unashamedly at the end. Fantastic drama I would recommend highly.

my husband and i sat waching the sea from the car listening to this story. chapter one finished and we looked at each other and both decided that we just couldent go home we had to keep listening .wot a wonderful story .

Wonderfully brought to life. Best intentions go awry. Love, emanating from family bonds and broken ties resonates consequences across generations of a London family . Beautiful ending as the ribbons that love sends rippling out come together and are resolved.

Loved this book from start to finish. So much so I read it in one day. Story line captivating and we'll written. The plot riveting from war torn London and a lonely frightened mother and her children fighting for survival. The childrens plight trying to survive being swept away by the bungling church authorities. Like many children did during the war. Their survival, longing and fighting to keep each other together. Only to be torn apart by mismanagement. Each chapter links perfectly as time and the years turn over to the present. Each of the children's lives, even when they grow older and into their later years. Never losing hope their wishes and prayers are the family will become together again. Again brilliant book, excellently written and the cast did a great job. Well done