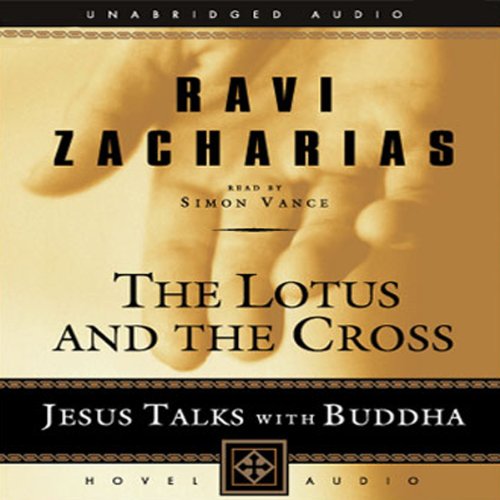 Lotus and the Cross

Have you ever wondered what Jesus would say to Mohammed? Or Buddha? Or Oscar Wilde? Maybe you have a friend who practices another religion or admires a more contemporary figure. Drop in on a conversation between Jesus and some well-known individuals whose search for the meaning of life took them in many directions - and influenced millions.

Popular scholar Ravi Zacharias sets a captivating scene in this first in the intriguing Conversations with Jesus series. Through dialogue between Christ and Gautama Buddha that reveals Jesus' warm, impassioned concern for all people, God's true nature is explored. It's a well-priced version that you will enjoy owning.

This book shows the conversation between Jesus Christ and Buddha, how Jesus listen to Buddha an show him the right way of living. Must listen..!

Ravi does an excellent job of making concise ideas for comparison. His ability to illustrate to communicate ideas is wonderful. This is a book that focuses on a few topics which will lead to more questions, but I think that is great. It's a good story.

What did you love best about Lotus and the Cross?

what a great way to compare!

At the end, what a contrast between Jesus and Buddha

Worship is in the core of human worth.

I loved it! This is like the 3rd time I've listened to this audio book and each time it leaves a sense owe and gratitude to God who chose Dr. Ravi to witness to my spirit and strengthen my faith and commitment to God. And thanks to Vince for such wonderful lecture. Praise be to God, my Father!

It's impressive that an author could capture such imposing figures as Jesus and Buddha so accurately. Not only was this book informative, it was creative and enjoyable. Check it.

Make this into a movie!

What made the experience of listening to Lotus and the Cross the most enjoyable?

The dialogue between Jesus and Buddha was fascinating. The story of the young woman trapped in the life of prostitution was heart wrenching and something I could somewhat relate too. And Visually the idea of Jesus, Buddha and this woman being ferry boated through south east asia and walking through buddhist temples i would simply love to see on a movie screen.

What other book might you compare Lotus and the Cross to and why?

The only things i can compare this to is Zacharias's other Great Conversation books.

Probably when the 4 of them are walking through the temple.

The devastating story of this young woman's life.

I think the only that could have been better was having their action's narrated in 3rd person rather than having the characters themselves say what they were about to do or were doing in 1st person. It sounds really heavy handed and a little cheesy. And when Buddha quoted a common phrase from Ravi Zacharias himself i was like "What? Would Buddha really say that?" Fortunately these things only happened a few times and not enough to ruin the book.

Ravi's book is written from the Christian viewpoint and the comparisons to Buddhism are certainly provocative. Knowing little about Buddhism, I found myself reading externally to learn more. That said, the story is compelling and the reader, Simon Vance, does an excellent job. I recommend this book.

Value found in the Conclusions or Jesus?

I think Ravi does a fantastic job of exposing the heart, the nature, the essence, of our triune God; revealing the love of the father and our hope found in Jesus. While this was a good exposé of the differences between the teachings of Buddha and Buddhism and the gospel of Jesus Christ, I think that the real value is revealed as Jesus exposes the relationship we have been welcomed into with the Father, the Son, and the Holy Spirit

I was looking for something that addressed the differences between Christianity and Buddhism. This book mocks Buddhism and promotes Christianity. It was not what I was looking for but I listened in hopes of hearing something useful. It was just more of the same emotional recitation of Bible verse that I grew up listening to. If you want a feel good story about Christianity, try it BUT if you are looking for intelligent discussion on world religions, don't waste your time.

I think that this would be a great witnessing tool and conversation starter. Ravi has done an excellent job AGAIN!

Ravi did a masterful job of contrasting Jesus and The Buddha. Many blur the two views. But at their core the teachings are vastly different.

The ultimate hopelessness of Buddhism expressed in the simple, poignant story of a Thai girl driven to prostitutution by the people and circumstances around her. As she's riddled with AIDS, Buddha can only comment that she brought it all upon herself, and now she has to spend an eternity paying off the karma she created with her actions in this life. And even if she succeeded in this impossible task and paid off her karmic debt for her life as a prostitute (a life which was not even her free choice, because it was practically forced on her) what about the new karma accumulated in the journey of however many more births to cancel off her current karma? For such is the pitiless heart of Buddhist doctrine. How could the Buddha ever feel compassion for someone, anyone, when that compassion would be an attachment of his heart to that person...ergo, by definition a negation of his blissful detachment in nirvana?
Buddhists are wonderful, admirable people committed to virtue and discipline. But they have set off on a path with no possible hope of an end. Karma is a debt that will never be paid off; it has to be written off. And only God can do such a thing. Karma (sin) is as cosmic debt that could only be erased by someone above and beyond the cosmos. God is the only one who can deal with such a cosmic force as a gift of His love and compassion. We will never be able to earn it. And this is why the Christian message makes more sense than all alternatives.

First of all, this is read very nicely by Simon Vance (one of my favourite readers of audiobooks).

I was expecting a stimulating and balanced discussion between two of the most famous people in history who have a continuing influence on the World today. However, the Christ presented here is pompous, arrogant and self-righteous. He spends the whole book attacking Shakyamuni Buddha and Buddhism. Christ never mentions antinomianism - a major failing of Christianity.

The author is clearly a Christian and clearly does not understand or respect Buddhism. However, I would recommend this audiobook to anybody because it is thought provoking if flawed and irritating at times.

Loved it. will recommmend to families and friends especially to christians and buddhists searching for the Truth