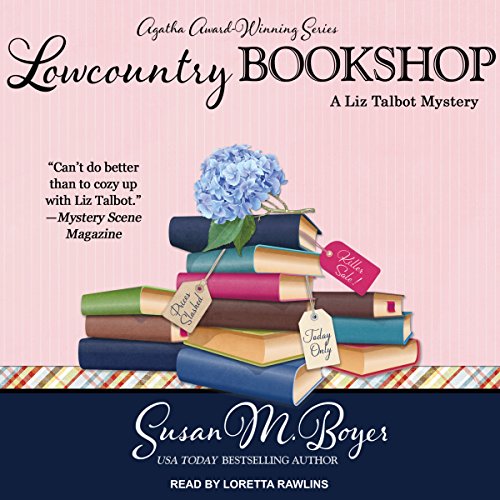 Between an epic downpour and a King Tide, the historic streets of Charleston are flooded - and dangerous. A late night tragic accident along the Lower Battery leads Liz Talbot straight to her next case. Who's the client? Well, now, therein lies the first puzzle.

When the police arrive at the scene of the accident, Poppy Oliver claims she's only trying to help. But the dent on the front of her Subaru and the victim's injuries provoke a certain Charleston police detective's suspicious nature.

A wealthy, anonymous benefactor hires Liz and her partner Nate Andrews to prove Poppy Oliver's innocence. What exactly was Poppy Oliver up to? Is she a random good Samaritan who happens upon the accident scene? Or perhaps this tragedy wasn't an accident. She just might be his abused wife's accomplice.

From a risque, exclusive club in an old plantation to an upscale resale shop in the historic King Street shopping district to a downtown graveyard crawling with ghosts, Liz tracks a group of women who band together to help victims of domestic violence. In her most challenging case yet, Liz fears she may find a killer, but justice may prove elusive.

3 and a half stars

Mystery fans will appreciate the twists and turns in Lowcountry Bookshop. Ms. Boyer put together the pieces of this mystery in a way that I did not foresee. I had considered at least four different scenarios and had not even thought of the ultimate twist! I live in the greater Charleton area and I am always impressed by Ms. Boyer's attention to detail. If you have travelled to Charleston, SC, you may recognize some of the venues mentioned. If you have never been to the Holy City, please take note of restaurants, theaters, churches and historic sites and put them on your bucket list!

LOVE LIZ, NATE, AND THE REST OF THIS CAST

MY ONLY REGRET IS HAVING TO WAIT FOR THE NEXT BOOK. I BINGE LISTENED TO THIS SERIES AND THOROUGHLY ENJOYED EACH AND EVERY BOOK. I CANNOT WAIT TO SEE WHERE LIZ, NATE, AND THE CREW END UP NEXT.

Never fails. Another absolutely delightful read. Highly recommended series. I know that I will be sad to see the last.

Waiting for the next one

I absolutely love this series, the characters are fun and easy to relate to. Hopefully there will be more soon.

My Personal Favorite of the Series

Another fun and light Liz Talbot Mystery but with a serious background topic of domestic abuse. Since I live in Mount Pleasant, SC, I thoroughly enjoyed the references to actual restaurants/places in the area. I could also see how giving women in the area could provide support to others in need. Excellent read.

I have binge listen to this series it is been good from the first paragraph to the last !

love the characters in this series...lol. I know people that cod have bee the inspiration!

Love this book, and this series!

Another great adventure in the low country with Liz Talbot, her ghostly BFF, and her hot husband Nate. My only problem with Susan M. Boyer's series is that she doesn't write faster! Can't wait for the next installment.

Never a dull moment #alwayskeepsmeguessing. Love this author, this book and the series. Narrator does a wonderful drive. #MysteryDoneRight. #tagsgiving #sweepstakes