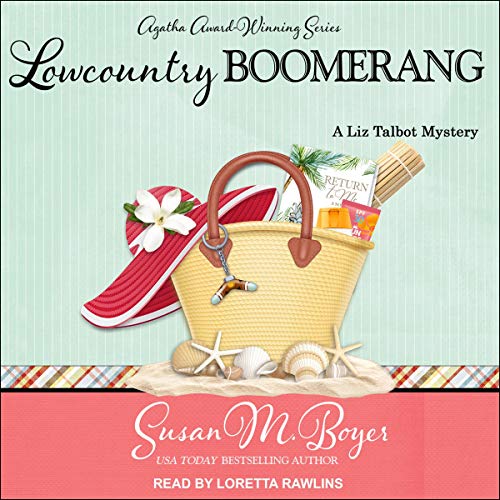 Private investigators Liz Talbot and Nate Andrews are all set to enjoy some quality time on the beach. That's until they get the news about Darius. Darius DeAndre Baker, star of the hit TV show, Main Street USA, has had enough of the Hollywood high life. After 10 years of visiting everyone else's hometown, he returns to his own - Stella Maris, South Carolina.

But the moving trucks have barely unloaded when Trina Lynn Causby, Darius's high school girlfriend, turns up dead, and the entire town reels as Darius is arrested.

Despite the mounting evidence against him, Liz and Nate believe Darius is innocent. They dig through a scandalously long list of suspects, including Darius's three ex-wives - who have all arrived in Stella Maris - and his love child with Trina Lynn.

But Trina Lynn led a complicated life. She had at least one stalker and two suitors - one with a jealous wife who recently made a deliciously outrageous scene when Trina Lynn turned up at a charity ball.

As the danger mounts, Liz and Nate race to find a killer and clear Darius's name - and keep him alive.

I have listened to all titles in the Liz Talbot Mystery series. I can't get enough of Liz and the antics of the cast of characters. My favorite is Chumly the Basset Hound. As a native Charlestonian, the one thing that gets me, is the mispronunciation of the Charleston names.

Aside from that, I highly reccommed the Liz Talbot Mysteries.

Susan doesn't disappoint! I love me some Liz and Family. I can't wait for the next.

we drive dog rescue transport and are driving for 24 hours non-stop. This is one of the series we enjoy every time -- this one not withstanding. The narration flows more evenly in this book than past books (no pause between "Said" and [whatever the character said]) and Liz & Nate are hands-down a kick-@$$ detectives. There are enough twists so that the bad guy is not obvious, but not so much so that you're saying "how did that happen?" Can't wait for the next episode

Another home run for Boyer!

I had been patiently waiting for the new Lowcountry book to come out, and it didn't disappoint. It had me guessing to the end who the killer was. And I loved catching up with Liz, Nate and their quirky group of friends and family. Boyer is a master of painting a story with details, but no so much that it's distracting. And Loretta Rawlins is perfect as usual. Will be waiting patiently for the next in the series!

Excellent! May be my favorite book in the series.

Cannot wait for the next book. This book kept me guessing until the end. The narrator nails all of the personalities.

This is another enjoyable book in the Liz Talbot series. Each book is filled with delightful characters and and interesting plot. I always look forward to the next book.