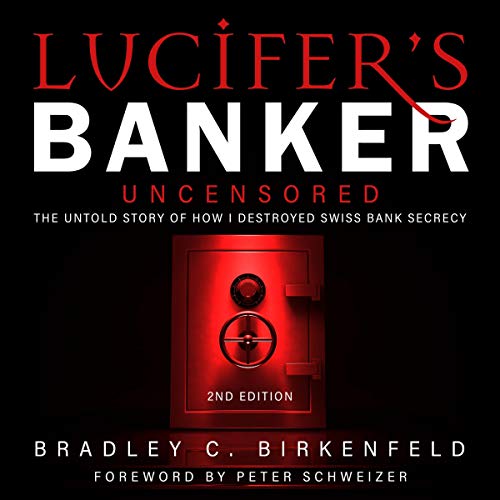 As a private banker working for the largest bank in the world, UBS, Bradley Birkenfeld was an expert in Switzerland's shell-game of offshore companies and secret numbered accounts. He wined and dined ultrawealthy clients whose millions of dollars were hidden away from business partners, spouses, and tax authorities. As his client list grew, Birkenfeld lived a life of money, fast cars, and beautiful women, but when he discovered that UBS was planning to betray him, he blew the whistle to the US government.

The Department of Justice scorned Birkenfeld's unprecedented whistle-blowing and attempted to silence him with a conspiracy charge. Yet Birkenfeld would not be intimidated. He took his secrets to the US Senate, the Securities and Exchange Commission, and the Internal Revenue Service, where he prevailed. His bombshell revelations helped the US Treasury recover over $15 billion (and counting) in back taxes, fines, and penalties from American tax cheats. But Birkenfeld was shocked to discover that at the same time he was cooperating with the US government, the Department of Justice was still doggedly pursuing him. He was arrested and served 30 months in federal prison. When he emerged, the Internal Revenue Service gave him a whistle-blower award for $104 million, the largest such reward in history.

An excellent story about how dysfunctional / corrupt our government is. Well worth the read, think about how you vote, not that it really matters, they all seem the same

If you watch OAN you will love this book. I couldn't make it past the prologue.

The title is,in no way designed to demean the story but to express the enthusiasm with which I donned my earphones for my dog walks. The story is excellently written and delivered with feeling and pace. I have already recommended this to a number of my friends.

One of the best.

Without doubt one of the best books I have listened to. Reads like a triller and scares the life out of you because it is fact.

The oration was first class

Whatever about Bradley’s Hammer inc he has a career in writing.

What a waste of time!

I Listened in the hope that this totally self absorbed writer would redeem himself. It did not happen. Sadly the hours spent listening to this are non refundable.This lacked any connection between author and listener. You win some, you lose some.