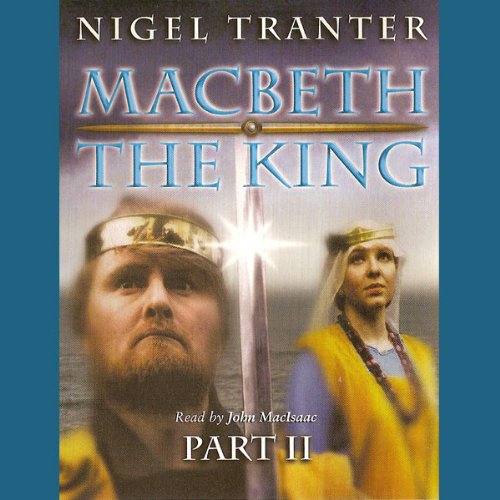 Nigel Tranter introduces his tremendous novel of the true Macbeth and his struggle to make and save a united Scotland, of his devotion to the greatly-wronged young woman, Gruoch, of the humane laws they sought to establish, the battle he was forced to fight against Malcolm Canmore, the ancient Celtic Church he supported against the threat of Rome, and the price he paid.
©1978 Nigel Tranter (P)1998 Novelsound

Macbeth is one of Shakespeare's most famous plays

Macbeth is one of Shakespeare's most famous plays, and is also called The Scottish play. This is very popular audio book of Shakespeare. It Comprised of five acts, it starts by predicting tragedy, as three witches agree to meet up again after a battle is fought (setting the context for the play). Rich in imagery and with the idea prevalent that the state of nature affects the state of the world, there is thunder, lightning, doom and gloom. Macbeth is told to be wary of Macduff and therefore decides he needs to be killed. An army is gathered by Malcolm and Macduff to defeat Macbeth. Meanwhile, Lady Macbeth has gone totally mad, consumed with guilt from her evil deeds and plotting. She dies, but Macbeth is not moved by the news. Finally, the great battle starts and Macbeth is ultimately killed by Macduff. Malcolm becomes king, and order is restored. Good wins, and evil, corruption and human greed are slain. More has been written about the Shakespeare plays than practically has been written about all other books in total... so all that remains to be said is that this play really is recommended. It is easy to listen to and accessible, and identifies with timeless themes - the corrupting nature of power and greed, and the terrible affects this can have. An absorbing listen. . This review is of the audio version, Narrated by John MacIsaac . The author's inflection adds drama to the plot, and additional sound effects help set the tone for the story. For example and the accompanying audio includes such ambient sounds as the crackling of branches underfoot and the fast breath of a frantic youth. Throughout his reading of the story, John MacIsaac alters his voice so that readers will come to recognize the different speech patterns and accents of its characters. Audio book is having three parts and available in three volume. The length of story of this audio book is two hours and forty five minutes.