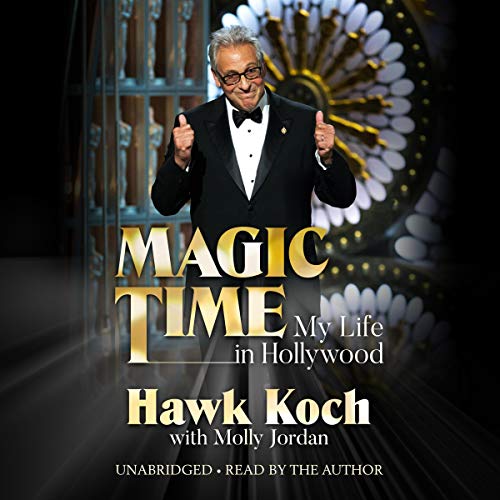 Hawk Koch is a renowned film producer who has served as president of the Academy of Motion Picture Arts and Sciences. He has produced some of the most iconic films of all time, including The Way We Were, Chinatown, Heaven Can Wait, Gorky Park, and Wayne’s World, among many others. He was born into the business, the son of legendary Howard W. Koch, who ran Frank Sinatra’s production company, was head of Paramount Studios, and was president of the Academy. Growing up, Hawk was dealt an immense amount of privilege and was met with the challenge of living up to his father’s name. Howard wasn’t communicative with his children, which left Hawk a sizable hole in the experience of who he was.

Just shy of his 50th birthday, Hawk realized that he was depressed, a mess, and unfulfilled. Following the advice of a friend, Hawk visited a rabbi. “Who are you?” the rabbi asked. Driving home, Hawk realized he was about to find out. Hawk was finally able to confront his inner demons and reevaluate his life, and he was bar mitzvah-ed for the first time.

Magic Time: My Life in Hollywood is the story of a father and a son and the lasting impact that that relationship carries, against the backdrop of the glitz and glamour of Hollywood.

Hawk Koch's honest, sometimes raw, often funny, ultimately fascinating audiobook provides a glimpse inside pre-digital Hollywood and an answer to the age-old question, what the hell does a movie producer actually do? Born Howard Koch Jr., he was "burdened" with being the son of one of the greatest movie producer/exec's for decades, but he was still drawn to do what his dad did, and become a producer. However, at age 50, he also renewed his Jewishness, had a bar mitzvah and changed his name to Hawk. It is worth a listen just to hear how he chose his new name. As this book reveals, he paid his dues to climb the industry ladder, working his way up from starstruck kid an AD to producing some really great movies. His insights into Chinatown and (recently deceased) Bob Evans, add to the history of the era, offering a very different view of the colorful, controversial one-time Paramount chief, and all of the Hollywood greats he met and worked with. If you are in show biz or wish you were, this is well worth a listen.

If you have ever wondered what life is like for a Producer or Assistant Director at the top of his game, listen to or read this book.

I have to admit, Magic Time moved me. It moved me because it's the story of a man who loves movies as much as I do and it's told with great care and love. It's hardly the usual Hollywood memoir. This is a man who helped make great movies, many wouldn't have been made without him, and he never loses his humility and self-deprecating humor and he never loses sight of the fact that the story is the most important thing. Lovely book.

Not your vapid HOLLYWOOD tell-all book.

Highly recommended, well written and honest. Fascinating history of growing up in Hollywood and working hard to succeed and thrive.
Terrific cast of movie stars and industry colleagues that Mr Koch has worked with and the experiences that they afforded.
These encounters are so vivid and elucidating and well edited that you wish there were more.
Mr Koch narrates beautifully.
I have listened to hundreds of Audible presentations, this is a winner!