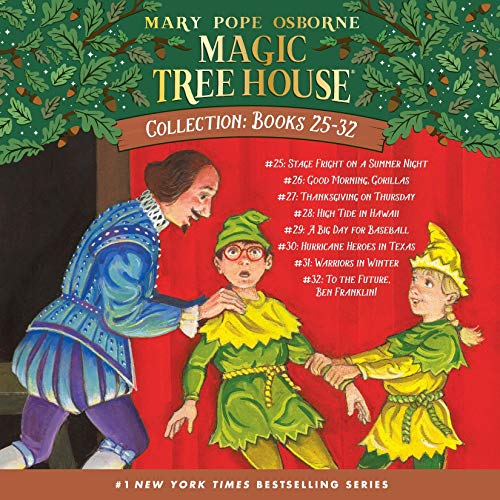 #25: Stage Fright on a Summer Night

The show must go on! That's what Jack and Annie learn when the Magic Tree House whisks them back to Elizabethan England. There they meet William Shakespeare himself - one of the greatest writers of all time! But Mr. Shakespeare's having a hard time with some of the actors in his latest show. Are Jack and Annie ready to make a big entrance? Or will it be curtains for Shakespeare?

Gentle giants or giant monsters? That's the question Jack and Annie have about gorillas when the Magic Tree House sweeps them to the mountains of Africa. There they meet a group of amazing and sometimes frightening mountain gorillas. Annie knows how to play with the creatures right away. But Jack is left out. Will the gorillas be able to teach him some special magic?

It's a time for giving thanks when the Magic Tree House whisks Jack and Annie back to 1621 on the first Thanksgiving Day. The Pilgrims ask them to help get things ready. But whether it's cooking or clamming, Jack and Annie don't know how to do anything the Pilgrim way. Will they ruin the holiday forever? Or will the feast go on?

Catch the wave! That's what Jack and Annie do when the Magic Tree House whisks them back to a Hawaiian island of long ago. They learn how to surf and have a great time - until strange things start happening. Jack and Annie soon discover the cause: A tidal wave is headed their way! Can they help save their new friends in time?

Play ball! Jack and Annie aren’t great baseball players...yet! Then Morgan the librarian gives them magical baseball caps that will make them experts. They just need to wear the caps to a special ballgame in Brooklyn, New York. The magic tree house whisks them back to 1947! When they arrive, Jack and Annie find out that they will be batboys in the game - not ballplayers. What exactly does Morgan want them to learn? And what’s so special about this game? They only have nine innings to find out!

Jack and Annie are on a mission! When the magic tree house whisks them back to Galveston, Texas, in 1900, they find out that a big storm is coming. But even though there is rain and wind, no one believes there is any danger. As the storm grows, seawater floods the city. Now everyone needs help! Jack and Annie have a little bit of magic and a lot of hope - but will it be enough?

We are warriors! Jack and Annie have met knights, pirates, ninjas, and Vikings, but they have never met the most fearsome warriors of all: Roman soldiers. When the magic tree house whisks them back to the early 100s AD, Jack and Annie find themselves in a Roman camp. Their mission: Be like a warrior. That is easier said than done! The Roman soldiers are much scarier in person - and suspicious of strangers. Then a mysterious man riding a black horse gives Jack and Annie some advice to help them on their mission. But the man may not be who he seems. Will Jack and Annie be good warriors? Can they learn what makes the Roman soldiers so great? And who is the mysterious rider?

Jack and Annie know all about Ben Franklin. He was a Founding Father, a journalist, and a famous inventor! When the magic tree house whisks them back to meet the man himself, they're not sure what their mission is. But Ben Franklin has a mission of his own. Intrigued by Jack and Annie, he's curious to learn more about where they came from. And very curious about their tree house....

My kids have been anxiously waiting for the release of this collection, but it’s disappointing to see that the books do not match what is listed on the cover. Hopefully the editors will fix it soon.

Bought this for my five-year-old but four of the eight books don't match what is listed (and are duplicates of ones we already own). Returned it for this reason; would re-purchase once this issue is fixed.

I love Mary Pope Osborne's books so much. But in this collection, books #29 ~ #32 missed, instead, it includes 4 books from Merlin Missions. Editor, please fix it ASAP. Thank you.

Ditto on all of the following reviews. My daughter was eagerly awaiting these stories only to find that half of them (after #28 High Tide in Hawaii) were Merlin Mission stories that she already owned. Love the stories, love Mary Pope Osbornes narration. Please fix this Audible so she can hear the rest of them.

We love these books but unfortunately half of the stories do not match what is listed. Very disappointing.

Not the titles it claims to have

I don't know who messed up, but this is not numbers 25-31 of the original Magic Treehouse series that the description promises. You get numbers 25-28 as promised, but instead of #29-33 you get Christmas in Camelot, Haunted Castle at Hallows Eve, Summer of the Sea Serpent and Winter of the Ice Wizard, which are actually the first four books of the Merlin Mission series. Unfortunately we already have those books so these are duplicates for us. My daughter was really excited to hear new stories she hasn't heard before, but instead it's something she already has. Buyer Beware!

Recording is not complete - has older fillers

7-9yr olds disappointed at all the waiting for this collection. ☹️ why advertise, if they are not going to deliver.

We bought this for the books listens but instead it has different books which we already own. Huge let down!

Half of the collection is not as advertised

The last couple of chapters were not what was stated on the cover. They were stories from a previous collection. So my children had already listened to half of this collection previously. This mistake should be corrected.

I have emailed audible on this 2 times now and nothing has been done about this except "delete it and reinstall it." If you play it online, it is still wrong audio. People at audible are not doing this right. I wish they would fix their errors and make this collection the correct audio.

My 6yo was SO happy that this collection was finally released, as I can’t afford to buy each book separately... these book collections have been a welcome companion during lockdown. Very disappointing to discover, however, that the last four books are missing and instead have been replaced with the first four Merlin Mission books :(