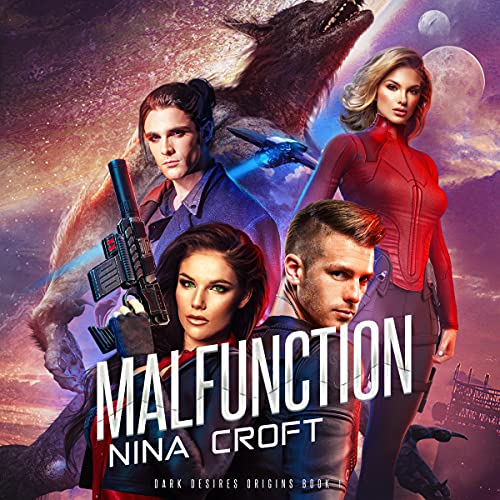 Investigator Sergeant Logan Farrell has never been convinced the human race deserves saving. But it looks like he’s got the job anyway.

It’s been 500 years since we fled the remnants of a dying Earth in search of a new home. Twenty-four ships, each carrying 10,000 Chosen Ones. All sleeping peacefully...until people start dying in cryo.

Malfunction or murder? Hopefully, the former - a serial killer in the fleet would be drastic for morale. But Logan is determined to find the truth. Unfortunately, he’s got a new partner - and he works best alone.

Katia Mendoza, hot-shot homicide detective, has been woken from cryo to assist with the investigation. But is she really interested in solving the case, or does she have her own agenda?

Before he can answer that question, though, they become targets themselves.

Nothing like a few near misses with death to bring a couple together, and Logan finds himself falling for the alluring detective. But he doesn’t know that Katia is hiding a secret.

It’s not only humans who fled the dying Earth.

What listeners say about Malfunction

Story:
This is a mashup of several genres I love. It’s space opera told through a detective mystery and a paranormal romance. The basic idea of were-animals, vampires, Fae, and demons escaping extinction as stowaways on Earth’s ark-like vessels was pretty cool. The paranormal elements don’t really enter the field until the midway point, however, and there are only a handful of paranormals with more than a cameo appearance. Backstories, setting, science or paranormal explanations are few and far between, keeping things more on the shallow end. The mystery was also rather predictable.

I feel like this might have played better leaning further into gritty detective noir or space camp. As-is, this was closer to camp, but not nearly as, well, campy as it could have been. There are some chuckle worthy scenarios and you’ll have to roll with the character’s Star Wars and Wonder Woman references (odd that, a half millennia after leaving Earth the characters would still bandy about such pop culture references). The violence is very comic-level sanitary, described without a blood and gore obsession. There are occasional F 💣 and frequent exclamations of “balls!” I found the former largely unnecessary (does he really need to refer to “space, the final Fing frontier” or say “frankly, my darling, I don’t give a F”?) and the latter to be a fun recurring gag as the scenarios leading Logan to utter his catch-phrase get increasingly absurd. The 3-4 nooky scenes were more than fade to black but less than you’d get in a typical paranormal romance book- definitely more YA level.

Characters:
The three main characters, Logan, Katia, and Rico were engaging. I got a kick out of a centuries’ old vampire with a ruthless streak and a man-bun. I appreciate the racial diversity and representation of strong women, from MC Katia to a female captain cameo and a recurring science officer. I wish the supporting characters were better fleshed out and I wish there were more of them.

Narration:
I think I might have upped the star rating for the story with a different narrator. The narration cadence was slightly robotic and, especially in the second half, the recording was choppy, with one sentence voiced close to the mic and the next sentence sounding like it was coming from across the room.

Verdict:
Not bad for what appears to be a debut book. I appreciate the $4 for 9 hrs price tag. This was fun enough escapism that I’ll move on to book 2, which is still offered for less than a credit.

Similar books, depending which genre you skew towards:
🚀This Long Vigil (novella, harder sci-fi take on the interstellar-ark plot, currently free in Audible Plus)
🚀Titanborn (space detective on the grittier end and phenomenal narrator RCBray)
🚀Space Team omnibus (maximum camp and a valley-girl werewolf)
🚀Hunt the Stars (better blend of space opera action, paranormal, and romance)

While I liked the main characters, the plot was so full of holes as to be completely ridiculous. The heroine had been a homicide detective, but apparently didn't both using her brain to put together really obvious clues. For most of the book, the hero was too busy navel gazing to investigate. And those are only a couple of the problems. I knew who the villain was very early, just not the reason for the crimes. The book didn't get better, and science was really fantasy. Shooting bullets on a small shuttle in space? Just one example of the stupid actions that occurred. And what was the deal with the constant whiskey drinking?

The narrator was okay, but sometimes mixed up voices or didn't differentiate them well. There were a couple of places where it sounded like a few words had been inserted after the fact as the voices were suddenly different.

This was a different kind of romance. It is a solid four star book. The story was mixed with humor and was entertaining. It has action to it and of course steam. I was somewhat disappointment with the narration. It was not as good as some other books that I’ve listened to. Once I got used to the narration I enjoyed it even more. It was definitely worth the credit I used to purchase the book. I would read/listen to another story from this author.

I really enjoyed this book, it had a little bit of everything; there was sci-fi, fantasy, romance and best of all mystery. The mystery kept me guessing right up to the point where the main characters finally began solving it. Catia and Logan were imperfect and likable. The supporting characters enriched the story. There was some erotica but not like some books that get excessive. I wasn’t too sure about Mr. Salzman‘s performance at first. I couldn’t explain why. I think it came across as though he was making announcements. But as I got further and further into the story I really began to enjoy the performance as well.