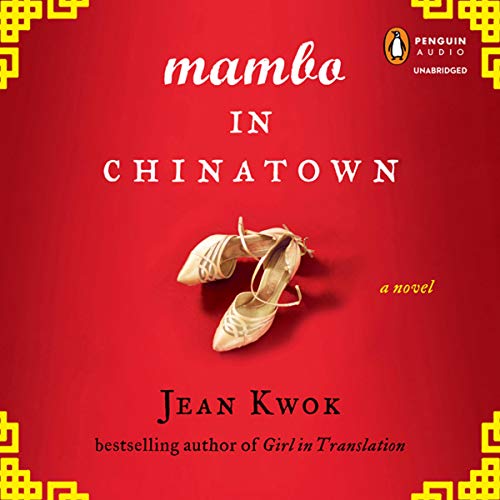 From the best-selling author of Girl in Translation, a novel about a young woman torn between her family duties in Chinatown and her escape into the world of ballroom dancing.

Twenty-two-year-old Charlie Wong grew up in New York's Chinatown, the older daughter of a Beijing ballerina and a noodle maker. Though an ABC (America-born Chinese), Charlie's entire world has been limited to this small area. Now grown, she lives in the same tiny apartment with her widower father and her 11-year-old sister, and works - miserably - as a dishwasher.

But when she lands a job as a receptionist at a ballroom dance studio, Charlie gains access to a world she hardly knew existed, and everything she once took to be certain turns upside down. Gradually, at the dance studio, awkward Charlie's natural talents begin to emerge. With them, her perspective, expectations, and sense of self are transformed - something she must take great pains to hide from her father and his suspicion of all things Western. As Charlie blossoms, though, her sister becomes chronically ill. As Pa insists on treating his ailing child exclusively with Eastern practices to no avail, Charlie is forced to try to reconcile her two selves and her two worlds - Eastern and Western, old world and new - to rescue her little sister without sacrificing her newfound confidence and identity.

What listeners say about Mambo in Chinatown

Quick steps into your heart

This is a wonderful book. It's a light read yet covers some big themes and handles these with deft footwork. I enjoyed the insight into the immigrant life and how difficult it can be, especially for the children of parents still tied to the old ways. Our heroine has great character and we are for her every inch of the way. It's a very satisfying and rewarding read and a special mention for the narrator, Angela Lin. Great job.

Loved the inside view of two different worlds

What did you love best about Mambo in Chinatown?

A couple of years ago I became an avid amateur ballroom dancer and at the same time I have parents that immigrated from China. This was an accurate journey into both worlds. The characters were very realistic to me. I love ballroom dancing and in many ways, this book's insider descriptions of this world helps me to articulate why. Also, the clash of cultures is one that I can totally relate to and I felt myself cheering on the main character Charlie to successfully navigate between them.

Angela Lin is one of the best narrators I have heard. She has the amazing ability to credibly bring several very different characters and their personalities to life.

If you could sum up Mambo in Chinatown in three words, what would they be?

If I could only use 3 words to sum up Mambo in Chinatown they would be; Tearjerking, Magical, and Moving.

I loved the depth of Lisa's character and her relationship with her older sister, Charlie, as well.
Likewise, I like Charlie and her ambitious nature and East meets West philosophy.

Have you listened to any of Angela Lin’s other performances before? How does this one compare?

No, I have not listened to any of Angela Lin's other performances but I plan to now. I can't compare to anything but I will say she did the different voices and personalities so well. It made the characters come to life for me and as a result Mambo in Chinatown flew by quickly!

If you could take any character from Mambo in Chinatown out to dinner, who would it be and why?

I would take Charlie or Lisa out to dinner. I can't decide between the two but I saw deep well rounded characters in both of them and would want to get to know them better.

Mambo in Chinatown is such a great listen! I had the option to read the large print copy from the library but I chose the audio version instead and am very glad I did. The audio version was fantastic and I recommend it to anyone who wants a good book to read. Happy listening!

The story is nice but reads like a cable TV romance. The narrator's voice is beautiful, but her accents are off; for example, her Hispanic accent sounds Russian, so it's distracting.

This book is an implausible collection of stereotypes, oxymorons, and anachronisms lightly wrapped in a superficial and predictable plot.

I really enjoy Jean Kwok, especially loved her first book, Girl in Translation. This second book was equally good but I preferred the narrator from the first book. The story at time got a little slow, but overall I enjoyed it

I found this book to be something of a mixed bag. There were some sweet moments, and the cultural backdrop was interesting, but overall lacks the element of surprise. An average read.

Sweet story, an insight into two cultures Chinese and ballroom dance. It was an enjoyable book.

Kwok offers us a view into the lives of Chinese immigrants and Chinese Americans living in Chinatown. She makes her tales palatable, and we learn. The narrator is tremendous- too bad the production all too often does not supply the transition that it should, when there are temporal breaks in the story, by allowing sufficient silence.

Would you try another book from Jean Kwok and/or Angela Lin?

Has Mambo in Chinatown turned you off from other books in this genre?

No, although I cannot define the genre - beach literature?

The narrator was decent, but sounded a bit whiney at times.

The story was predictable, and overly long. Perhaps it would appeal more to Chinese Americans who can personally relate to some experiences, but even they may find it very cliche. I finished it, but only because I was bored.