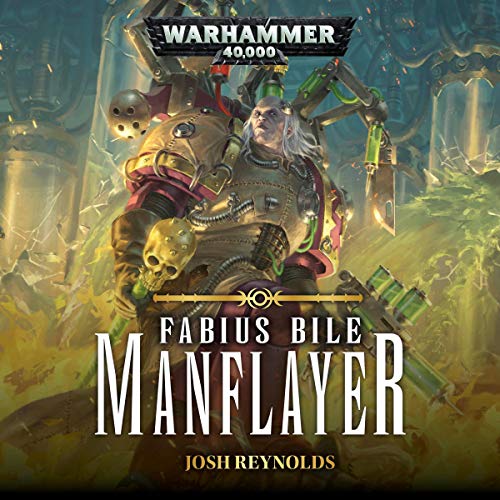 As his Homo Novus project comes to fruition, Fabius Bile faces a new threat - the dreaded haemonculi of the Thirteen Scars. Can he marshal his forces to protect his creations, or are the New Men doomed to death?

Listen to it because: discover what happens when you cross the Haemonculus covens...and what lengths Fabius Bile will go to in order to survive their deadly attentions.

The story: in the centuries since his return from Commorragh, Fabius Bile has distanced himself from the affairs of friend and foe, content only to oversee the cruel evolution of his New Men. But when his creations are threatened by the monstrous haemonculi of the Thirteen Scars, the Manflayer is forced to seek out new allies and old enemies alike in an effort to preserve all that he has built. Homo Novus must survive...even if Fabius Bile must die to ensure it.

What listeners say about Manflayer

A very insightful glimpse into the world and mind if Fabius Bile! I definitely recommend this to anyone curious about Fabius and the forces of Chaos in general. There is plenty of cool stuff for Drukari fans as well.

Loved it. but maybe rushed?

Space Pimp for the win!

Fabius is by far my favorite nefarious character in all of 40k and this book just made me love him all the more.

Great voice and subtle sounds really convey the unique crippling insanity of each individual damned soul. Bile is even more of an antihero losing the fight against the ruinous powers then before

40k novels are often hit-or-miss, but this one is a homerun. I'd suggest getting the first two books in the trilogy first though. part of what made this one so fun was the way it advanced characters and stroylines that began earlier in the series. It was a lovely read though, and one I had long looked forward to. Bravo.

Almost as good as the first two!

This one almost feels like someone else wrote it. A plot change, a minor detail missed, but still worth a listen. The narrator seemed to have trouble remembering which voices belonged to certain characters.

This story is a great continuation of the Fabius Bile story I highly recommend it.

best book out the three, his story was amazing. would highly recommend all three of them

The best book in the series. I really enjoyed the storyline and the disgusting description of each new realm of madness. we're all mad, the question is when will you give in to it?

An ending of sorts

A really somber ending of an amazing trilogy with a mass effect ending type of finale. It’s very fast paced but worth the read but defiantly a lot of information to digest constantly.

Great finnish to one of the best trilogies in 40k

A short summary of the book.

Fabius (sneering, of course): "Well, well, well....if it isn't the consequences of my own actions."

Its well written and read, the reader represents each character with different voice or accent making it clear who is talking.
Its fun to listen to and fascinating to see what fabius does.

I really loved this series. I highly recommend it. I really hope there will be more.

fabulous bill is hands down one of the best characters of 40k, great story, brill ending

Despite some other reviews I felt this was a good ending to the series.

Previous characters get wrapped up well, and the series ends on a bang with a surprising revelation.

great from start to finish. great twists and turns

brilliant character study on fabius bile, seeing the how he became who he is and how chaos manipulates everything

Fantastic end to a brilliant collection! I have thoroughly enjoyed following Fabius as he speaks to my inner self like no other has.

Brilliant ending to a brilliant trilogy

Tied everything up perfectly with some major characters from the 40k universe making some memorial chapters. I really hope to get more Fabius in the future as he is one of my favorite characters.

New and old enemy and foes

Loved it. Best of the series. Buy this book and you won't be disappointed. Ties all the threads from the series into a brilliant conclusion.

A great culmination of the series

loved how this whole series filled in so many gaps about Bile. narrating was spot on and really involved. ends with a kicker twist

This was a great story from the start and just got better!
I love the link to the current storyline being released in War of the Spider.

An excellent listen with the actors nailing their assigned roles. The story flows and is interesting. The ending isn't what i was expecting but it helps to drive the narrative nicely.

a good listen. a disappointing story direction however it is entertaining and well paced. I hope more are in the offering.