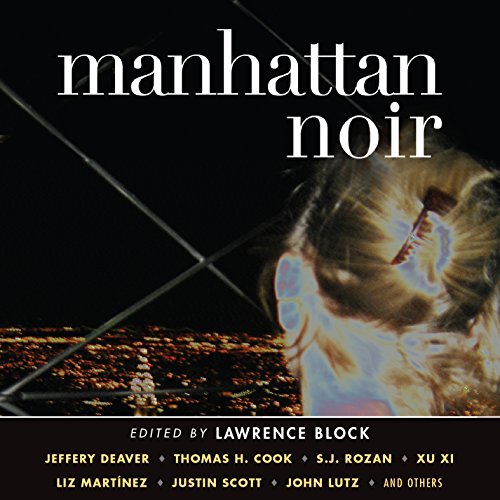 From the introduction by Lawrence Block: "Readers of Brooklyn Noir will recall that its contents were labeled by neighborhood - Bay Ridge, Canarsie, Greenpoint, etc. We have chosen the same principle here, and the book's contents do a good job of covering the island, from C.J. Sullivan's Inwood and Charles Ardai's Upper East Side, to Justin Scott's Chelsea and Carol Lea Benjamin's Greenwich Village. The range in mood and literary style is at least as great; noir can be funny, it can stretch to include magic realism, it can be ample or stark, told in the past or present tense, and in the first or third person. I wouldn't presume to define noir - if we could define it, we wouldn’t need to use a French word for it - but it seems to me that it’s more a way of looking at the world than what one sees."

The whole series is great!

I know, because I'm listening my way through every single book of these new stories by great writers who were invited to contribute something dark set on their home turf, by author/editors synonymous with the cities. Lawrence Block =Manhattan., Joyce Carol Oates = New Jersey., and around the world we go.

Each story is read by a different narrator, and all are good actors. The whole Akashic Noir experience is very entertaining.

I hate to drop a dime on this book

But it was truly Dime Novel stuff... and very NOIR.. ok so it's supposed to me noir... but it was not entertaining, titillating, interesting... sorry