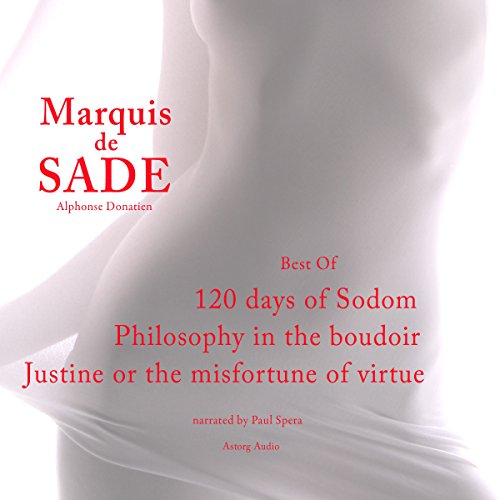 Best Of Marquis de Sade. 120 Days of Sodom / Philosophy in the Boudoir / Justine or the Misfortune of Virtue

Discover an abridged version of Marquis de Sade most famous and outrageous masterpieces:
"Philosophy in the Bedroom" ( La philosophie dans le boudoir) was written in 1795 by the Marquis de Sade, while he was imprisoned in the Bastille. It is a work of extreme pornography, laced with socio-political subversion. The main characters are libertines, who decided to give a young maiden their own brand of sex education. They explain to her that pleasure is the most important goal of all, and then proceed with affirming that she will not be able to feel "true pleasure" without pain. Then they get down to the practical lessons.

"Justine, or The Misfortunes of Virtue" is an early work by the Marquis de Sade. It is a novella, written in two weeks while he was imprisoned in the Bastille. Unlike some of his other works, it is not just a catalogue of sadism. It is meant to bring new life to an old genre, which had the reader accustomed to see virtue eventually triumph after trials only meant to bring out its value. Sade would have none of that in Justine: in her quest for virtue, the main character keeps falling into terrible situations, which humiliate her and present her with sexual lessons hidden under the mask of virtue. She seeks refuge and confession in a monastery... All of this is narrated by Justine herself, on her way to the gallocks. Napoleon Bonaparte ordered the arrest of the anonymous author of Justine and Juliette, and as a result Sade was incarcerated for the last 13 years of his life. The book's destruction was ordered by the Cour Royale de Paris on May 19, 1815.

"The 120 Days of Sodom" is "the most impure tale that has ever been told since our world began". It was written by the Marquis de Sade, in the span of 37 days, while he was imprisoned in the Bastille. Fearing confiscation, he had to write it on a continuous roll of paper, made up of small pieces glued together.

Explicit Language Warning: you must be 18 years or older to purchase this program.

not worth the purchase price

not the full books.
sounds like it was recorded on someone's home computer in the closet.
not edited at all (if the reader rereads a line to get it right the second time you hear the both)
the voice talent is rather flat.
highly disappointing

I had interest to read this as a taboo book and I was expecting it to be filled with morally corrupt personages and titillating scenes.
The work delivered, unfortunatelly this abridged version (which is not advertised but by saying "Best of" in the title) is mutilated to the point of not being comprehensible and leaving out important passages on the secondary stories. Of the 120 days of sodom it squarely misses 2/3 of the book.
Definitely I would not recommend.

not for the weak

These were excellent books, each one more than the last. the author has a very descriptive writing style and paints a very vivid picture. the subject matter it's is dark and sexual in nature so be forewarned. definitely do not listen around kids.

I literally do not know how they are able to distribute this book. It is children.

Badly read, badly edited and incomplete .
It says nine more words needed. These are they