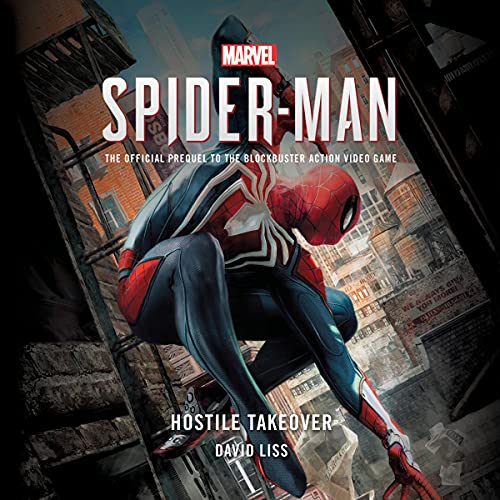 Peter Parker is caught in a complicated web. Working in a cutting-edge laboratory, he's a young scientist who's trying to make a difference. Yet he's constantly burdened by the responsibilities of his second career as the crime-fighting Spider-Man.

Wilson Fisk - the so-called Kingpin of Crime - has returned to New York, establishing himself publicly as an altruistic entrepreneur and philanthropist. Spider-Man knows better, but he can't uncover Fisk's scheme, which, if executed, will make the crime lord too big to fail.

When a new threat - a deadly doppelganger with Spider-Man's suit and abilities - wreaks havoc in the streets, can the real wall-crawler prove his innocence? With the clock ticking and lives on the line, can Spider-Man stop the brutal rampage of the Blood Spider? Will Spider-Man fall to his fears and foes, or will he rise and be greater?

Fantastic Buidup To the game

LOVED HOW THE BOOK builds on the game.The narrator was a bit one note but still good.

Wow! What a great prequel to the game. It all makes sense!

It had such a satisfying end. It linked right up to Spider-Man swing into Fisk tower to take him down and it was a seriously good book. Worth a read if you are a marvel fan.

It is a graphic novel.

This really reads like one. And a lot of thought went into this. I played part of the video game and some pieces do slide into place. Think of it as a crossover novel. As a stand alone you want to know what happens to Echo and Mary Jane. I could listen to it again when I am just grapping a story to hear.

Great Story for both who played the video game and those who did not!

It is a surprising self-contained story that takes place before the video game.

I think the conflict with Mary Jane is terribly written and is the low point for the book, but the introduction of both famous and lesser known villains is do extremely well.

Would recommend book, but really it’s a one time read nothing worth going back to or to gain upon repeat listenings.

Seriously this was amazing. Loved the readers performance on top of portraying Peters jokes and humor. And it was totally obvious when Jonah was introduced. SERIOUSLY amazing. Loved having Maya/Echo in this. And here i am thinking she was JUST introduced in Hawkeye... Boy was i wrong. And yes people i understand shes from the Comics...BUT I DONT READ EM ... Yet! Totally recommend this story and now onto the game!

it expands the universe of marvels spiderman perfectly. has a great story only complaint is sometimes concentrated more on the new people than spiderman himself.

This has git to be one of the best spiderman stories ever told! I need more of this version

Pete Cross does a good job as the story progresses it appears that he gets more comfortable changing his voice for each character.
The story is well written for a great prologue to the Insomniacs Spiderman. After listening to this book it makes me want to play the game all over again!
Could it have been better of course… does it have to be? Not really!
It was very enjoyable GOOD JOB!

Great lead-in to the game.

Overall, loved this. My only gripe is that it felt like the reader didn’t do his research prior to his reading. Several characters were given voices and inflections that didn’t match the characters in the game. (Examples being Shocked or Jeff Davis)
Not looking for 1:1 representation, but the distinct differences just felt jarring.

That said, I felt he was an excellent narrator, Peter Parker, and MJ. I felt he nailed Yuri as well.

i feel like this story was trying to do too much for too little. Mary Jane and Peter Bickered the entire book. Also Spider-Man was barely a presence there.

Could have been better

I loved this but the narrator just used his regular voice, also it was hard to keep up with the story

I didn’t expect it to be as good as this by a long shot!

I decided to listen to this book before starting the game and now that I’ve finished I can’t wait to play!
The performer was really good, I felt as he did different voices (even female ones) that each voice felt like a totally different character.

Even if you’re not a major spider-man fan this is a good mystery/crime novel that was very satisfying.

I bought this having the game,but I was super sceptical..oh my days,how amazing is this

A bit slow paced dependent on what you want from the story, more of a detective type storyline, good voice actor for spidey but not a wide range of difference for the other characters voiced, worth a listen 👂

A good prequel to the game

I really enjoyed the story and the characters. I had played the game beforehand and still found the book really interesting. You get to know what Peter Parker was doing before the game and how it leads to the game’s opening.

I would definitely recommend to anyone who has played the game or is thinking about playing it.

Gonna have to replay the game now

Was incredible. Definitely adds a lot more weight to the beginning of the masterpiece that is the ps4 game.