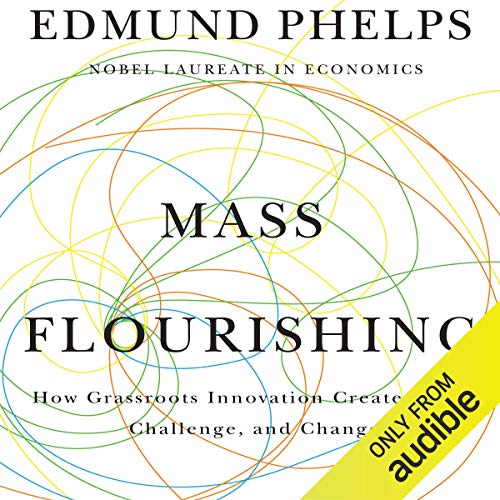 In this book, Nobel Prize-winning economist Edmund Phelps draws on a lifetime of thinking to make a sweeping new argument about what makes nations prosper--and why the sources of that prosperity are under threat today. Why did prosperity explode in some nations between the 1820s and 1960s, creating not just unprecedented material wealth but "flourishing"--meaningful work, self-expression, and personal growth for more people than ever before? Phelps makes the case that the wellspring of this flourishing was modern values such as the desire to create, explore, and meet challenges. These values fueled the grassroots dynamism that was necessary for widespread, indigenous innovation. Most innovation wasn't driven by a few isolated visionaries like Henry Ford; rather, it was driven by millions of people empowered to think of, develop, and market innumerable new products and processes, and improvements to existing ones. Mass flourishing--a combination of material well-being and the "good life" in a broader sense--was created by this mass innovation.

Yet indigenous innovation and flourishing weakened decades ago. In America, evidence indicates that innovation and job satisfaction have decreased since the late 1960s, while postwar Europe has never recaptured its former dynamism. The reason, Phelps argues, is that the modern values underlying the modern economy are under threat by a resurgence of traditional, corporatist values that put the community and state over the individual. The ultimate fate of modern values is now the most pressing question for the West: Will Western nations recommit themselves to modernity, grassroots dynamism, indigenous innovation, and widespread personal fulfillment, or will we go on with a narrowed innovation that limits flourishing to a few?

A book of immense practical and intellectual importance, Mass Flourishing is essential reading for anyone who cares about the sources of prosperity and the future of the West.

unable to understand any of it

Every individual sentence in this book is understandable, and the narration is excellent.
However, no matter how closely I listened or listened a second time, none of the ideas stuck. I'm disappointed, because I was looking to learn something from this book. Even though I stuck it out to the end, I walked away empty.

Meh. Not worth the time.

The performance is excellent. The case is disjointed.

The author occasionally provides a thought provoking idea or observations, but none that can't be gleaned from other sources.

Did Mass Flourishing inspire you to do anything?

Write this review to save others from this diatribe.

I read a lot of economic books and am fairly well versed in this area and found this book not worth the time. The first half is yet another lesson in laissez faire libertarianism. As if anyone reading this book needs another lesson on the subject. The second half of the book is a long-winded diatribe that never seems to sum anything up. Concepts are fuzzy and policy prescriptions are seemingly at odds with the author's view. For example, he proposes a hands off government approach AND NEW GSEs or direct government involvement in banking in some cases. Some things in the book appear outright intellectually dishonest, such as his claim that mutual fund managers hold CEOs hostage to meet the quarterly numbers. This simply does not happen because MF managers don't have that kind of power! In almost the same breath, the author praises hedge fund managers as efficiently allocating the country's capital! Apparently, the author lives in some sort of academic bubble, preferring to apply what he thinks is the real world to his arguments. Both of these assertions couldn't be further from the truth.He goes so far as to criticize the younger generation for being too consumed with social media, for not knowing solitude and thus not being creative and having original thoughts. As if creativity and original thought hasn't exploded on the web! I picture an old curmudgeon writing that section while yelling out the window at kids to get off his lawn and proceeding to say "in my generation...". For someone supposedly writing on "progress", his own bias against modern technology is truly astounding.My review is already too long. Just get one of the many other books on the subject instead.

Cannot get engaged enough to complete the book

What disappointed you about Mass Flourishing?

I can’t help feeling that this is a waste of an opportunity for an intellectual and experienced professor to make an engaging narrative contribution to the economic debate. The narrative meanders without drawing you in to understanding the point and I found myself continually checking out and having to re-listen. This is the first book I will give up on just a quarter of the way in. There are so many others that I want to read and its simply not worth the effort. Having looked through other reviews I am still at pains to extract the key message. This is a great shame as I suspect there could be something of merit to glean. I disagree with other reviewers, I didn’t find the reading performance well done either.

Hopes and Prospects by Noam Chomsky
or Brave New World

Would you be willing to try another one of Stephen Hoye’s performances?

It would depend on how important the book was but possibly not.

The central idea is interesting but the digressions wander too far. Good narration of difficult audio material.