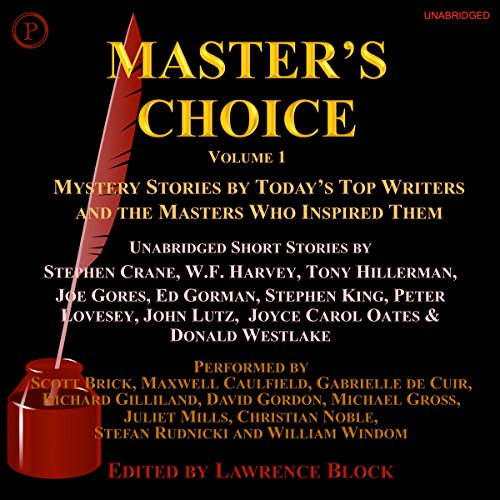 Listen to mystery stories by today's top writers and the masters who inspired them. The idea for this collection came to Mystery Writers of America Grandmaster Lawrence Block when he was asked, "What is your favorite mystery story?" Block compiled this unique collection by posing the same question to some of today's favorite writers of the genre. You'll hear: Peter Lovesey's "The Crime of Miss Oyster Brow" paired with Donald Westlake's "Too Many Crooks"; Stephen King's "The Wedding Gig" and one of his favorites, "Murder-Two" by Joyce Carol Oates; "En Famille" by Ed Gorman beside Stephen Crane's "The Blue Hotel"; Tony Hillerman's "First Lead Gasser" and "Goodbye, Pops" by Joe Gores; and "High Stakes" by John Lutz with W.F. Harvey's "August Heat." Certain to delight, enthrall, startle, and entertain, Master's Choice is a tribute to the enduring art of storytelling.
©1980 by Stephen King; 1993 Tony Hillerman; 1984 by John Lutz; 1969 by Joe Gores; 1998 by Joyce Carol Oates; 1989 by Donald Westlake; 1996 by Ed Gorman (P)1999 New Star Media Inc.

Another great Dave Robicheaux novel by James Lee Burke, and this one really had me guessing until the end. Great mystery! Burke's descriptions of both the people and the land of Louisiana are beautifully expressed. And, Will Patton does an absolutely great job on the accents of the characters. You'll think you're on Bayou Teche, for real.