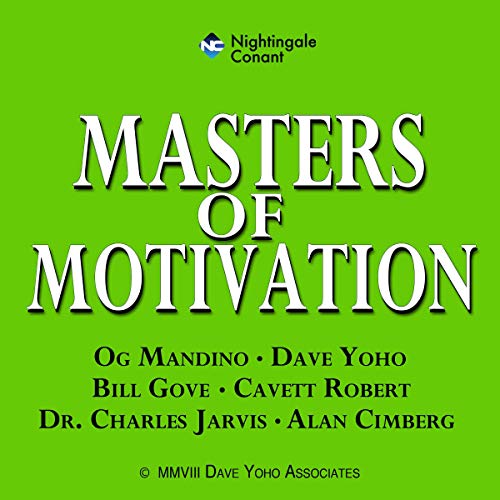 This audio is a compilation of six legendary speakers. Upon its release, it was one of the top-selling audios in the United States. The popularity of this product is a testimony to the skill, style, and uniqueness of these speakers, each of whom was a major contributor to the early success of the National Speakers Association.

You will hear these six Masters of Motivation in their original unedited state, and you will have the opportunity to listen to a special bonus audio by Dave Yoho called “Creating A Motivational Environment”.

What listeners say about Masters Of Motivation

The authors master their subjects very well, the book is very captivated. i started it overnight and finish it the next day because i could not get enough of it. Every word, every moment worth spending it.

great collection of masters that will motivate and inspire anyone. it is a must listen!

The sound quality is terrible, to start with. It sounds like someone in the back of the room was recording the lecture with a dictaphone. But more important, these pompous and entitled rich men tell offensive and outdated jokes throughout their presentations that are not funny, and definitely offensive. For example, one joke involves a doctor who treated a patient for yellow jaundice for years before he figured out he was a chinaman. Another jokes that a successful man earns more than his wife can spend, and a successful woman finds such a husband. It gets worse than that. C'mon, guys. The speeches are not much more than really bad standup comedy, and are not relevant today. There is one exception -- Og Mandino -- he is just as pleasant and delightful by today's standards as he was then. His principles of love and respect stand the test of time, just as his scrolls do. Do yourself a favor and skip this audible book, and just get an Og Mandino book. The rest of the guys are just jerks.