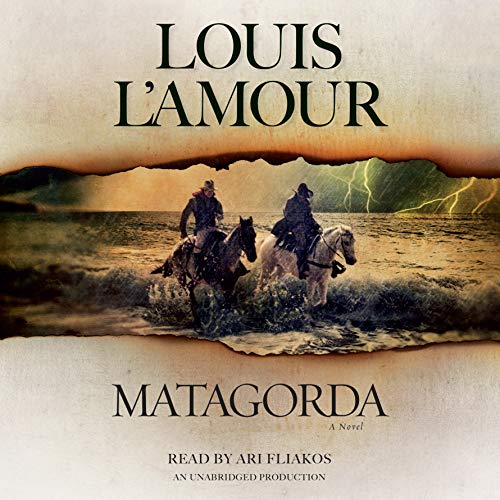 Tap Duvarney lost his innocence in the War Between the States and then put his skills to the test as a soldier in the frontier army. Now, leaving behind a devoted fiancée, he is trying to make his fortune on the Texas coast, working a ranch as the partner of his old friend Tom Kittery - and finding himself in the middle of a feud between Kittery and the neighboring Munson family.

Around Matagorda Island, most people are either backing the Munsons or remaining silent. But the danger from outside Kittery’s camp is nothing compared to the threat within, as Tap begins to suspect that Kittery’s woman, a Texas-born beauty who misses the glitz and glamour of city life, isn’t everything she appears to be. Tap is quickly discovering that he must go to war again. But will it be with the Munsons - or with his closest friend?

What listeners say about Matagorda

Good read but not one of the better ones.

This was a pretty good novel and potentially great story about the author spend too much time on the hurricane. I think it would have been better had the Arthur plate out more of the critical scenes and added to the someone average story line.

This is a great story. Written by a great legend. It doesn’t disappoint. Great read.

Fun with cows and women and pistols.

Another great western story written cleaverly and descriptively by a man of the American west.

great book as usual from my most favorite writer. I will have more reading from him in the future

very good story kept me in suspense till the very end.....highly recommend it to anyone

most enchanting cowboy story with sea and roundup

lovely depictions of Texas panhandle with great story of hurricane wiping out the town of Entola based on facts. Fuedal society and southern ways blend in.

A Hurricane and a Cattle Drive in Texas

A cattle drive mixed with a land war and a hurricane in Texas. My favorite character shows up toward the end. Another great book by L'Amour.

Wonderful. story. It held my attention. It could have been a little longer? I love a good old western.

it doesn't get any better than Louisville L'Amour.
good guys win & marry the girl.