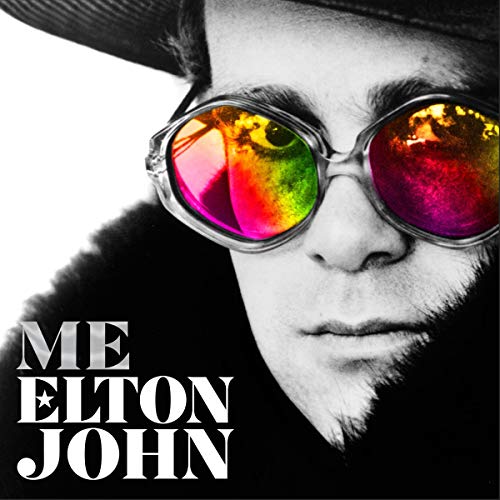 In his first and only official autobiography, music icon Elton John reveals the truth about his extraordinary life, which is also the subject of the smash-hit film Rocketman. The result is Me - the joyously funny, honest and moving story of the most enduringly successful singer/songwriter of all time.

Read by actor and star of Rocketman, Taron Egerton, with an introduction and epilogue read by Elton John.

Christened Reginald Dwight, he was a shy boy with Buddy Holly glasses who grew up in the London suburb of Pinner and dreamed of becoming a pop star. By the age of 23, he was performing his first gig in America, facing an astonished audience in his bright yellow dungarees, a star-spangled T-shirt and boots with wings. Elton John had arrived and the music world would never be the same again.

His life has been full of drama, from the early rejection of his work with songwriting partner Bernie Taupin to spinning out of control as a chart-topping superstar; from half-heartedly trying to drown himself in his LA swimming pool to disco-dancing with the queen; from friendships with John Lennon, Freddie Mercury and George Michael to setting up his AIDS Foundation. All the while, Elton was hiding a drug addiction that would grip him for more than a decade.

In Me Elton also writes powerfully about getting clean and changing his life, about finding love with David Furnish and becoming a father. In a voice that is warm, humble and open, this is Elton on his music and his relationships, his passions and his mistakes. This is a story that will stay with you, by a living legend.

"Self-deprecating, funny.... You cannot help but enjoy his company throughout, temper tantrums and all." (The Times)

What listeners say about Me

Loved the book, Taron Egerton's reading is perfect. This book had me laughing throughout.

Elton John is a wonderful writer - engaging, a talented eye for detail, and very, very funny. Taron Egerton is the perfect narrator. I listened to it every spare moment I had, and then listened again. Highly recommended

I have so much more respect for Elton John after listening to his autobiography. What an incredible life and the way he tells his story is so honest. I wished it could have been read by Elton himself but after listening to the book I understand why it may have been very tough for him to do it. Tarron’s reading was brilliant and you can hear he enjoyed telling Elton’s story.

Nothing is hidden. It is a true reflection of his life. His mom sounds horrible. They are not trying so spread some profound message through this book. It a perfectly written biography and this is how all biographies should be!

Brilliant book, narration is wonderful. An absolute necessity for anyone who has any interest in Elton or the music of the time. A frank account of his addiction and excesses, moving at times, it takes the listener on a epic journey as the captain, Elton rises to conquer the world from his humble beginnings in the suburb Pinner, along with Bernie, the kid from Lincolnshire. It’s clear he’s not forgotten his roots or the people who helped him along his way, or those who had such a musical influence and shaped his music. Can’t recommend it highly enough.

It feela honest from start to finish. An insight into a world most of us will never be a part of.

Fantastic narration by Taron Egerton. Really puts emotion into the words. Feels like an honest story by Elton John.

Hilarious recount of a fascinating life

Elton is funny and unafraid of telling his story warts & all.
Taron’s narration was awesome and really enhanced an already hilarious book.

Beautiful biography, absolutely incredible. Thank you for taking the time to share your story Elton ❤️

I don’t do autobiographies but I am an Elton John fan.
The story took me back to my childhood in the 70’s and a prized copy of Elton Johns Greatest Hots vol 1 on green cassette.
I loved the film, but wanted more and boy does this deliver, I’ve only seen Elton once and that was at the Freddie Mercury tribute concert, luckily I will be seeing him later this year as part of his tour.
Needless to say, I can’t wait!

Just amazing. The story and narration is sensational! I love Elton John even more now I have listened to this

Don't expect Elton to read this...

I loved the story, and the incredible life that Sir E has lived. Outstanding. I noted before I downloaded it that it was read by Elton and Tarron , and was expecting as such. I think Elton reads the prologue, which is about 5 minutes overall. The rest is read by Tarron, who frankly murders it. Overacted, soulless and totally devoid of meaning. So so disappointed, would have loved to have heard those amazing stories, read by the man himself.

This is the first audio book I’ve ever listened too, Elton Johns story was emotional and funny; I’ve never laughed so much during a book. Taron Egerton reading is just the icing on the cake - from playing him in the biopic to reading his audio autobiography.

This was worth 11 hours of listening...highly recommend. A man who has been through many ups and many many downs

If I’ve taken one thing from this audio book. Don’t take cocaine. Ever

A superb highly amusing, and sometimes sad, read from beginning to end.

I loved this book. I've never been a particular fan of his music, being a baby when Elton John enjoyed his first success, but always thought he came over as a decent and caring bloke.
I thought his autobiography would be interesting and entertaining, and I certainly wasn't disappointed. Throughout this fast-paced moving book Elton's sense of humour shines through and I found myself laughing out loud on numerous occasions. The guy tells a really good story against himself and this this book is full of anecdotes about other well known faces. What is really refreshing though is that the portraits he paints are affectionate and there is no nastiness. A thoroughly enjoyable book about a born surviour. I absolutely recommend this book whether you are a fan or not... you will be afterwards!
Taron Egerton's narration is the best I've listened to yet on Audible. You couldn't get a better narrator for this book.

I loved this book! I've always thought of Elton John as one of the greatest musical talents ever, and of Bernie Taupin as one of the greatest lyricists, and I've adored their collaborations over the decades. To see the background to that relationship and the desperate hardship of Elton's childhood, his father's intransigence and inability to love, his mother's selfishness and his love for them in spite of it brought me to tears. I saw Rocketman first, but then I had to have Me as soon as possible. It's well written, and well read. A real page turner. Go, buy, read, download, listen. You won't regret it.

Elton lays out everything about himself and his life in this remarkable autobiography. At times I really didn’t like him and couldn’t understand how anyone could behave like that..however even Elton got fed up with his behaviour and changed it.... and the book reflects that journey.

I could not stop listening .

The book was never boring,interesting and honest, humours and sad and everything in-between.

Excellent narration, kept me going back for more.

You do not need to be a fan of Elton to read this I like his music and loved the movie,but I am no means a super fan, the book kept me enralthed.

I knew this book would be a rollercoaster of emotions. However I did not know how much. It is just sublimely, outrageously amazing, the truth, heart and honesty is touching in a way that words can't give justice to. I loved Elton before now I feel a connection that is more than fan to star, some of his experiences mirror my own. Knowing this has changed me and my outlook, Sir Elton I thank you from the bottom of my heart for this book xx

Loved the stories and narration by Taron was perfect. Such an idol with a colourful life this is a great listen with some very funny moments.

great listen Taron Egerton made me laugh so mush and if you've already seen rocket man then it flashes you back to the movie. 100 % recommend this book.

So brilliant. Want to re-read it straight away! Loved Egerton’s narration too!! Urge any Elton fan to listen!

What a tale, this made me admire the man even more, what an outrageous and caring man. Taron Egerton was superb as the narrator. This is the best audio book I have ever listened to.

just like the man himself ! Taron did a great job reading Elton's words. loved this book.

Hard to listen to. Story is good but needs to be recorded with Elton speaking his story

This has to be one of the best bios I have ever read/listened. The book is like a roller coaster as Elton takes you on a journey of his lows and highs through life.

A brilliant autobiography of someone that really has lived an incredible life. Hilariously funny, inspiring, and honest. Thank you Elton for sharing your life story with us.

How blessed we are to have such a gorgeous human grace this planet.
With all his ups and down. His extraordinary life is shared freely, honestly, deeply.

Thank you for letting us know, a little bit more of you.

Raw, honest and full of emotion detailing both the “highs” and lows of an extraordinary life. I laughed out loud more than once and found it thoroughly entertaining. Brilliantly narrated by Taron Egerton and a treat to hear Elton himself narrate the beginning and the end. It was fabulous!

I have seen the Rocketman movie but this book dives in a lot deeper than the movie. This book tells you all of his real ups and real downs but there are no middles. He has lived an incredible life and gone through some incredibly terrible lows and has come out the other side. Thoroughly enjoyed listening to his life and now have a huge appreciation of what an achievement he has made.

The narrator is absolutely appalling, and has ruined a good book. He puts an enormous emphasis on every second word. The over-emphasis is so relentless, you just want to punch him in his stupid face.

It was wonderful to listen to and was great the Elton also read part of the book. I loved it and I love Elton. ❤️