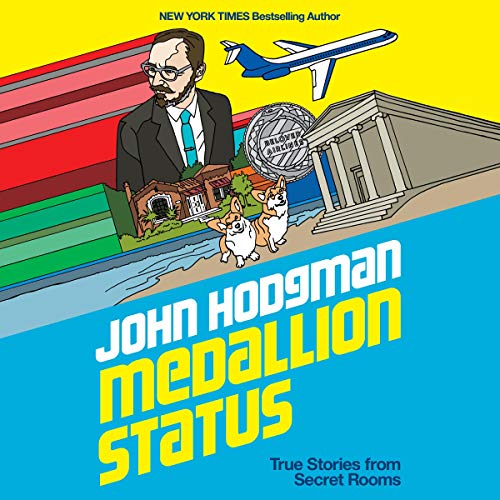 "[An] affecting and hilarious meditation on fame and prestige as seen through the lens of an airline loyalty program." (The AV Club)

A hilarious and honest new audiobook in which John Hodgman, New York Times best-selling author of Vacationland, leaves vacation behind and gets back to work as a still somewhat famous person...and then loses his job. An uproarious listen.

After spending most of his 20s pursuing a career as a literary agent, John Hodgman decided to try his own hand at writing. Following an appearance to promote one of his books on The Daily Show, he was invited to return as a contributor. This led to an unexpected and, frankly, implausible career in front of the camera that has lasted to this very day, or at least until 2016.

In this audiobook, Hodgman explores the strangeness of his career, speaking plainly of fame, especially at the weird, marginal level he enjoyed it. Through these stories, you will learn many things that only John Hodgman knows, such as how to prepare for a nude scene with an oboe, or what it feels like to go to a Hollywood party and realize that you are not nearly as famous as the Property Brothers, or, for that matter, those two famous corgis from Instagram. And there are stories about how, when your television gig is canceled, you can console yourself with the fact that all of that travel that made your young son so sad at least left you with a prize: platinum medallion status with your airline.

Both unflinchingly funny and deeply heartfelt, Medallion Status is a thoughtful examination of status, fame, and identity - and about the way we all deal with those moments when we realize we aren't platinum status anymore and will have to get comfortable in that middle seat again.

"Boston-born, Yale-educated humorist/writer/actor John Hodgman has been blessed with a voice that makes him sound like a world-renowned authority and a nincompoop at the same time. It's a wonderful combination.... A must-listen for all those who appreciate breakfast and comic genius." (AudioFile Magazine)

"Conversational, funny...the focus is on the bizarre state of being liminally famous in a culture that so desperately celebrates fame.... Hodgman has dozens of funny stories to tell, ranging from recollections of early jobs to the time Benedict Cumberbatch messed with his mind." (The AV Club)

"This funny, sometimes delightfully absurd book offers sharp meditations on status, relevance, and age, and fame - or at least being fame-adjacent." (Publishers Weekly)

What listeners say about Medallion Status

Honestly I think his best writing is centered around his family and his life in Maine. But he tells you in the very first essay that there will not be a lot of either in this book.

The airline stuff, the Florida stuff is pretty entertaining, but the endless laments regarding fading fame, parties he is not invited to, and his bit parts on TV shows....not his best work.

Medallion Status is probably the best collection of personal essays I have read since I discovered Harlan Ellison one fever driven day at the library as I looked for something to read to take my mind off my cold. Hilarious, heartfelt and humble John Hodgman has a unique and interesting way of looking at the world and his stories illuminate all the exhilarating facets involved in everyday events

Didn't want it to end

I just finished the audiobook version of John Hodgman's "Medallion Status". It's been a long time since I loved a book enough that it made me sad when it ended. It was the same combination of intelligence, nerdiness, humor and enormous wisdom about the human condition that makes me love his work so much. The story is wonderful, and made even better with Hodgman himself as the narrator.
(If you're not listening to his podcast, "Judge John Hodgman", you should be.)

This book (like Vacationland) will be loved by anyone who is a fan of JJHo podcast or John Hodgman in general.

And like VL, this book is equal parts heart warming and soul crushing. Life is beautiful, funny, and everything dies. It’s a lot to take in, but it’s wrapped in a great narrative and humor, so it is enjoyable. Now I’ll go and contemplate my existence for a while. Thanks John.

As a fan of the Judge John Hodgman podcast and all of Hodgman’s earlier books but as a person who doesn’t watch very much, he’s been famous to me for so long for all the wrong reasons. Besides when he was a PC and a few times on The Daily Show, I’ve always just known him when he was being a voice in my earbuds. He can never lose status with me. And his honest, funny, personal writing has always struck me as his attempt to shed his fame and status and show his true self to himself and the people in the world. I loved this book.

John Hodgman is good a making a minority experience resonate for non famous people. Middle aged people wonder at our impact and importance, regardless of status. Medallion Status’ version of this potentially mopey navel gazing is funny and touching and self aware. This is an upper middle class white dude who is well aware of his privilege; despite an obvious addiction to praise doesn’t perform his sensitivities, he just has them and communicates them humbly. A wonderful listen for a grey fall day.

After listening to Vacationland, I was excited to see another book coming out by John. He's a great writer and hearing him speak his stories is a delight.

I thoroughly enjoyed listening to this book and it made me laugh out loud several times, but there is also a poignancy that brought tears to my eyes on many occasions. I highly recommend.

A unique and alway hilarious voice

I've read every John Hodgman book and (including the fake trivia trilogy) they always demonstrate a unique perspective, a wonderfully oblique and wry sense of humor and his essential decentness. This book is no exception and it hit very enjoyable personal notes with me in terms of my own dumb frequent flyer obsessions. I love all his books but this one was especially pleasurable. As an FYI, I strongly suggest the audiobook. His own voice definitely enhances the experience for me.

Fantastic! I listened back to back with Vacationland and didn't want to stop. Highly addictive.