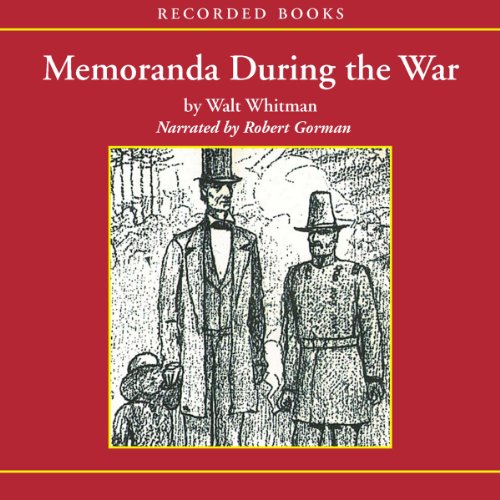 Memoranda During the War

"The real war will never get in the books," Walt Whitman wrote in this diary he kept during the Civil War. Whitman chronicled his visits to Washington, D.C. hospitals where he comforted wounded men and assisted nurses and doctors. This journal, written by one of America's greatest poets and writers, captures the details and ironies of war.
Public Domain (P)2007 Recorded Books

When his brother was injured in battle, Walt Whitman went to see him on the frontlines. There, Whitman was shocked by what he saw. Memoranda During the War is Whitman's firsthand experiences of the Civil War. Best known for his book of poetry Leaves of Grass, Whitman is a lyrical writer like no other. Robert Gorman does this literary giant justice in this performance. Gorman's tone is soft and expressive. He treats each word with special care, concerned for the sounds, the assonance, and the alliteration. With gentle pacing, Gorman catches the listeners' imaginations. These stories of soldiers, battles, doctors, and the ramifications on a nation are as important as they are beautiful.

Yes, it was both interesting and boring. It was interesting to hear Whitman's first-hand accounts of Civil War life, visiting soldiers in the hospital and the political tone of the time. And while all that was interesting, it was dry and, well, a bit boring at times. Civil War buffs would probably enjoy this more than the Average Joe. I'm glad I listened to it, but not so sure my life was changed by it.

Poignant observations from a compassionate heart

I have always loved Walt Whitman's poetry but did not have a real sense of him as a man until I listened to these tender, insightful and achingly poignant observations of the field hospitals during and after the Civil War. They are very moving snippets from his journal, very honest and personal. I was surprised that I had not heard of them earlier, as I am a Civil War 'buff'. This is a valuable contribution to knowledge about that time. Whitman's kindness to both 'secess' and Union soldiers made me appreciate him all the more. I did not give this a 5 star rating because it is not 'of a piece', but an odd assortment of topics in a bit of a mish-mash rather than an integrated work; it is from a diary, after all, and not actually ever meant for an audience, perhaps. However, as a deeply caring and wonderful human being Walt Whitman earns 10 stars.