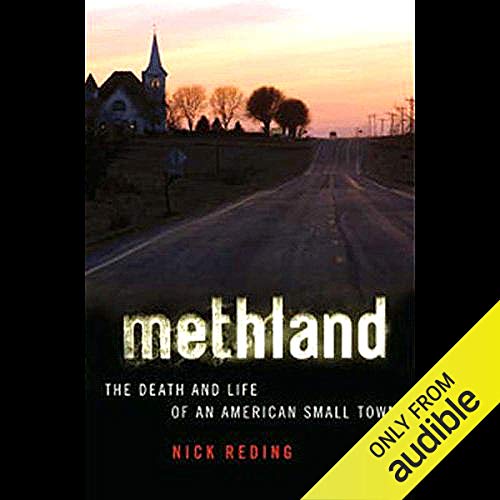 There is something about Mark Boyett’s voice that made him the narrator of choice for two nonfiction audiobooks published in close succession: The Good Soldiers by David Finkel and Methland by Nick Reding. The common factors of these books are authors who worked at the sites of their stories for protracted periods of time and developed personal relationships with the people caught in the terrible circumstances their stories depict, and the important issues for America the books represent. The Good Soldiers is a deeply moving, tragic, and heroic story of American soldiers fighting in Iraq. Methland is an American tragedy of engulfing, systemic, and tragic dimensions. Set in Oelwein, Iowa, Methland documents the destructive effects of methamphetamine on this small town, and, by extension, all of rural America and the rest of the country.

Boyett is an actor relatively new to audiobooks. His talents and skills are exceptional, and his voice has unique and impressive signature qualities. Boyett’s narrative voice ranges from a baritone of dramatic tonal solidity to the mid-to-high registries where he is expansive in more nuanced ways. Boyett has exceptional timing. And what is perhaps his strongest talent is the way he creates and shapes the book’s timing with his frequent and fluent shifts in intonation, stress, phrasings, emphases, and pitch — all the vocal gifts in the narrator’s quiver. In short, Boyett’s voice is actively expressive in quite an impressive way, and what is behind the voice is the narrator’s highly disciplined and methodical approach. Boyett does what the great narrators do: he greatly enhances and enriches the book’s contents.

Methland is a book of extreme contrasts. In its largest sense it is investigative journalism, objective reportage of the history and growth and destructive effects of methamphetamine. It is upfront and personal in its depictions of the people involved in the drama, and in many places it is down-home and personal. For instance, we become closely acquainted with the life stories of two upstanding and impressive young men central to the story: Nathan Lein, assistant prosecutor for Fayette County, and Clay Hallberg, the town’s doctor.

And then there is Roland Jarvis. “On a cold winter night in 2001, Roland Jarvis looked out the window of his mother’s house and saw that the Oelwein police had hung live human heads in the trees of the yard… Then the heads, satisfied that Jarvis was in fact cooking meth in the basement, conveyed the message to a black helicopter hovering over the house.” This hallucination has horrific, dreadful consequences, and Reding’s depictions of Jarvis living with these consequences are shocking, startling, and moving. The something about Boyett’s voice is his meticulously timed and constructed narration, his expressive fluency, and his ability to shift with ease within the existential extremes of normality and abnormality in nonfiction. — David Chasey

The dramatic story of the methamphetamine epidemic as it sweeps the American heartland a timely, moving, very human account of one community s attempt to battle its way to a brighter future.

Crystal methamphetamine is widely considered to be the most dangerous drug in the world, and nowhere is that more true than in the small towns of the American heartland. Methland tells the story of Oelwein, Iowa (pop. 6,159), which, like thousands of other small towns across the country, has been left in the dust by the consolidation of the agricultural industry, a depressed local economy, and an out-migration of people. As if this weren't enough to deal with, an incredibly cheap, long lasting, and highly addictive drug has rolled into town.

Over a period of four years, journalist Nick Reding brings us into the heart of Oelwein through a cast of intimately drawn characters, including: Clay Hallburg, the town doctor, who fights meth even as he struggles with his own alcoholism; Nathan Lein, the town prosecutor, whose caseload is filled almost exclusively with meth-related crime; and Jeff Rohrick, a meth addict, still trying to kick the habit after 20 years. Tracing the connections between the lives touched by the drug and the global forces that set the stage for the epidemic, Methland offers a vital and unique perspective on a pressing contemporary tragedy.

"Mark Boyett’s narration is terrific. He deftly conveys the town’s efforts to deal with the problem and defines various key residents. Particularly strong are his portraits of town doctor Clay Hallburg, who personally observes the growth of the drug and the decline of the town, and prosecutor Nathan Lein, whose caseload is almost entirely meth based." ( AudioFile)

What listeners say about Methland

For someone who was "familiar with the drug scene" meth is and was a truly scary drug. What this substance does to people and communities is terrible but this book goes FAR beyond the obvious. The effects of government policy and blatant corporate irresponsibility do damage individuals and the author does an excellent job of making connections. I could not stop listening to this (much to the annoyance of my family). Don't miss this one!

Nick Reding obviously put a lot of hard work and research into writing this book. The characters are real and they are unforgettable. Also, lots of great background on the impact of business, agriculture, the economy, immigration, politics and big pharma on America's struggle with this easily attainable, highly-addictive drug. Definitely worth a listen - keep an open mind. Not everything is as you think and understanding the complexities is the first step to reaching a solution.

A series of essays more than a book about anything

I'm from Iowa and I really wanted to like this one. Interesting subject(s) but it's not a riveting read. I struggled to find a beginning a middle and and end. When it was over I felt I had only read a first draft, I think the editor failed on this one. Instead of a book, I heard several essays, about a small town, about meth, about the drug trade but in the end, they were not tied together in a meaningful way. To make matters worse the essays were not well realized either. Each one had a few interesting pages but there is not enough to each to be compelling. What was the point about writing a whole book about methland? There's a book there but this wasn't quite it.

Absorbing view of a tragedy in progress

Even though the subject matter is profoundly depressing, Methland is an absorbing read. Looking at the rural meth epidemic through the lens of Oelwein, a quintessential midwestern small town in Iowa, Reding tells a story that's both personal and national. He makes a compelling case for his thesis is that the meth problem isn't simply a matter of addiction, but is strongly tied up in the working class history of the drug, weak regulation to control it (thanks to pharmaceutical lobbyists), and the continuing economic decline of rural America, where cooking meth in one's sink promised many people a steadier future than being a farmer or meat packer.

While the book's writing and analysis are a bit fragmentary, the personal stories paint a stirring picture of an epidemic in progress. The anecdote about the drug dealer who has started hallucinating living human heads in trees, and severely disfigures himself in a lab explosion, reads like a passage from a Stephen King novel. Other stories, while they sometimes wander from the book's primary focus, perhaps make a better point than pages of statistics. It's not hard to visualize broken families, grim, boarded-up store fronts, police forces and social services that lack the resources to do very much, and a cold, midwestern wind howling across a middle America whose fabric is steadily unraveling.

An interesting subject that attempts to chronicle the effects of Meth on a small town.

Then it's about the loss of union jobs. Then the Mexican cartels. Then the town again. Then Big Agra. Then the prosecutor's inability to settle down with the love of his life. Then illegal immigrants.

Great subject material in dire need of a good editor.

Methland should be read as a companion piece to Caught in the Middle: America's Heartland in the Age of Globalism - the micro results of the macro trends that have decimated once thriving agricultural and manufacturing towns in the midwest. As Reding tells the story, meth is a symptom of a larger economic and social story rather than a cause.

True, meth addiction and the meth economy feeds the beast of social decline and dysfunction, but the roots of meth's rise as the working class drug of choice, and the states inability to deal with either the producers or the addicts is structural. Reding's reporting strategy is personal and visual. We meet the people on all sides of the meth epidemic as full drawn and realized personalities. Anyone who reads Methland will have a hard time thinking about crystal addiction, manufacture or distribution as one only of personal failure.

I really really liked this this guy tackled this topic. I learned so much all the while feeling as if he truly cared about his subjects. Perhaps because he was telling a story so close to where he grew up? Informative yet reverent!

This book is totally frightening because it is true. The examples of decent people gone terribly bad are just shocking. I couldn't stop listening, even when the book bogs down into back history/meth production details. Yes it does bog down, but reading those passages is absolutely critical to understanding the depth and pervasiveness of meth addiction. So many wasted lives and hurt and heartache.

This was really a thought-provoking read.

I enjoyed listening to this tale. Last year I actually took a train to some of the towns mentioned in this story (towns so rural my gps listed 15 of the top 25 points of interest as cemetaries). The narration was perfect, and I estimate that 85% of the writing was perfect, too. But approximately 15% of it digressed pointlessly, and that's why I only give this 4 out of 5 stars. Still, the tale was entertaining and sometimes educational.

I listened to this book in just a few days, much more quickly than I would an audiobook of comperable length. This is because the story is engrossing from the start, abetted by Reding's skillful writing.

In the end, though, the writing is all I took from the book. It's a beautifully-rendered portrait of a small town in Iowa, and to a lesser degree, the entire American Midwest.

Reding attempts to view the methamphetamine problem in America as a metaphor, and in this he is unsuccessful. However, I would recommend the book for the beautiful writing and for the loving depiction of a part of America that is rapidly disappearing.