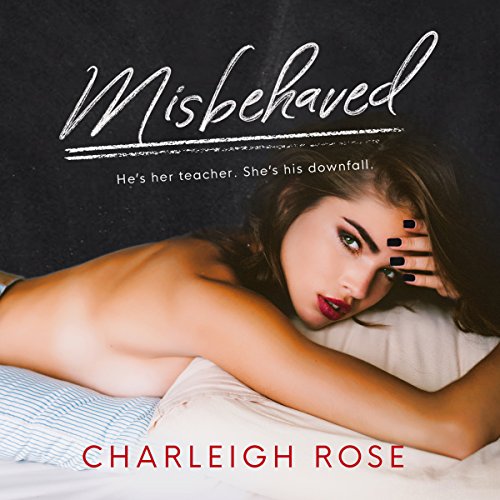 Remington Stringer has never been like most girls. She's outspoken and brazen and wants nothing more than to escape the Nevadan hell hole she calls home.

On the brink of 18, with a deceased mother and a well-meaning, yet absent father, she's been forced to fend for herself. The only person she's ever been able to depend on is her borderline obsessive stepbrother. But even that anchor is quickly becoming a loose cannon.

So when she gets the opportunity to attend the best private school in the state during her senior year of high school, she jumps at the chance. She meets Mr. James there. He's ornery, aloof, and totally irresistible.

What listeners say about Misbehaved

Not bad but not a repeat read

The story is okay, but has some really cringe worthy moments. The female narrator is good but the male is too breathy and has a weird lisp. It made the male lead seem super creepy.

Listening to pierce’s narrator was awful

I loved the story and the narrator for Remington was phenomenal but I wish they chose someone else as a narrator for pierce, I don’t know if it was just me but he sounded like someone’s grandpa and it was all I could think about while listening in his perspective.

Couldn’t get into it

The male narrator made the story SO hard to listen to. The way too soft tones, the slight lisp, pretty much everything about the way he talked gave me the creeps. Not good for an age gap romance.

The narrators voice for Christian is annoying!

I thought The Story was OK. It seemed somewhat unbelievable appoints. The female narrators voice for Christian graded on my nerves.

Male is horrible sounds like he's in his 80's

Mr. James was so hot! I loved his story and his character, and love Remi too. Others said the male narrator ruined this audiobook, but I disagree. He was definitely the wrong choice, since he sounds 60 instead of 25-30, but it didn’t ruin the book for me. I couldn’t stop listening, and thought it was a steamy, forbidden story.

Felt like a cheap knock off of Dark Notes

I love taboo books. I was so excited when I seen this story about a student and teacher. I was hoping for an original story, however it felt like a cheap knock off of Dark Notes by Pam Godwin. I say knock off because it felt like she was trying to follow the same storyline, but it fell so flat. It was predictable to a laughing amount and the narrators were not a good fit at all. They both sounded so much older than the characters ages, and the male’s voice was not sexy at all.

The male narrator has one of the most unattractive voices ever.
I absolutely love the female narrator in general, she's definitely one of the best. She does 100x better with the MMC than the male narrator does and I really wish they just would've had her do both. I'm usually bummed when a dual POV book is all read from a single narrator, but in this case, I realllllllly wish they stuck with just the female. Hearing this guy so sex scenes is honestly just gross. Totally ruined some scenes that otherwise would've been super 🔥

In regards to book:
Only a quarter way through and will update review once I'm done. So far though, it's awesome! I will usually dnf if it's the "h chases H and H pushes her away over and over" but the author made it work here. It was a good method to affirm the H isn't some sicko perv chasing young girls. It's working... BUT if this continues after they actually hook up/get together than I'll hate it.

Loved this book! Loved everything about it. Hot, sweet, sad, sexy, exciting.

P.S. Thank you soooooo f**king much for NOT making this h some sexually naive completely inexperienced virgin. Sick to f**king death of that trope and tbh I could've hated this whole ass story and would've still given it 4 stars for that element alone. Just earned yourself a new fangirl right here. Fucking kudos! win for humans with vaginas everywhere (not being told that somehow virgin equates to more worthy).

I loved this story so much. Lots of complaints about the male narrator sounding too old, but I thought he did pretty good. Definitely sounds older, but I didn't think he sounded that old. I absolutely LOVED Romona Masters narration, loved her voice, thought she captured Remi's character PERFECTLY. Sounded so perfectly like a teenager and also a woman at the same time. Overall great story.