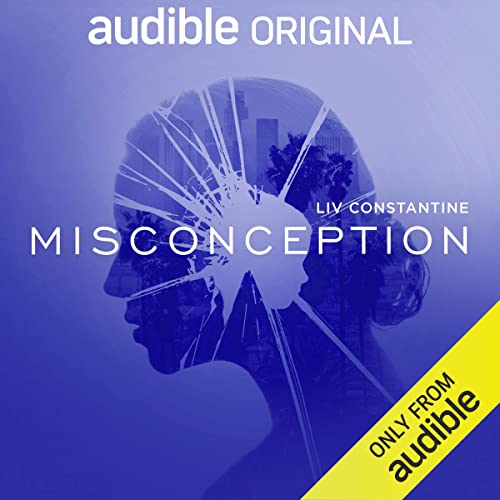 From the best-selling author of The Last Mrs. Parrish and Audible Original The First Shot comes an edge-of-your-seat novella of two women, the shocking betrayal that drove them apart, and a sinister secret that could change everything.

Iris Thomas thought she’d never have to see Sasha Everett again after Sasha seduced her husband and broke up their marriage in a devastating betrayal. But as luck would have it, when Iris’ stepdaughter, Molly, and Sasha’s daughter, Bailey, wind up in the same second-grade class at an elite private school in Los Angeles, they form an instant bond and force the two women back into each other’s lives.

Iris wants to put the past behind her and support Molly, but as time goes on, she suspects that Sasha may be guilty of something even worse than adultery—of a crime so sinister, no one besides Iris thinks it’s possible. But Sasha’s fooled Iris once before. This time, can she uncover the truth before it’s too late?

What listeners say about Misconception

Great short story. Performed very well. This will have u on the edge of your seat and even bring a smile to your face and a chuckle every once in awhile if you’re anything like me.

MISCONCEPTION, predictable yet also enjoyable and satisfying, is a two hour Audible novella.

Iris’s stepdaughter Molly is best friends with her ex’s bio daughter Bailey, whose mother Sasha was Iris’s former fertility doctor. Sasha cheated with Iris’s now ex-husband during those fertility treatments. Iris hoped to never see her ex and Sasha again. As Molly and Bailey’s friendship deepens, Iris notices her own similarities with Bailey and begins to suspect the unimaginable.

Character wise, Iris is as nearly perfect as Sasha is irredeemable. Iris’s ex does the right thing and they all live happily ever after while Sasha goes unpunished to offend again.

I think it's was the Tom Ford T and Audi

Not my thing, drivel. Only if you can stand a continuous infomercial for high end consumer goods. I won't know if it improves (didn't finish) , the prequel build up makes me gag.

Seriously, The premise is so thin and so,predictable I’m so glad it was free, it certainly was not worth spending money for it.

I LOVED THIS NOVELLA!! So sweet and a great story. Wish there had been more.

the story became pretty vlear after the allergy, I wish we would have delved more into the back stories outside of the marriages

It was a good afternoon read. It was predictable but I enjoyed it! Overall a good book

I figured out the "secret" early in the story & while I usually enjoy a short story this one ended badly .Iris did get her happily ever after, But the fact that Sasha, who should have lost her medical license & spent some time in lockup or at the very least got a good old-fashioned butt whooping, skated away with a fortune, NO repercussions & the chance to ruin another woman's life for what she did. The title should have been Criminal Conception.

Kind of a boilerplate experience. I was disappointed that the resolution was so anticlimactic.

Grit to listen to the twists oscillating between sense & horror

Grit to listen to the twists oscillating between sense & horror in a riveting & fascinating. Well laid out.

Fortunately that is only a couple of hours that I am never, ever getting back!

as a short story it was good, but I guessed about the girl half way through, so I knew the outcome, thing is I'm good at guessing who the murderer is in books, no murders here though

The writing style and plot were both engaging and had so much potential. Yet the one dimensional narrative and characters ruined what could have been. Despite being written alternately from the points of view of two different women, this book somehow fails to paint either of them as full individuals. Instead it simply subtly reinforces the patriarchal madonna/whore dichotomy, whilst showing an immense lack of both compassion and understanding of human behaviour. It was I think supposed to finish leaving the reader feeling hopeful, but it just made me angry. A waste of time.

this story was so good enjoyed every minute. As a mother of an IVF baby I could resonate with the character's the heartache and the joys

Short and suspenseful. Really enjoyable listen.
I thought it is a story which opens up many moral issues.
Highly recommend it.

Predictable and shallow. Annoying narration, the whining ‘voices’ of, particularly the child character, but I stuck it out hoping for a worthy ending. Alas, onto the next book!

I know it’s a novella but I just experienced what could be the most annoying characters in the universe with no depth, the most obvious twist that was literally so forced and the dumbest resolution.

Engaging enough to to be a fun driving listen. A short story to keep you entertained.

Predictable plot with cartoonish characterization. The main character is lovely and the villan is completely malevolent even in the character's own perspective. The dialogue was often stilted, especially when we had to wrap up the ending. But still a lot of fun and it explored some interesting themes such as fertility and family.

Very easy to listen too. Although it was predictable it was still a really good read. I do feel like this book could have easily been longer as it had a great plot and twist. I reckon the author should turn it into a full length book. So much to tell and so much more I want to know.

While I enjoyed the story, I had predicted the outcome just by reading the blurb. The main character jumps to the conclusion that it's her daughter nearly as soon as she finds out they share allergies.
Still enjoying the story and will be trying some of her other work.

good, but a little predictable

Narrator was good. it was nice having a short book like this to listen to on a long drive.

A great listen on a rainy afternoon. Well written and nicely narrated as well. Would recommend to others looking for a complete novella.