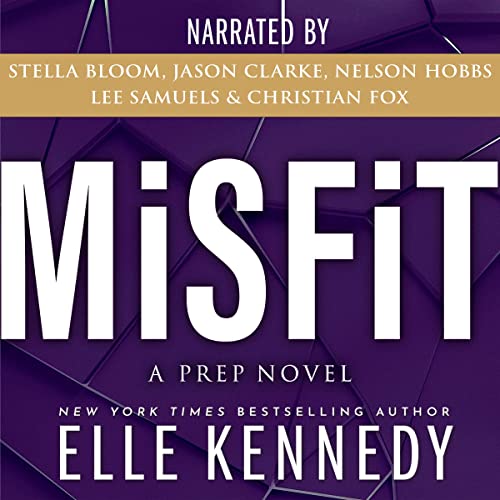 From New York Times and USA Today best-selling author Elle Kennedy comes an addictive new adult series set against the backdrop of an elite prep school where the only thing more dangerous than the powerful seniors who rule without consequences are the secrets they’re keeping.

Welcome to Sandover Prep, where the delinquents roam…and you can’t trust a soul.

Finding out your mom is marrying some rich guy you’ve never met is enough to make any 18-year-old’s head spin. And for RJ Shaw, it gets worse: He’s being sent to Sandover Prep for senior year. If there’s one place a misfit hacker like RJ doesn’t belong, it’s an ivy-covered all-boys boarding school for rich delinquents. There’s no point trying to get along with anyone. That is, until he meets Sloane Tresscott in the woods on the outskirts of campus. Gorgeous and sharp-tongued, Sloane is pure temptation. Except Sloane is the one girl he’s forbidden from touching.The headmaster’s daughter.

Good thing RJ doesn’t believe in rules. Sure, Sloane insists she’s swearing off boys this year, but he wants her bad, and he’s going to win her over if it kills him—unless her ex-boyfriend, the ruling king of Sandover, kills him first. Luckily, RJ’s unwittingly made some friends. His new stepbrother Fenn, a pretty boy with a self-destructive streak. Lawson, self-proclaimed agent of chaos. And Silas, the All-American good guy who can’t actually be as nice as he seems.

If RJ wants to survive prep school and win Sloane’s heart, he’ll need to find the secrets hidden in the walls of Sandover.

What listeners say about Misfit

Not the author’s best

Interesting story, but it’s not Kennedy’s best novel by a long shot. Also, I am not a fan of cliffhangers. Bloom’s narration was overly melodramatic and grating. Clarke was great and Hobbs was okay with their performances.

Great new start to a series!

Being a huge fan of Elle Kennedy, I was excited to hear she was writing another New Adult contemporary romance series, especially because her Off Campus and Briar U Series are some of my top favorites. Misfit, the first book in Elle Kennedy’s Prep Series, has a similar feel to those series, although it’s grittier, a bit more edgy, and the characters skew towards being morally grey.

Being shipped off to an expensive prep school that attracts troubled youth isn’t what RJ had in mind for his senior year of high school, but after his mom marries a rich guy, he finds himself at Sandover Prep alongside his new stepbrother, Fenn. RJ is out of place in this new world of wealth and power, but he finds himself forging his own path in the school’s underbelly, especially when it comes to Sloane, the headmaster’s gorgeous, and very much forbidden, daughter…

With a drama-filled narrative meant to shock and tantalize, and a cast of characters whose dubious morals are simultaneously jaw-dropping and entertaining, Misfit serves as a captivating introduction to the Prep Series. Several narrators are established as key players within the series, giving readers an idea of who and what is in store for future books. The narrative dangles a bit of mystery and intrigue to entice the reader to come back for more. If Rogue is anything like Misfit, we’re undoubtedly in for a wild ride!

In regards to the audiobook, I will say that I would've loved for there to have been more variation between the male's voices. I would've never guessed there were two male narrators. There are a LOT of male characters and it was often hard to distinguish between them because they all *sounded* the same. Other than that, it was great narration!

Elle Kennedy has done it again

Elle excels at young adult stories, and this one is no exception

I highly recommend this book. It’s entertaining, and the characters are well developed.

Why would u end a book like that? SMH. Other than that the book was very entertaining.

I hope I remember how awesome this is…

This was incredible in every aspect. The writing, the narration, and the editing.

I mention editing because nearly every book I listen to or read has multiple glaring errors that aren’t simple typos (e.g. “It wasn’t HOT enough for a fire but I lit one anyway."

But not Misfit. The audiobook was perfection, with no semantic errors interrupting my suspension of disbelief.

I only hope that my memory of how awesome the first book was holds up until March, 2023, when Book 2 (Rogue) is released.

I loved the three narrator twist and the multiple pov of this story. Elle Kennedy can suck me into stories like very few authors do. Jason Clarke, Stella Bloom and Nelson Hobbs have knocked this one out of the park. Can’t wait for book 2!

This is my first time with this author but I’m not disappointed! It was slightly sad hearing the past of these characters but not over done with it just more believable and real. It was funny and keep me invested. I literally didn’t put it down except to sleep. I will follow and listen to the next as they come out. It’s definitely one I will listen to again. I like how there was a little bit of of certain events that happened that sent the characters mad at each other but they always ended up figuring it out and these events weren’t drawn out to far just it was just enough!
I’m a sucker for good narration and picking narrators that can make it believable and there voices fit each character. Also this is the second author that had more then 2 POV’s and they did amazing. Good job author and narrators!! Definitely worth the credit

This was a book that kept me invested the entire time. I will continue reading this series. However I think it was a mistake not using different narrators for each different characters chapter. If I wasn’t paying attention to the name at the beginning of the chapter I was entirely lost.

This is more closer to YA than I was expecting. But it was still really good. I love Lawson and can’t wait till he gets a book.

Misfit was the audiobook selected by my book club for August. Narrated by Jason Clarke, Stella Bloom and Nelson Hobbs, this NA (borderline YA) prep school novel is full of drama and bad decisions. RJ is an unwilling prep school boy, who finds himself at rich kid reform school, when his mom gets married and he instantly has a step brother and room mate. Sloan is the headmaster's daughter and the person in her family responsible for her sister. RJ and Sloan shouldn't work, but it turns out they might be more similar than they think. One of my favorite parts of this book was that Sloan's favorite band was Sleater-Kinney. I love that angry girl rock music is getting some attention! The narration was good, Jason Clarke narrated several characters from their POV and it was challenging to distinguish between them, but his tone and inflection was enjoyable as always.

This is the start of a series and does end in a cliffhanger. This book took me a little to get into there are a lot of characters, and several of them have first person narration of their own chapters. The side characters having first person chapters has some benefit to the overall story, but I felt they were tangents to the plot of Misfit. I expect they have relevance to future books, but it felt like filler to make the story longer. I'm not sure if I will read additional books in this series, but I enjoyed my venture into the HS drama.

This prep school romance was intriguing, somewhat suspenseful and often times funny. The 5 different POVs took some getting used to. Especially because there wasn't a whole lot of difference in the voices the narrator did for the 3 men he voiced . But I was definitely invested in where the story was going.
Lawson is easily my favorite character and I'm hoping we get more from him in the next book.
And that ending!! Gah! I need the next book immediately.