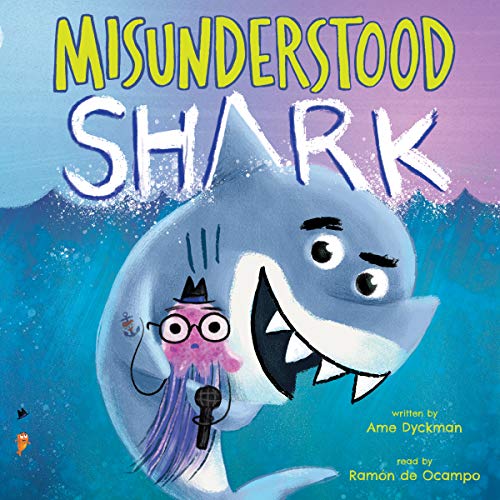 From best-selling author Ame Dyckman comes the laugh-out-loud story about a misunderstood shark who just wants to show the world who he really is....

Every beachgoer knows that there's nothing more terrifying than a...SHARRRK! But this shark is just misunderstood, or is he? In a wholly original, sidesplittingly funny story, New York Times best-selling author Ame Dyckman takes this perennial theme and turns it on its (hammer)head with a brand-new cheeky character.

The filming of an underwater TV show goes awry when the crew gets interrupted by a...SHARRRK! Poor Shark, he wasn't trying to scare them, he's just misunderstood! Then he's accused of trying to eat a fish. Will Shark ever catch a break? After all, he wasn't going to eat the fish, he was just showing it his new tooth! Or was he?

Explosively funny, extraordinarily clever, and even full of fun shark facts, this surprisingly endearing story gets to the heart of what it feels like to be misunderstood by the people around you. With a surprise twist ending, our Misunderstood Shark will have kids rolling with laughter!

As a nominee for the Vermont Red Clover Children's Book award, using this audible version with the picture book adds great excitement when reading to my students! Thanks for the wonderful performance Ramon de Ocampo. #vtvsla #vted