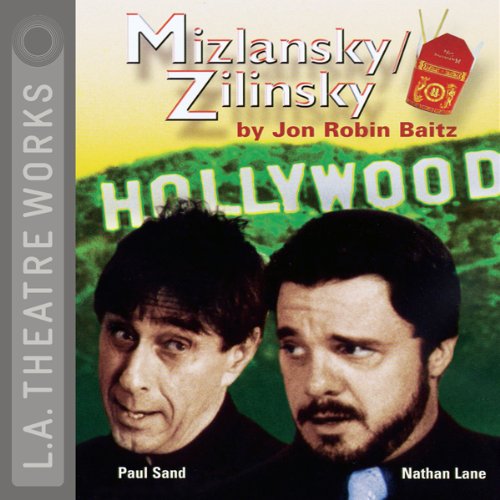 Italian shoes, a house in the hills, a gift for stretching the truth, and a petulant assistant to pick the scallions out of his Szechuan noodles - Hollywood producer Davis Mizlansky has it all. But he's about to lose it to the IRS unless he can pull off one more deal. A stellar cast performs this hilarious send-up of modern-day Hollywood.
©2007 L.A. Theatre Works (P)2007 L.A. Theatre Works

This Hollywood comic play was inspired by Mel Brooks's The Producers and taped with an outstanding cast in front of a live audience. To avoid the IRS, a movie producer/con man turns to recording salacious Bible stories for children on audiocassette. The hilariously over-the-top Nathan Lane stars. The script is so filled with inside jokes that even the studio audience responds only to a portion. Nonetheless, for those who are a) not in the biz, b) not resident in Los Angeles, and c) not Jewish - there are still plenty of laughs.

What listeners say about Mizlansky/Zilinsky

An odd and wonderful one-act, though peculiarly, if not intentionally, derivative. (Mild spoiler) Nathan Lane and a recalcitrant partner attempt to get rich off a scheme to produce a creative endeavor essentially intended to fail, with references along the way to anti-semitism, Hitler, and the Holocaust. Sound familiar? The “mark” is even named DeVries, echoing “De Bris” in The Producers. I’ve always suspected the title is a little pastiche of “Glengarry Glen Ross”, and certain slimy characters and intrigues here would seem to nicely fit such a reference. Everyone’s terrific in it, and, like the best writing for radio plays, everything you need to know is in the dialogue, and all exposition is naturally, elegantly delivered. Not a word would seem redundant in a visual production (and this is, indeed, an adaptation of the stage version for audio only) Love this show.