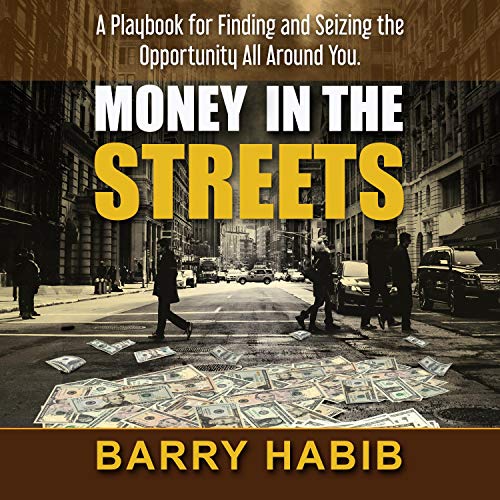 Money in the Streets is more than one man's journey in hard-knocks New York. It's more than the recounting of risking it all to win. Told with heart and laced with the sentiment of tremendous gratitude, Barry Habib deftly weaves tales of his upbringing to take the listener back in time. From his childhood, where he'd pick up the discarded toys of other children because he had so few of his own to play with, on into the sales world, where Habib got creative as a sort-of street vendor, Money in the Streets blends humor and hardship through the incredible moments of Habib's life. He wrote this book to answer a compulsion to share what worked for him as he scaled the ladder - creating multiple successful companies, growing into an international speaker, and frequenting major media networks, as well as producing various entertainment productions - most notably as the driving force and lead producer of one of the longest-running shows on Broadway (later made into a film): Rock of Ages.

Habib offers his life as proof that you can keep going no matter what. He shares some of his most painful memories while also exulting in personal and business triumphs to encourage everyone to aim for the same. An accessible book that will play on the listener's every emotion, this standout work and Habib's voice are unforgettable.

What listeners say about Money in the Streets

For years the mortgage industry has been blessed to guided by Barry when it comes to interest rates and economic insight. In this book though, we see a different side of Barry. One where gets very real with us on how he cultivated the many great relationships he has across multiple industries. We also see the driving force behind his ability to overcome challenges. Such a great read. I highly recommend this book.

I’ve seen Barry countless times as a mortgage professional, so I was super excited when his née book came out...even more so in audio format. His story is amazing and no one cuts through the clutter of finance & inspires personal success like Barry! Highly recommend.