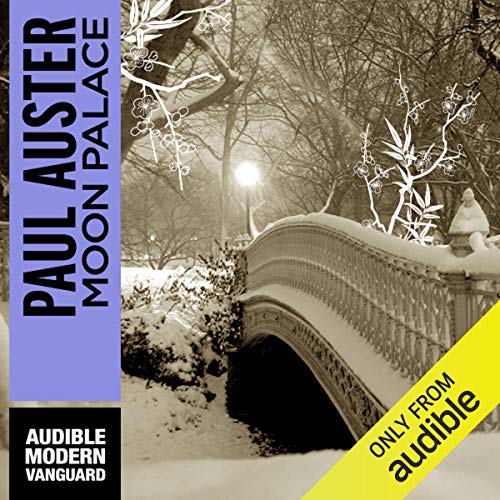 Marco Stanley Fogg is an orphan, a child of the '60s, a quester tirelessly seeking the key to his past, the answers to the ultimate riddle of his fate. As Marco journeys from the canyons of Manhattan to the deserts of Utah, he encounters a gallery of characters and a series of events as rich and surprising as any in modern fiction.

Beginning during the summer that men first walked on the moon, and moving backward and forward in time to span three generations, Moon Palace is propelled by coincidence and memory, and illuminated by marvelous flights of lyricism and wit. Here is the most entertaining and moving novel yet from an author well known for his breathtaking imagination.

As an added bonus, when you purchase our Audible Modern Vanguard production of Paul Auster's book, you'll also get an exclusive Jim Atlas interview that begins when the audiobook ends.

"This is a writer whose work shines with intelligence and originality." (Don Delillo)
"In somber, cerebral, and terse narratives, Paul Auster has hunted down his obsessions. The missing father, the limits of language, the past as a crime we are driven to solve: from these themes, Mr. Auster has built a reputation as a post-modern gumshoe, fusing the conventions of detective fiction with Beckett-like despair." (The New York Times)
"The moon as a poetic and planetary influence over earthly affairs runs as a theme, wittily ransacked, throughout this elegant fiction." (Publishers Weekly)

Only Auster should narrate Auster

A fantastic, captivating story, but it should not be narrated akin to a radio play. Only Auster should narrate Auster. I hope he gets to narrate Moon Palace. If so, I will definitly purchase it again.

I don't get it, I thoroughly enjoy it though.

It feels like an ode to storytelling itself. Each chapter is its own like individual colors of a mosaic. Beautiful and engaging

Would you listen to Moon Palace again? Why?

I have already listened to it three times, and never tire of it, so yes I would listen to it again

What other book might you compare Moon Palace to, and why?

I can't think of another book I'd compare it to. It's written in the style of a 'roman d'apprentisage', used by many of the classic nineteenth century novelists, but with the added elements Paul Auster finds interesting, in particular how chance affects our lives and decisions.

Which character – as performed by Joe Barrett – was your favourite?

Yea, but it was too long for that

Well, I have mentioned it is my favourite novel by Paul Auster. It has all the elements his novels are known for, but readers of his work will know that his later work is not very satisfying for many reasons. If someone asked me the best introduction to his work, I would say this one because for me it has stood the test of time, unlike his classic 'New York Trilogy', which I have as an audio book, but which I now find dated and tiresome.

First Paul Auster (I can't believe he passed me)

This is a beautiful book. The American novel at it's very best. Slow and steady, the narrative builds and the author engages and seduces. Don't expect fast food but expect a meal of exquisite proportions.

This was a very enjoyable listen for me. I was totally invested in the characters who were stunningly brought to life by Joe Barrett. Excellent.

as i remember it from years ago. a little to much of everything but beneath all words and action a,strong solitude greatness that grips even when reread.