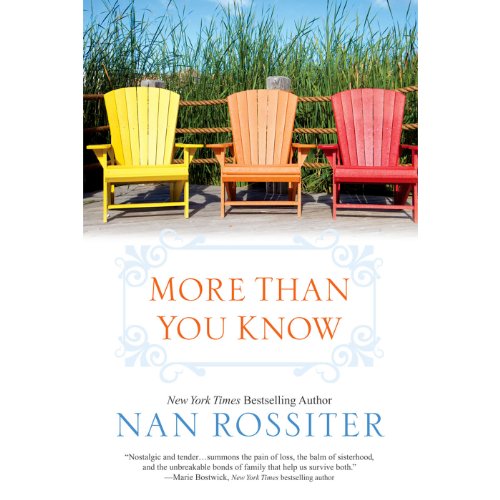 More Than You Know

Losing her father on the night she was born could have torn Beryl Graham's family apart. Instead, it knitted them together. Under their mother's steady guidance, Beryl and her older sisters, Isak and Rumer, shared a childhood filled with happiness. But now Mia Graham has passed away after battling Alzheimer's, and her three daughters return to their New Hampshire home to say goodbye.

Swept up in memories and funeral preparations, the sisters catch up on each other's lives. Rumer and Isak have both known recent heartache, while Beryl has given up hope of marriage. But surprising revelations abound, especially when they uncover Mia's handwritten memoir. In it are secrets they never guessed at - clandestine romance, passionate dreams, joy and guilt. And as Beryl, Rumer, and Isak face a future without her, they realize it's never too late to heed a mother's lessons -about taking chances, keeping faith, and loving in spite of the risks.

"Nostalgic and tender. . .summons the pain of loss, the balm of sisterhood, and the unbreakable bonds of family that help us survive both." (Marie Bostwick, New York Times best selling author)

What listeners say about More Than You Know

Bittersweet! A family of love! Hard to put down!

Would you listen to More Than You Know again? Why?

Yes! It's a beautiful yet exciting family story without one bad word!! The setting is beautiful and the three sisters are amazingly close!

What was one of the most memorable moments of More Than You Know?

Mia and Tom's Anniversary and the accident. The story of Mia's memoirs that lead to David. I loved Barrel and Micah's relationship. Definitely would like a sequel to this!!

What does Eileen Stevens bring to the story that you wouldn’t experience if you just read the book?

Ellen brings out the life of each character. It was soothing listening to her voice of each one.

I really did want to listen to this in one sitting. It seems often we don't get a beautiful family story and how people work to strive to keep family.

I was impressed with this book. It had a lot of love yet sadness which is life and how well they got through it. The sisters had such a beautiful relationship. Of course there was their deceased Mother"so secret that was found as they went through her things. Definitely could have a sequel!!