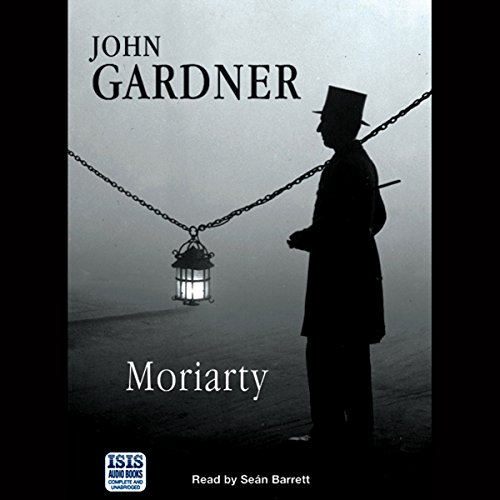 Forced to flee England and live in America during the 1890s, Professor James Moriarty - arch-enemy of Sherlock Holmes - returns to London in 1900 to find that his huge criminal empire has been infiltrated and plundered by the coming crime boss, Idle Jack Idell. As if this was not enough, he has evidence that one of his closest lieutenants, a member of the self-styled Praetorian Guard, is betraying him.

Trying to re-form his old family, tempting "straying sheep" back into his fold, he engineers a plan to assassinate Idle Jack. But nothing is ever as it seems, and when things go horribly wrong, Moriarty is faced with an even bigger problem.

John Gardner wrote three novels based around Professor Moriarty's subsequent career after surviving his encounter with Holmes at the Reichenbach Falls. I'd read and enjoyed "The Return of Moriarty" and was certainly not disappointed with this audio presentation of the third book in the series.
Gardner's portrays both Moriarty and the seedy and vicious London underworld of the Late Victorian era in gritty and believable style using real accounts of how the London criminals of the time operated and the slang they used to add verisimilitude.
The reading by Sean Barrett is excellent, good characterization and pace make this a cracking journey through the seamier side Victorian London.
I hope the other novels of the series will be available, preferably with Sean Barrett also reading.

Too much violence to allow me to listen to the end. Not what I expected.

I'd not read the other books in this mini-series, so I came to this one without prior knowledge or preconceptions. The author had certainly done an immense amount of research before writing this, and he seemed on occasion determined that we should admire this. The lashings of Victorian low-life slang on offer was sometimes more for effect than anything else. However, I enjoyed the plot and final twist, which seemed to set up sequels. That said, the 'End Game' was too short and made me wonder if I'd missed half a chapter. Certainly, Idle Jack's final appearance without an entourage rang untrue. Can't finish without noting the superb narration from Sean Barrett and the overall excellence of the recording quality.