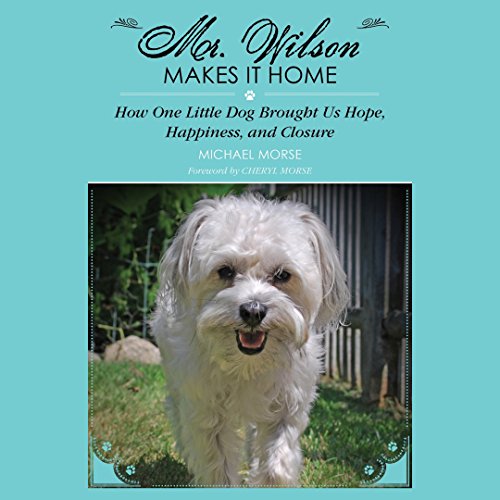 When Michael and Cheryl Morse slowly drifted apart amid an empty nest, her diagnosis of multiple sclerosis, his symptoms of PTSD, and the grief of losing their two beloved dogs put down on the same day three years prior, it became apparent their lives were in need of a little joy. Enter an energetic, white ball of fluff known as Mr. Wilson.

Mr. Wilson's story begins in Arkansas, where he was left in a leaky, drafty barn for days - the result of a child who couldn't care for him and a woman who wouldn't. An escape artist, he eventually found himself on a country road where he was discovered by a neighbor. Familiar with his current living conditions, she took him in, cleaned him up, and created an online adoption profile for him. In Rhode Island, Cheryl Morse clicked on Mr. Wilson's photo and instantly fell in love. A few days later, Mr. Wilson arrived in Rhode Island by a tractor trailer full of dogs needing homes. Upon meeting the Morses, he was happy, affectionate, and excited but how long would it last? Would they be able to care for him and themselves? Had he finally found his forever home? What if they had cats?

In Mr. Wilson Makes It Home, the joy Michael and Cheryl so badly needed comes in the form of an adorable schnoodle named Mr. Wilson. This animal rescue story tells of the love, recovery, faith, and hope that a pet can bring to a brokenhearted family.