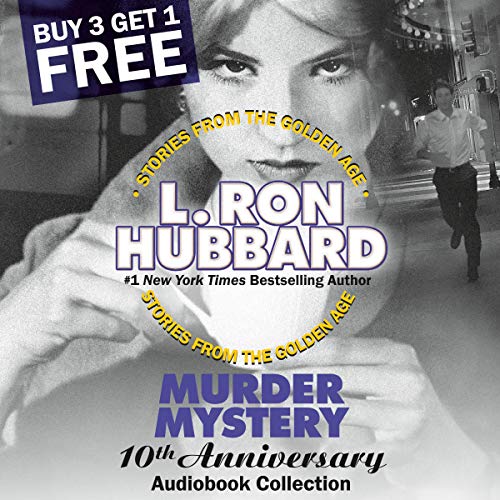 "This is escapism at its finest." (The Strand)

Written from firsthand experience with systematic research and the realities of forensic medicine, Ron crafted stories with accurate detail which injected authenticity into his detective fiction.

Here are 10 stories, in four volumes, fashioned with fast, vivid style that plunge the listener into the circle of danger within a maze of crime, always with the sense of reality that epitomizes L. Ron Hubbard’s fiction.

These state-of-the-art full-cast audiobooks are complete with music and sound effects - a “movie of the mind” experience.

Imagine that your father is one of New York City’s top gangsters, he’s been murdered...and you’re the only person who gives a damn. Meet Mat Lawrence, a stand-up guy who’s out for revenge. There’s even more at stake - when Mat’s old man went down, a million dollars went missing. Put it all together and one thing Mat is sure to find is some serious heat.

Also includes the short stories "Flame City", one man’s harrowing attempt to save his father and the city from a serial arsonist; "Calling Squad Cars!", in which a police dispatcher goes to extraordinary lengths to bring down a gang of bank robbers after he is accused of working with them; and "Grease Spot," a former race car driver, now the owner of a wrecking company, who plays fast and loose with the police...and may have to pay for it.

Tex Larimee, a grizzled sheriff, leaving the deserts of Arizona, behind and blazing a trail to New York. Robbed of his cash, gun and badge, and accused of murdering his best friend, Tex’s welcome to the city is a rude one. But he’s got a few tricks up his sleeve - and in his recovered Colt .45 - to make even the toughest of city birds sing a different tune. Strap on your six-gun and spurs and take a bite out of the Big Apple as The Slickers mixes up Wild West action with big city suspense.

Also includes the mysteries "Killer Ape", in which a man frees a mistreated orangutan, only to end up with a monkey on his back, as he’s accused of aiding and abetting the ape in a case of murder; and "Murder Afloat", the story of a top narcotics cop in the US Secret Service whose pursuit of a million-dollar score could land him in some hot - and deadly - water.