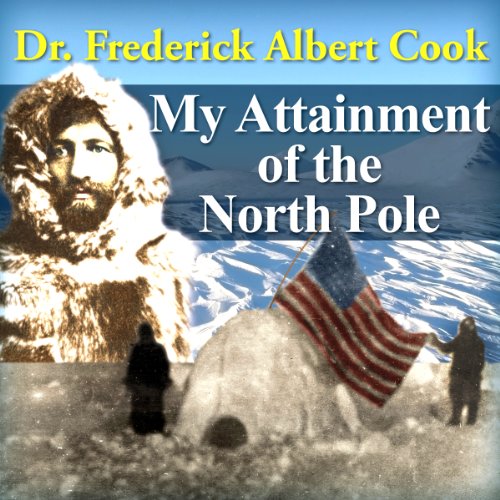 My Attainment of the North Pole

A wild epic journey by an American with two Inuit companions, struggling to be the first humans to reach the North Pole. After reaching the Pole, the struggle continued with a year-long, near death journey back to civilization, without supplies, competing with animals of the wild without defensive weapons, crossing a shifting sea of ice and struggling for life during the long winter night.

Listen as Dr. Frederick Albert Cook, a respected physician and experienced explorer, tells how he became the first man to reach the North Pole on April 21, 1908 and how, upon his return to civilization, he faced the wrath of a powerful, unbelieving rival determined to destroy his reputation.

What listeners say about My Attainment of the North Pole

who really made it to the north pole first

the main story is great but the is a lot of he said, he said which wasn't as good as the core of the book but I can see why it's in the book but I stopped listening with a few chapters left

the adventure to the north pole, I've listen to the all of the Antarctic books.

Has My Attainment of the North Pole turned you off from other books in this genre?

Who would you have cast as narrator instead of Andre Stojka?

Could you see My Attainment of the North Pole being made into a movie or a TV series? Who should the stars be?