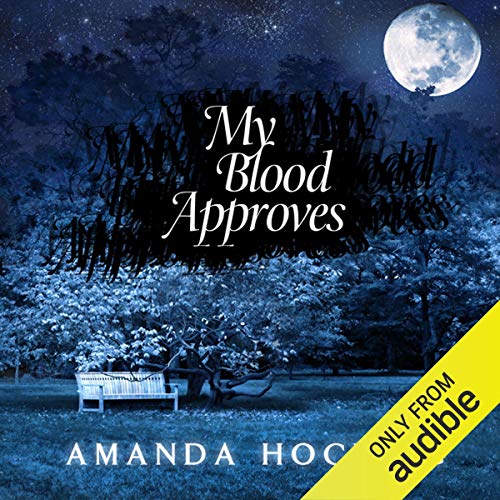 Seventeen-year-old Alice Bonham's life feels out of control after she meets Jack. With his fondness for pink Chuck Taylors and New Wave hits aside, Jack's unlike anyone she's ever met. Then she meets his brother, Peter. His eyes pierce through her, and she can barely breathe when he's around. Even though he can't stand the sight of her, she's drawn to him. But falling for two very different guys isn't even the worst of her problems. Jack and Peter are vampires, and Alice finds herself caught between love and her own blood....

What listeners say about My Blood Approves

I JUST FINISHED THE AVAILIBLE BOOKS IN THS SERIES AND I HAVE TO SAY I WAS A BIT ANNOYED WITH I STARTED LISTENING TO THIS BOOK. I NEVER REALLY EXPECT THE FIRST BOOK IN A SERIES TO BE THE BEST BUT I WAS ALMOST REALLY DISAPOINTED BECAUSE I JUST REMINDED ME OF THE TWILIGHT BOOK. IT WAS PROBABLY THE AUTHORS BIGGEST INFLUENCE AND IT REALLY SHOWS. BUT... THE STORY IS REALLY GOOD AND THE AUTHORS DID DO A GREAT JOB ON THE SERIES SO IT IS WORTH LISTENING TO AND GETTING T NEXT BOOK.

This is by far the worst book I ever listened to. I don't think anything would make this book
Worth listening

Has My Blood Approves turned you off from other books in this genre?

Narator was too slow

If you could play editor, what scene or scenes would you have cut from My Blood Approves?

Oh god, every one

I usually don't write bad comments but this time I had to. If you value your credits or your money stay away from this one. Honestly, bad writing, ridiculous dialogue, immortal people who act dumber than teenagers and most of all the stupidest main character.

My Blood Approves - But my Brain does not

I feel like a few brain cells died, flinging themselves over a cliff just to escape this horrid nonsense. I'd give it all 1 star if it weren't YA but even then I feel like teenagers are being cheated. Simply put, this is Twilight watered down.

No plot, no endgame (at least where I'm at just before the start of Part 2), Alice is a shallow, self-absorbed, 17-year-old idiot who has clearly never heard the word vampire despite throwing up werewolf as an excuse for Jack's strange behavior. Her only friend is a slut (no really, the girl does nothing but go out, get drunk, and have one-night stands), she hardly gives a thought to her mother who's apparently working 70 hours a week, and her brother is a shadow of a character. She gets saved from being attacked and immediately gets in the car with a complete stranger who is 25 who focuses all his attention on her because "there's just something about her that's different from other girls." He does all these weird things and she just keeps going with the flow while having midless drivel float through her brain for us readers to see how truely clueless she is. Ugh.

The narration is fair at best and mediocre most of the time, but then, it fits the story just perfect.

Twilight - all is forgiven

This book has a Twilight-esque storyline, in as much there is a schoolgirl with little sense, self preservation wise or otherwise, who becomes involved with a vampire 'family'.

Unlike Bella, Sally is a self centered person who appears to care little to nothing for her single parent mother who works hard to keep her and her brother in a relatively good and safe home environment.

Sally appears to care a bit more for her younger bother when it suits her. This care however does not stop her from leaving him home alone and even leaving home for no other reason that her mother chastised her for coming home just as the sun was rising on a school day.

There is little to like about Sally as a person in this book in my opinion.

There is a few nice twists to vampire lore in this story and some of the vampire families back stories are nicely detailed.

The narrator does a passable job.

So if you are into Twilight-esque novels this may appeal. Be warned however the books ending leaves a lot to be desired as it resolve very little. One hopes the next book in the series with at least do that.

okay once it gets going

This book ends up being okay, but the character and story-line development takes a good half of the book, leaving only the last third of the book to actually be good. The book takes place in only a couple of weeks, but a lot and yet very little occur in that time frame. The main female character is not a strong character, and it takes very little to get her attention. You end up understanding that her strong attraction to the male character is something entirely different than you initially think, but it doesn't improve her weakness. The narrator is pretty horrible, very choppy and slow, but oddly enough she has a rhythm that you can eventually get in with and not annoy so much. And thankfully, my MP3 player has a fast playback feature for audiobooks. So overall, this is an okay listen, just okay enough that I will give the second book a try.

A Worthy Effort In This Trendy Genre

Would you consider the audio edition of My Blood Approves to be better than the print version?

I think I liked the more varied and intimate interactions with the vampires, in fact between all the characters, throughout the story, partially allowed by the protagonist, Alice's few positive human relationships and because the author seemed genuinely interested in exploring the humanity of her vampire characters.

Would you be willing to try another one of Hannah Friedman’s performances?

I believe I will read the entire series, as the story seems incomplete after this first book in the series. The narration was not the best.

I was particularly moved by the antagonist, blood-lust filled Peter's attack on Alice in the kitchen. This is when Jack's feelings for her become clear, not just to her, but to all the characters present as he defends her against the stronger, more vicious Peter's cruel actions.

Well worth the read! Recommended.

What disappointed you about My Blood Approves?

The storyline was disappointing. I guess if you want a combination of The Vampire Diaries and Twilight but not done well, this book is it!

Have you listened to any of Hannah Friedman’s other performances before? How does this one compare?

No, but she did well.

I really enjoyed this book and couldn't wait to download the second in the series..I could relate to the characters as if they were friends of mine. I hope the second book is just as good as the first.

Reading this was better than listening

I actually liked the book better when I read it. It took forever to get to the point, but once it did it was good. The narrator, not so good. She took forever like she was trying to drag the story out as long as possible. Almost as if she was reading one word per page. Or as if she'd never read it before and was looking back over the words before she said another sentence. It was pretty awful. The only reason I gave a 4 star overall and story is because it was better than the narration. If you're interested in this book I would suggest you read it instead of listening to it.

What made the experience of listening to My Blood Approves the most enjoyable?

The story kept a great pace

I liked the reality of it, I know vampires are not real, but I liked that Hocking protrayed them as "not so perfect" as well as the human characters. If there are vampires in the world I think they would be pretty close to what the characters are in these books

What does Hannah Friedman bring to the story that you wouldn’t experience if you just read the book?

I great book to listen to: I actually had to run my ipod OFF so i could sleep instead of keeping myself awake just to hear the next part. however, if you're looking for something unique, this isn't it. Its so reminiscent of Twilight that i can't believe its not copyright infringement and if i heard the word "complicated" one more time i was going to shred my earphones. BUT it's fun to listen to and slightly more satisfying because its set for a older audience (albeit only by a smidgen). I'd have given it a 5 if it hadn't already all been said and done.