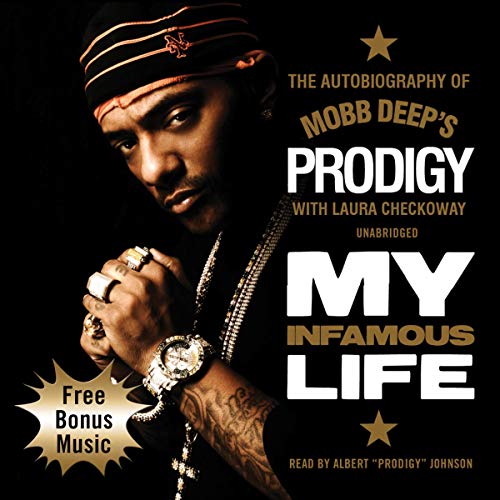 From one of the greatest rappers of all time, the memoir of a life cut short, a revealing look at the dark side of hip hop’s Golden Era....

In this often violent but always introspective memoir, Mobb Deep’s Prodigy tells his much anticipated story of struggle, survival, and hope down the mean streets of New York City. For the first time, he gives an intimate look at his family background, his battles with drugs, his life of crime, his relentless suffering with sickle-cell anemia, and much more. Recently released after serving three and a half years in state prison due to what many consider an unlawful arrest by a rumored secret NYPD hip hop task force, Prodigy is ready to talk about his life as one of rap’s greatest legends.

My Infamous Life is an unblinking account of Prodigy’s wild times with Mobb Deep, who, alongside rappers like Nas, The Notorious B.I.G., Tupac Shakur, Jay-Z, and Wu-Tang Clan, changed the musical landscape with their vivid portrayals of early ’90s street life. It is a firsthand chronicle of legendary rap feuds like the East Coast-West Coast rivalry; Prodigy’s beefs with Jay-Z, Nas, Snoop Dogg, Ja Rule, and Capone-N-Noreaga; and run-ins with prodigal hit makers and managers like Puff Daddy, Russell Simmons, Chris Lighty, Irv Gotti, and Lyor Cohen.

Taking the listener behind the smoke-and-mirrors glamour of the hip hop world, so often seen as the only way out for those with few options, Prodigy lays down the truth about the intoxicating power of money, the meaning of true friendship and loyalty, and the ultimately redemptive power of self. This is the heartbreaking journey of a child born in privilege, his youth spent among music royalty like Diana Ross and Dizzy Gillespie, educated in private schools, until a family tragedy changed everything. Raised in the mayhem of the Queensbridge projects, Prodigy rose to the dizzying heights of fame and eventually fell into the darkness of a prison cell.

A truly candid memoir, part fearless confessional and part ode to the concrete jungles of New York City, from the front line of the last great moment in hip hop history.

What listeners say about My Infamous Life

Its a shame that hip hop is where it is right now... this book is proof that real hip hop comes from hard work and suffering... with this audio book, it's like having prodigy with us forever... RIP Prodigy... my favorite rapper!

I like to hear his truth. He didnt hold any punches. Mad me more aware of Sickle cell anemia. I never knew anything about this disease. Pure, uncut and raw!

This is definitely the most raw autobiography from a rapper ever! I loved it. Prodigy does a great job of connecting all of the rappers from the 90s in his story

Loved this book from start to finish. Have a copy of it, decided to hear it from his mouth for a better experience. Deff will give it a read.

FINALLY was able to get this R.I.P PRODIGY🎤

I've been wanting to own a copy & listen to the audio version of this book for years. Finally it just popped up one day & it was just as great as I hoped.

It's sad knowing he's no longer here but that makes me that much more grateful for this gem, this is a piece of Hiphop history.

All our geniuses leave too soon. Hiphop loves you P & we miss ya, R.I.P. 🤘

one of the greatest to ever do it, this book proves why prodigy is amongst my top 5 his autobio is greatly appreciated and I love the fact that prodigy himself is the reader. I recommend all hip hop heads to read or listen to this book.

Everything about this autobiography was absolutely amazing! From the performance to the story to the genuine realness simply awesome!! Being a 70s baby and a true hip-hop and more deep sand Facebook put me back in time and I love every moment of it. Hearing about Dr. Francis who was also My pediatrician when we lived in Jamaica Queens to hearing about the Sickle cell pain that my mother shares with Prodigy. The grittiness, the honesty and the true calling on Prodigy’s life is all summed up perfectly. MUST READ!!!

Great book, big part of the rap history , great to hear it read by prodigy himself

Rhyme in peace Prodigy. What a life story. When your albums become chapters of your life & your verses are epigraphs. P exemplified the art of eMCeeing and like the greats that he shared the world's ear with had us all listening to his speaker on his door step.

Always been a M.O.B.B. Fan but this book made me into an even bigger fan. Great read, even better narration from prodigy himself. Being an NYC native, I loved that prodigy didn’t sophisticate his accent and pronunciation. RIP P.

absolutely poor, poor delivery, poor sound effects. this should never have made the light of day.

It was so good to listen to his progress, growth, pain, good times, bad times. He is one my idol🥺

A masterpiece. Seriously brilliant. Has changed and inspired my life. RIP King P QB until the end of time

Very good and interesting read. RIP to one of the most underrated kings of NY.

Enjoyed the book, although it seems like Prodigy was trapped in a vicious circle. I actually travelled to the places and experiences he faced. Also love the many encounters with different celebrities funny and sad stories. I didn't took anything away from this book sadly. But I enjoyed the stories

Great insight to Prodigys life and he is also a good narrator. As a fan of his music I found a great listen.

great story from start to finish a real eye opener , goes in detail about situations that happend prodigy is a real one . rip.