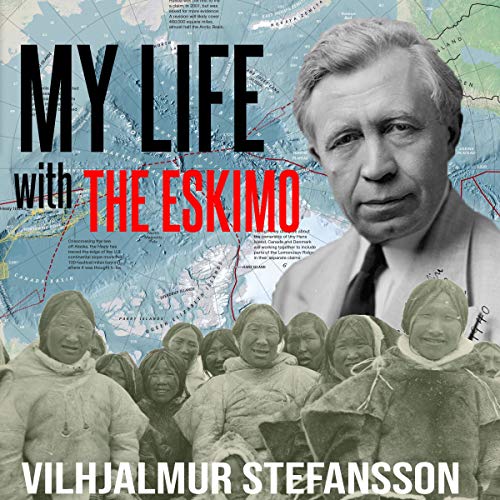 Who are the Eskimo peoples? And how do they survive in the freezing conditions of the far north?

Vilhjálmur Stefánsson left New York in April 1908 to begin his journey northwards and into the Arctic Circle. For the next two years, he made his way northwards to Victoria Island to study an isolated group of Inuit who still used primitive tools and had strong Caucasian features, and whom some believed were descended from Vikings. The journey into these remote areas was incredibly tough and being delayed by blizzards Stefánsson, along with his companions, were forced to eat the tongue of a beached whale that had been dead for at least four years.

Stefánsson, who learnt how to communicate with the Inuit, provides fascinating insight into the beliefs and every day life of these people.

“The book is full of psychologic and human interest, and of clear-cut observation of many different kinds.” (The North American Review)

“This book contains a wealth of ethnological and biological information … this is a valuable contribution to the scientific study of the Eskimos, by one who knows them thoroughly.” (The Literary Digest)

“It is impossible to analyze with certainty the amalgam of motives underlying the ceaseless movement of northern exploration, but the lure of the difficult and the dangerous can hardly be less active than the desire to enlarge bounds of human knowledge.” (The Nation)

This book is essential reading for anyone interested in this remarkable expedition and for people who want to find out more about life of people in the far north prior to the advent of modern technology. Vilhjálmur Stefánsson was a Canadian Artic explorer and ethnologist. Under the auspices of the American Museum of Natural History, New York, he and Dr. R.M. Anderson undertook the ethnological survey of the Central Arctic coasts of the shores of North America from 1908 to 1912. The results of this expedition were My Life with the Eskimo first published in 1913. Stefánsson passed away in 1962.

What listeners say about My Life with the Eskimo