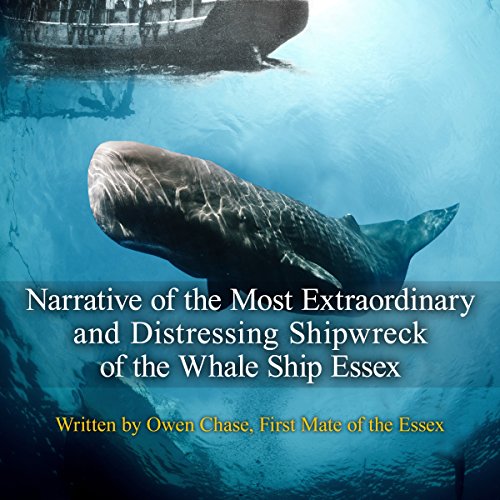 "I saw the whale ahead of us, coming with twice his ordinary speed, and with tenfold fury and vengeance in his aspect. The surf flew in all directions about him and his course toward us was marked by a white foam which he made with continual violent thrashing of his tail; his head was about half out of water and in that way he came upon and again struck the ship."

An angry whale rams and destroys a whale ship in 1820. The helpless crew stranded 1500 miles from land struggles in a desperate journey for survival fighting storms at sea, the relentless sun, lack of water, and a dwindling food supply. This is a recording of the original book published in 1821, which influenced author Herman Melville and his novel Moby Dick.

Note to listeners: the end of this narrative describes cannibalism, and may disturb some persons.

Very engaging reading and a narrative so different to our modern discomforts as to make me wonder how might I or others I know managed through such an ordeal...

it may not be a five star book (like Moby dick or #middlemarch) but it would be a shame to cause someone to over look due to mediocre rate.

the book is short and straight to the point. a memoir of a fateful voyage.

the compelling part is not the prose but the story. what they went through... what happened along the way... it's amazing. and to consider the technology of the time, it's almost unbelievable they survived. it may have been terrifying.

really the worst part of the book is the prose. it is dry and blunt. it is a shame that the author was not a fancy lyricists that could bring the eloquence to the situation. however a poet would probably not have been first mate and possibly not survived.

The matter-of-fact style of the prose is undercut by an unbecoming, and in the words of the book itself, unmanly tone of selv pity. The sound effects are more of a disturbance than an asset.

What made the experience of listening to Narrative of the Most Extraordinary and Distressing Shipwreck of the Whaleship Essex the most enjoyable?

I cannot imagine a better reader than Mr. Stojka. His understated but thoughtful performance was pitch-perfect.

What other book might you compare Narrative of the Most Extraordinary and Distressing Shipwreck of the Whaleship Essex to and why?

If you are reading or have read Moby-Dick, then you must read the source material, which is this.

Hoping to enjoy more of Mr. Stojka's subtle work in the future.