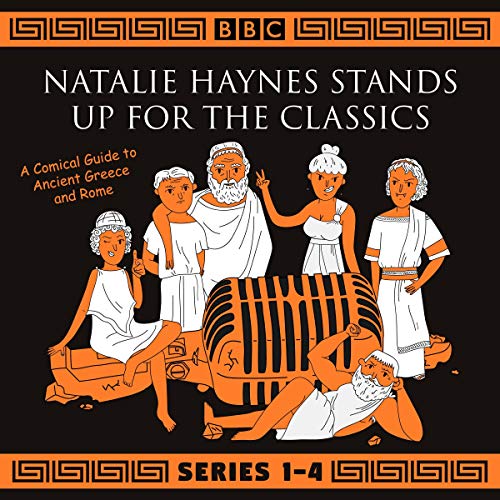 Natalie Haynes Stands Up for the Classics: Series 1-4

Writer, broadcaster and recovering comedian Natalie Haynes mixes comedy and conversation to bring the ancient world entertainingly up to date in these four radio series. Each episode sees her profiling a key figure from ancient Greece and Rome, and, aided by her special guests, creating a stand-up show around them.

Series 1 investigates Petronius and the worst dinner party in history; asks whether Sophocles invented the TV detective with Oedipus; explains how Virgil was responsible for Buffy the Vampire Slayer; and introduces us to the notorious Aspasia.

In Series 2, Natalie stands up for Aristophanes (expect a chorus of frogs and a sex strike); Ovid (featuring frottage at the races); Plato (a bit chunky, but a good wrestler) and Agrippina (pretty well connected and handy with the purse strings).

Series 3 discusses Sappho, whose scorching poetry is now mainly lost; brings us some thousand-year-old gossip about Cicero; gives us the lowdown on Lucian, the forgotten inventor of science fiction; and tells the story of Juvenal, history’s first great stand-up comedian.

Finally, Series 4 explores Phryne, the Greek courtesan famed for her wit and beauty; Horace, the Roman poet who made friends of enemies through his writing; Euripides, whose Medea still shocks us today; and Livy, who gave us Hannibal crossing the Alps and the inspiration for Shakespeare’s Coriolanus.

Love the subjects picked and the balanced view of the ‘tricky’ ones (Juvenal, Ovid).

For future performances, it would be nice if the author / performer slowed down just a little in delivery. Also, she has an ‘uplift’ vocal pattern that starts to grate a bit in some episodes.

Overall, the episodes didn’t just entertain and educate me - they also motivated me to delve further into Greek drama. Oh! And it was stonkingly lovely to hear someone who started studying Latin with the same program that I did.

History with modern references and comedy

History with modern references and comedy - a great approach to biography of the ancient world.

Having always enjoyed learning about these periods, and having enjoyed Haynes' book 'An Ancient Guide to Modern Life', this sounded like a pleasant way to learn more about key figures.

Haynes covers sixteen figures from the ancient world in episodes, with each discussed in terms of their lives, their works, quotes and achievements, in the context of their times. And she does it by effortlessly interweaving modern references, comparing the work sometimes to Poirot, to Sherlock Holmes, to Buffy the Vampire Slayer and science fiction. And it's all there - it seems almost obvious as she shows us the forerunners of modern cultural literature.

I had heard of most of the subjects, some I knew a little about, some nothing at all. And I was pleased to hear about female writers as well. Each felt quite 'bitty' though, though this is a side-effect of being a radio broadcast and not an academic lecture series - there just isn't time to cover a subject in such depth. And it is surely up to the interested listener to research further in their own time.

Each episode is pulled together from smaller segments it seems, there is editing that could mean one longer show is edited down, and guests add their own expertise on the persons covered (comedians, academics, writers).

I enjoyed hearing the Latin words these writers gave us (having never studied a word of the language) and the beautiful pithy translations we have from them. Beautiful.

Personally, I'll be honest and say that Haynes' sense of humour and the audience (or laugh track?) didn't hit the spot for me, I found her jokes almost universally a little weak (sorry!!! Just not very funny in my opinion, though I do hate canned laughter), but I was highly impressed with the content otherwise.

It's one I would want to listen to a second time to keep the details in my head, listening to this kind of talk means there is too much to take in. Quotes and extracts are helpful to see on a page. Haynes herself is a skilled speaker, clear and easy to follow.

Excellent introduction to important figures of the ancient world. Would love to learn more.

With thanks to Nudge Books for providing a sample Audible copy.

Love everything about this except how slapdash and uncurated the menu is. It's not possible to see the chapters by subject, only by number. Natalie Haynes and her guests are educational and fascinating. Lazy presentation of the content is a real downer.

love everything about this audio book

Funny & informative. Have listened to this one again & again. Love everything about it!

I knew about about classics but this is a lovely and interesting introduction. Her enthusiasm is contagious.

The Classics, without the dry boring stuff

Natalie Haynes is entertaining, interesting, knowledgeable and very funny! She brings ancient history to life in a way few people can. Loved it. More please!

a fantastic funny look at the stories we may know

Haynes makes the classes engaging and fun as she looks at the figures from history that we know, think we know and those we know nothing about. truly enjoyable, didn't want it to end.

Not What I Thought It Would Be

I pre ordered this for a long journey, but gave up half way through first episode. Not all stand up comedy. Also, she speaks very quickly on stage.