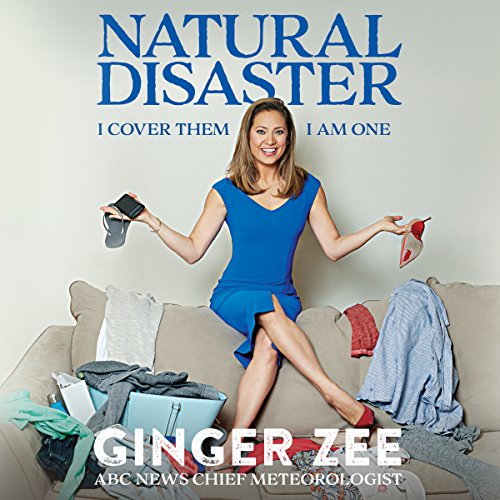 Before becoming America's first-ever female network chief meteorologist or appearing on Dancing with the Stars, ABC News's Ginger Zee checked herself into a mental health hospital.

Natural Disaster: I Cover Them. I Am One. is Ginger's heartbreaking, hilarious, and harshly honest life story - from Dickhead's (you won't soon forget that name) deck on Lake Michigan to her storm-chasing dream at ABC News.

Ginger opens up about her lifelong battle with crippling depression, her romances that ranged from misguided to dangerous, and her tumultuous professional path. This cyclone of stories may sound familiar to some - it's just that Ginger's personal tempests happened while she was covering some of the most devastating storms in recent history, including a ferocious tornado that killed a legend in the meteorology field.

She also canceled her first wedding - twice - because she finally listened to her inner voice, which was saying, This isn't right, but then she happened to fall in love with her gay best friend. Yes, twice. Yes, gay.

On the sunny side, this book is for all the mistake makers who have learned to forgive others and themselves - even in the aftermath of man-made, or in this case Ginger-made, disasters. It's a story that every young woman should read, a story about finding love in the world and finding it in yourself.

Beloved by Good Morning America's audience, Ginger is a daily presence for millions. She's gained fame for her social media presence, which is as unfiltered as Natural Disaster - from baby barf to doggy doo-doo. She's shattered the glass ceiling for women in meteorology but admits here first she's the one natural disaster she couldn't have forecast.

I felt like I was listening to someone reading their journal -hard to hold my interest. Thought it would have more insight into her depression but it didn’t - she read so fast and lacked emotion

This is about Depression?

Ginger is a good storyteller and her rise to success is a good read. But her premise that she wants to help people with depression through the telling of her story dealing with it is misleading.
She glosses over her attempted suicide and admission to an inpatient psych facility as if they were just two of many exciting events she covered for the news. There is no depth, no feeling or emotion and certainly no insight for anyone else to learn from.

Great story, but holy cow does she speak quickly!
It’s almost exhausting to listen to.

Way to go Ginger Zee! I loved listening to this book on my commute to and from work for the last few weeks, that I'm going to go through withdrawals not hearing your voice and stories everyday! I enjoyed your humor, your experiences, and your down to earth, very real, life. I also loved how you shared how you handled the negativity others tried to throw on you and how you handled it and continue to handle. I read this book because I'm a fan of yours, but as a supervisor in a public organization, your input on how to handle and respond to the negative people was fantastic and something I plan on trying out myself. Thank you for sharing! Write more! Best wishes!!

I've read better but I enjoyed it.

I always liked Ginger. She has this gentle disposition that makes you feel right at home. Reading about her life taught me something new for sure. It is good to know about TV from the inside. You can listen it to it if you want to be entertained while driving or something like that.

Ginger Zee is Genuine and inspiring.

Well worth the purchase, you will love it! So many emotions Ginger Zee is inspiring.

You may be a fan of Ginger Zee, her professionalism, meteorological knowledge, positive attitude or the “never say no” mindset that we all secretly yearn in for life, but this book is more than smiling Ginger. I think there are some aspects of Ginger’s “natural disaster” life that are in all of us. We all have those moments that make us cringe. Ginger helps us see that all cringe worthy moments are life lessons. They are roadblocks that are meant to direct us down the right path or mistaje that are nothing more than just mistakes. Thank you Ginger for taking us, the reader along On your journey. I hope everybody can take a step back, re-examine some of our own natural disasters and be as positive as Ginger. Most importantly, when you finish this book you’ll look at those closed doors that are in front of you and be excited to turn the door knob

It feels as if Ginger is sitting on the sofa candidly sharing some of the most challenging times of her life with the listener. Her strength comes from her vulnerability. She is courageous and infectious and has a great deal to teach others about relationships, career choices and most importantly self-love. An inspiration to so many!

One of my new favorite books!

"Natural Disaster" by Ginger Zee is a breath of fresh air and a powerful story of overcoming adversity. Ginger's writing style is energetic, fun and full of personality. Memoir can be a tough genre, as the fellow author of "Wide Awake and Dreaming: A Memoir of Narcolepsy" -- I've struggled with "medical/mental illness memoirs" myself. This book is different.

Ginger strikes the PERFECT balance of honesty and inspiration. She candidly shares her challenges with saying no, with finding healthy relationships, with living with depression and narcolepsy, etc. Yet she takes responsibility and control of her destiny and bravely advanced her personal and professional life. I recently read Andrea Duckworth's "GRIT" and Ginger Zee 100% exemplifies the passion and perseverance principles described in GRIT!

Congratulations and thank you, Ginger! As a fellow woman with narcolepsy and author, you are an inspiration and role model to so many, myself included. Thank you for embodying Project Sleep's awareness campaign slogan: NARCOLEPSY: NOT ALONE! On my blog, the footer reads: "Chase your dreams or they'll chase you." Reading your book, I think that's exactly what you've done and I'm forever grateful.

My life in Ginger’s eyes...kind of

My life parallels Ginger’s life in so many ways! Thank you Ginger for letting me know we can be a natural disaster but still a successful persons. From the always moving childhood, to the refuse to be in my own adulthood, to the days upon days in a mental hospital, to bring me any idea of adventure I am fearless: I could relate. I haven’t found my perfect happiness but my drive to accomplish goals will get me there. My struggles with whether I belong in this earth or with my God in Heaven will undoubtably always remain. Thank you for your story! May God bless you and Keto you safe!