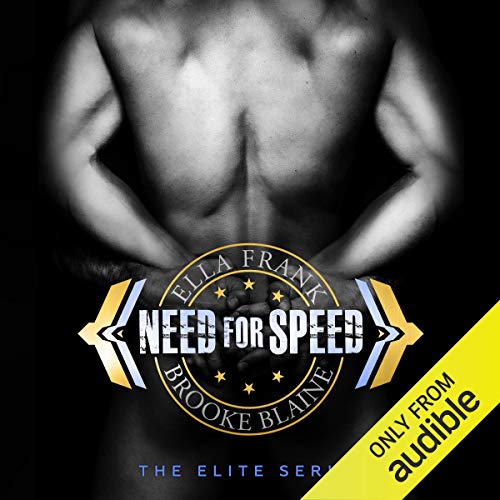 Need for Speed is the continuation of Solo and Panther’s story and should only be heard after book one, Danger Zone.

They train to serve their country.
They strive to be the best.
But only a select few can be....
The Elite

Reckless, arrogant, and bold, Solo is as known in the US Navy for his bad-boy reputation as he is for his skills as a fighter pilot. It’s a surprise to his peers, then, when he’s chosen to train and compete at the most prestigious naval aviation academy in the world.

Mission Rules:
1. Kick everyone’s ass.
2. Do whatever it takes to win.
3. Do your best to distract the competition.
4. Especially when that competition is a gorgeous blue-eyed perfectionist who makes your blood run hot.

Disciplined, smart, and confident, Panther can’t afford not to play by the rules. As the son of a top Navy commander, all eyes are on him, and being anything less than number one is unacceptable.

Mission Rules:
1. Keep it safe in the air.
2. Prove you’re more than Commander Hughes’s son.
3. No distractions. Stay focused.
4. Don’t fall for your competition - especially not the rebellious heartbreaker with lips made for sinning.

In the heat of the hot California sun, tempers flare and desires ignite as Solo and Panther try to resist their attraction while fighting to be number one.

With passion this intense, the question remains: Who’s gonna come out on top?

What listeners say about Need for Speed

Audiobook review by Mel 4.5 Blue Roses 4 Blue flames Dual Narrators Aiden Snow and Christian Fox successfully delivered one of the sexiest series of the year. Everyone knows my Aiden is the best, but coupled with Christian Fox, the pair produced one hell of a ride, or should I say flight? Both these men have a deep and smooth timbre in their voices, which are ideally suited for the testosterone-filled airforce trainee fighter pilot series. They complimented each other and were able to pick up and run with the tension bouncing back and forth. It was magic! They are absolutely a winning combination. The Series itself is tribute or fanfare to “Top Gun” the movie. Man, could I visualize how the flights went? How they took flight into the air and how the protagonists experienced the velocity and strength of the jets. I watched that movie as a child many-many times. Loving the sexy men in their uniforms and aviator sunglasses, jets, motorbikes, and the speed, and this exactly what the plot is all about. Panther and Solo are both alpha male personalities. Thanks to the excellent narration, they have stolen my heart and now I am obsessed. They are all kinds of sexy and the chemistry between the two of them is smoldering hot. They have a love-hate relationship in the beginning, which quickly grows into banter and then mutual respect. As for the cliffhangers… I would recommend waiting until all three are available on audio. It’s actually one story chopped up in three pieces. This is why I never want to listen to short, audiobooks. It’s quite irritating, imagine, going to the movies and halfway through they stop the movie, tell you to go home and come back in three months to watch the rest. But, I was such an eager beaver to hear my Aiden, I could not click-buy-listen fast enough. Happy Listening

The heart is getting deeper in this!

The second story in this series, your heart will definitely feel more. Panther and Solo can no longer deny their attraction. But they need to keep it hidden on base and from Panther's parents. This isn't always easy, especially after Panther is injured in flight. Small cliffhanger at the end, awaiting book three Cliffhanger did not take from the story - really just introduces the next act nicely. Excellent Narration by both Aiden Snow and Christian Fox.

I absolutely loved this series when I read it, so it was a must for me in audio. These were new to me narrators with starting this series, and they’ve continued to blow me away with their narration of the Elite series. Holy hotness they’ve continued to keep the chemistry going for me. Christian Fox and Aiden Snow did an amazing job bringing Panther and Solo’s story to life for me. They were both so growly and perfect! After a super exciting cliffhanger in book one left me hanging on for more, the second book throws you right back into the action with Panther and Solo. The steam between these two continues to generate as they navigate their new feelings. Holy hotness is the chemistry between these two off the Scoville charts! I’m totally hooked and I can’t wait to see what unfolds for Panther and Solo. The ending in this one left me saying “but, but..wait...I NEED more!!!”

Need for Speed The Elite, Book 2 By: Brooke Blaine, Ella Frank Narrated by: Aiden Snow, Christian Fox Series: The Elite, Book 2 Length: 4 hrs and 8 mins I listened to this book at 1.40 x copied from my book 1 review because it was worth the same review. If Top Gun was an M/M romance it would be this book. Ok story line, cliffhanger, not a bad plot I love all the books from Ella Frank (50+) and Brook Blaine (12+) that I have read/listened to, most are 5 star and higher if possible. But sorry to say this just made a 4 star at best. Aiden Snow, and Christian Fox always do a great job.

After the cliffhanger ending of the first book, Panther and Solo become closer and finally give in to their attraction to each other especially as Solo helps take care of Panther. Since Panther is not out, they hide their relationship which is ultimately put to the test when are required to attend the Navy Ball. Though this book ends on a cliffhanger it did not deter from the story. The narration by Aiden Snow and Christian Fox is oh so sexy and excellent.

Honestly, there isn't much I can see apart from the fact that I am completely and utterly in love with Panther and Solo's story. These men, this world, the plot,... It's such an effortless an gripping series so far. The narrators lift this to an even higher level of deliciousness and I'm here for more! I can't seem to get enough of them.

The narrator's fur this series are fantastic. I got shivers down my back listening to this one.

First off. This story is beautiful and so very well written. Every emotion you can have you’ll get while reading/listening. I’m hoping to see a third book to this series. Please please please

someone needs to make this into a movie loved every minute of it. I would cast Henry Cavil as Panther and Zack Effron as Solo . very steamy

loved the story, loved the narration, now onto books 3 to find out what's next. still a cliff hanger but not as bad as the first one.

This cliffhanger was not as dramatic as book 1 but i still dived right into book 3. These 2 characters are on fire and can't wait to get the conclusion.

Story: The natural flow of the story was very well done in this series. We jump into the plot right where it was left off. I loved the emotional side of the MCs that came out more and more in this part. The authors did a great job capturing the development of the relationship. Narration: Very good dual narration.

Part 2 of this scintillating tale narrated by champion narrators Fox and Snow. Everything you'd want from a follow on. Well done Audible another gem, but I'm not amused to find this story is in 3 parts with the final part not available yet! No HEA or HFN ending in this book! You must buy Book 3.

The narrators are perfect for the characters

Loved the audio - the instalments are pretty quick listens (between 4 - 4 1/2 hours), but the narrators are fabulous so I was more than happy to upgrade to the audios. Panther & Solo open up to each other more in Need for Speed, their relationship starts to progress more towards the serious side. Panther is struggling with the aftermath of the event that occurred at the end of Danger Zone (that cliffy ending!), but Solo is there for him to lean on. I loved the cliffy ending of this one, didn't quite have the shock factor ending the authors went for in Danger Zone but it represented well the direction the relationship was heading for Panther and Solo.

I really enjoyed listening to Need for Speed and I’m loving the relationship between Panther & Solo. Straight onto the 3rd book. 5 very hot stars 🔥🔥🔥