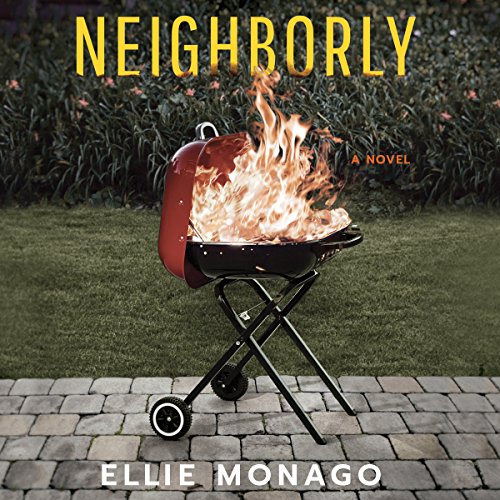 A not-to-be-missed novel of suspense about the secrets hidden in a young couple’s new neighborhood.

Kat and Doug felt like Aurora Village was the perfect community. Minutes from the city, affluent without pretension, low crime with a friendly vibe - it’s everything Kat never had, and that she’s determined to provide for her infant daughter. Snagging a nice bungalow in this exclusive enclave was worth all the sacrifice. But everything changes overnight when Kat finds a scrawled note outside their front door.

That wasn’t very neighborly of you.

As increasingly sinister and frighteningly personal notes arrive, each one stabs deeper into the heart of Kat’s insecurities, paranoia, and most troubling, her past. When the neighbors who seemed so perfect reveal their open secret, the menace moves beyond mean notes. Someone’s raising the stakes.

As suspicious as she is of every smiling face and as terrified as she’s become of being found out, Kat is still unprepared for the sharp turn that lies just ahead of her on Bayberry Lane.

What listeners say about Neighborly

Weird but not a good weird

This book is about a woman, her husband, and her baby relocating to a dream like suburban community with neighbors who have secrets. Although she doesn't know it, she has enemies from her past who also live there and will stop at nothing to see her leave. That's why I bought the book. Unfortunately, the neighbor's secrets are implausible and just plain stupid. I credit the narrator with making me listen, but I couldn't stop rolling my eyes. This is a solid NO from me. Wish I had the credit again.

This was such a disappointment. I’ve never written an unfavorable review, but then I stumble upon this book. I wanted to finish the book since I bought it, but no amount of money is worth torturing myself. From the robotic, monotone narrator to the poorly developed plot, it was the worst book I’ve read. As an English teacher, I read many books... so that’s speaking volumes.

I will say I enjoyed the beginning and the middle of this book way better than the end. It did the things up nicely in the end but was totally unbelievable. Just seemed that everything was so tidy and so easily achieved which would never happen in real life. I enjoyed all the characters and they were easy to follow, the ending just derailed me though.

if ur looking for something with a good twist and no graphic sex, you’ve found it!

this is light listening at its best. i personally don’t mind a sex scene here n there but the really graphic stuff gets old and skipping thru gets older still. it was nice to just enjoy this one!

This book was really good! I related to the main character as we are both introverts. Some of the storyline was over the top but all in all it was a good beach read/listen.

This is the dumbest book I have EVER read. Main character insecure to point of ridiculousneas.

Well it’s hard to give a decent review without spoiling the plot so I will be brief.Only two comments.

1. Avoid books where characters compare themselves to animals. Mama bears have teeth and claws and hundreds of pounds of muscle. You don’t.

2. This was my first audible book. The narrator did a good job. However when the book began Doug sounded like a character from cartoons, Goofy, or some equally doofus character. However as the book progressed, Doug’s voice changed into something more believable. (Or Doug revealed himself as a doofus in fact - not sure which) Good work. And every time the main character spoke about her baby, it was so syrupy sweet that I wanted to slap her. Ah well, my first introduction to Mom lit.

Summary: more like a 3 3/4 stars. Summer read or listen

I loved it.. it started slow but you have to give it a shot. I couldn't stop listening

This book was a trip

I enjoyed this book. It started out interesting enough but mild however I know something crazy was laying just under the seems. even with that knowledge the end was pretty shocking. overall the story was off the chain.

I was pretty much enjoying this book until towards the end when it broke down and became rather silly and ridiculous. Until that point I thought the writing was good, the story engaging and interesting. Good degree of psychological tension. Many good turns of phrase. I think the author has a lot of potential and really could have done a much better job with the ending.

Throughout the story There was a lot of focus on the very young children in the neighborhood which I enjoyed a great deal, their little personalities and what not, and that was a big part of what kept my interest.

I think I recall a lot of negative reviews with regards to the narration, but I thought the narrators were good! Although I didn’t realize there were two of them!!

I may try the follow up to this book just because I do think the author has a lot of potential and perhaps there will be improvement in this next in the series.