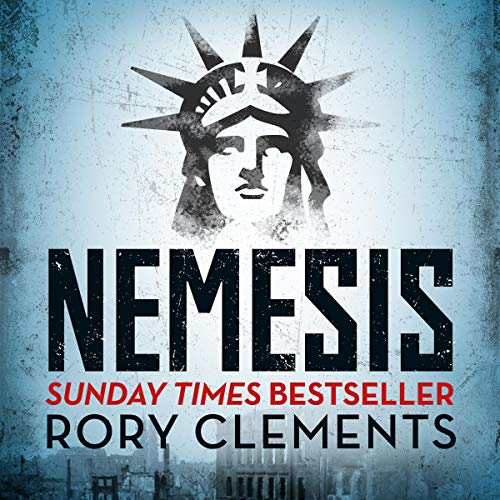 From the author of the 2018 CWA historical dagger, Nucleus.

Can a ruthless spy ring change the course of war?

In a great English house, a young woman offers herself to one of the most powerful and influential figures in the land - but this is no ordinary seduction. She plans to ensure his death....

On holiday in France, Professor Tom Wilde discovers his brilliant student Marcus Marfield, who disappeared two years earlier to join the International Brigades in Spain, in the Le Vernet concentration camp in the foothills of the Pyrenees. Wilde secures his release just as German tanks roll into Poland.

Meanwhile, a U-boat sinks the liner Athenia in the Atlantic with many casualties, including Americans, onboard. Goebbels claims Churchill put a bomb in the ship to blame Germany and to lure America into the war.

As the various strands of an international conspiracy begin to unwind, Tom Wilde will find himself in great personal danger. For just who is Marcus Marfield? And where does his loyalty lie?

For listeners of Robert Harris, C J Sansom and William Boyd, this is a thriller that will keep you on the edge of your seat - by Sunday Times best seller and author of Corpus and Nucleus, Rory Clements.

What listeners say about Nemesis

Characterisations and dialogue more akin to that in a teenage comic. Fanciful plot lacks any credibility.

These books are a great read and should be made into a film. gripping thriller with believable characters

Lost in another world

This the third book in the series was as the other a delight. It’s rare one is immersed in a story to the extent that one does not want to come up for air. I got lost in this story and can only hope number four is in full development.

I have enjoyed many of Rory’s books in the past but now have quite captured me like these.

The performance of Adam Sims is excellent, his voice differential between characters is spot on. I hope this partnership continues as the series DV continues.

I enjoyed this. I came to it after listening to the first two books in this series and the same qualities were here too. This is well-constructed, with a tense story which does not have to rely upon implausible coincidences or a bashy-crashy superhero to make it work. There are some great set-pieces and a solid, evenly paced narrative, superbly rendered by Adam Sims.

If I have one criticism, it is that this is very like the other two stories; Prof Tom Wilde follows the trail of some suspicious murders, uncovers the dastardly plot to do something splashy, rides his trusty Rudge motorbike recklessly through the Cambridgeshire countryside and saves the day, some genuinely unpleasant acts by the bad guy to eliminate any residual support, followed by a reckoning with the Prof. Am I being churlish? Isn't that the plot of every thriller? Maybe, but at the end of this audiobook, Rory Clements shares his thoughts about the period he writes about and promises to read every review. So, dear Rory, please don't let this wonderful series, so well-written, become "samey" too soon?

This was my first Rory Clements book and it was very enjoyable. He weaves the atmosphere of the early war years very well and has written a complex story around historic facts. The whole tone of the book is very different to novels set in current times. It has a calmer, less frantic effect. Details of crimes, evidence, forensics and the almost casual way of exchanging information between interested parties, are very different and almost jarring compared to modern police procedure. But this adds to the overall charm of the book. It’s also easy to imagine that this kind of thing could happen pre WWII, but would be frowned upon today. All in all, although the story is quite gritty in places, I came away feeling that it was a gentle listen.

good story, well narrated but truncated ending as if the author had run out of steam

Really good story line and strong characters. can be listened in isolation although would recommend listening to the other two novels beforehand.

Not my cup of tea.

I struggled with this book. The plot was utterly incomprehensible and overly truncated. The characterisation, for me, was a bit disappointing. Not my cup of tea.

l listened but struggled with the story line.

The narrator's accent was annoying to listen to.l also struggled with the story line but persevered in disappointing hope.

This is the first book i have heard in the series. I was unsure what to expect following the Shakespeare series but I wasn't disappointed. Looking forward to Corpus and Nucleus, many thanks Rory Clements

I loved it. Great addition to the series. Hope there's more!! Rory Clements is superb !